Lousy night again – it seemed every of the few minutes I managed to get any kip was dream filled but I can’t recall any of them.

Felt rather confused when I awoke to visit the porcelain and had a wobbly (Dizzy spell) then realised I could hear the wind outside… and I have the Iceland delivery then I want to go to see about the camera-pens and go to the Nottingham Hospice shop with some bits… my mind was racing with nothing really. Bit worrying at the time, calmed down now.

Laptop on, medications taken with water and set about doing the posts for the WordPress, Inchcock diary and to LOMM site.

Even got a wobbly when on the laptop then… Tsk!

Did some graphics and Facebooking.

Got ready to go for a bus-ride using me free pensioners bus-pass of course, instead of a walk into town in case the dizzies return later.

Caught the bus into town and had a hobble around the shops for a good while. Took some photos of interest.

I called into Jessops camera shop to get a new SD-card… why? Because I realised I’d took me camera and had not got the card in it… Tsk!

The chappy-fella put init the camera for me and I was off walking all over Nottingham taking photo’s of bling, buildings, trams, cyclists on the pavement, Nottinghamian citizens crossing the traffic lights on red etc.

Really enjoyed doing them, and no dizzy-spells either – good stuff.

Then I hobbled to the Menkind shop and found they had some Camer-watches on sale at £50. One for later after spending on me SD card, I took a photo of one with me old camera.

After walking around for a while I called in to get me Lion bars and they had sold out! Swines!

Hobbled up through Square and took some photo’s of the pigeons and two CPO’s holding hands?!?! 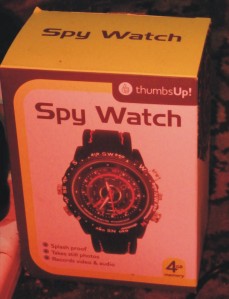 Caught the bus back to Carrington, slipped the pigeons some seed on me walk back to the hovel and kettle on, visit to the WC and upstairs laptop on and got me SD card out to transfer photo’s to Coreldraw9 to use here… message came up that told me the SD Card had to be Formatted before use… so I lost all me photographs wot I’d painstakingly taken all day, apart from the one of the watch-camera – and that came out horrible on the old camera!

Decided after downloading it the search for the old SD-Card began, and within an hour I found it on the stairs behind a bottle of sauce – Don’t ask please!

I put the formatted card in the new camera and couldn’t get it out again – after much angst I had to use a screwdriver to gently encourage it to come out. Huh! Back to the shop tomorrow for advice.

No INR level checks this week, they have given me a fortnight.

Then the search for the new camera started – I knew it must be in the bathroom cause I’d used it minutes before!

At this stage I began to question whether or not Alzheimer’s was approaching a little faster than expected?

After searching upstairs downstairs all rooms (There’s only four), clothes and shopping bags, depression frustration and suicidal tendencies grew stronger… had I lost it all together today?

Not giving up eventually I found it… it had fell behind the toilet porcelain on the floor. Oh dear! Being deaf I never not heard it fall see?

So well annoyed with everything I started this diary, then the light bulb blew!

Fetched the spare bulb, step ladders and returned with them – treading on me reading glasses as came back into the room…

Well and truly had enough now!

Changed the bulb without any mishaps, picked up the beyond repair spectacles and made another cuppa and took me medications.

Tomorrow may be a busy day I thought – Laundry, the Clinic, Back to Jessops, to the Opticians… good job the INR level tests were cancelled by the NHS I say, oh and the Dentists, blimey let me check… no that’s on Wednesday 1200hrs.

Sandwiches tonight… if I ever get time to make em that is – got some cheapo smoked ham from Friday wot I got to use up.

Remembered to put the new camera on charge.

Must do some Facebooking now. Too tired to do the planned blog I wanted to.

Huh, what an ‘orrible day!