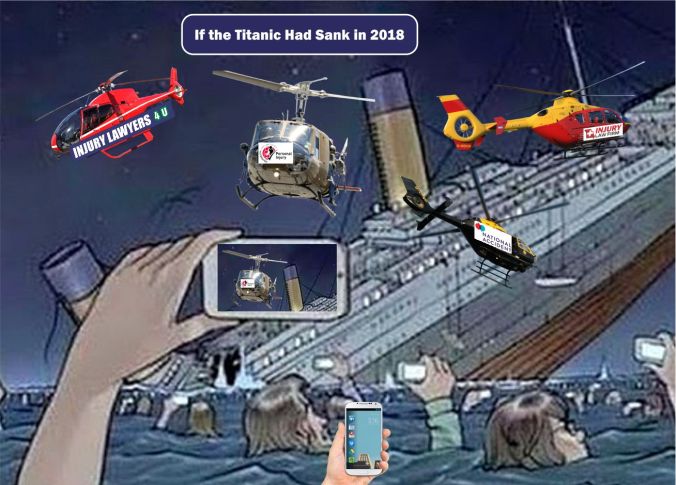 0156hrs: Woke with rumbling innards, a headache and once again, knowing I’d had some emotional dreams, but actual recollections of any details. I hate it when this happens! 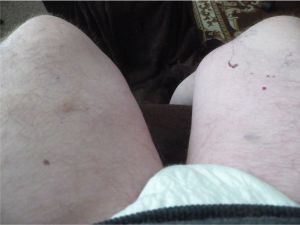 I flung back the throw on the £300 second-hand recliner and observed two things immediately. The first being that after telling the nurse on Wednesday that the bruises, spots and blemishes had stopped appearing on the legs and arms, they were back again. Tsk and Humph!

The second, very welcome and cheering detection, was no blood showing on the PPs! Well, if there had been any bleeding it would be minimal because it hadn’t come through to the outside.

Started sneezing, the stabbing and rumbling from the innards increased in severity and I felt suddenly tired and weary, and I’d not got up yet? Plus, I’d only just had a decent five-hour sleep? This did not augur well. A most unwelcome degringoladé.

I escaped out of the £300 second-hand recliner, again with no hassle or stubbing of toes. Off to the kitchen and did the Health Checks.

The temperature on the window ledge thermometer indicated 1°c inside. It looked a great deal less outside. But I resisted opening the window to take the morning photographicalisation. Too cold! Hehe!

Before I could take the medications, a rumble from the innards turned into an explosion almost, and I poddled straight to the Porcelain Throne. An easy evacuation this morning, no extra cleaning-up duties required. I was tickled-pink at Little Inchies lesion barley bleeding at all. But gorgonised when I realised the back of the PPs was deep red. Harolds Hammorhoids counteracted the joy of the fungal lesion not suffering much. Tsk! 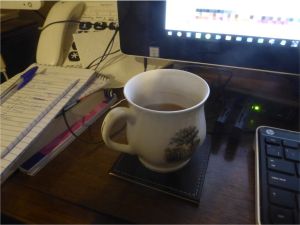 Adorned new PPs, washed and back to the kitchen to make a brew of tea. Took the medications.

On the computer, that was very slow today.I needed to get the top page funnies done for the advance diary drafts, then the drafts themselves done.

Also. The paperwork had mounted up enough to worry me a little. Endless letters, bills etcetera in need of reviewing and then filing away.

And the builder’s notices relating to heaters, cladding, windows, balconies, times and ETAs, Nottingham City Homes about rent, social events, the Fire Alarm Strobe, training days, Sprinkler installations, New Communication System set-up… All too much for me to tackle, comprehend or understand, at this moment.

The blog demands needed catching up with first; I thought.

0609hrs: Made a brew. Then on CorelDraw to get the page tops all sorted for the advanced drafting.

0915hrs: I’ve still not got the top graphics all done. The concentration is still not right. Errors and mistakes.

I put the kettle on and sorted the waste bin bags out. Took three of them to the refuse chute, and returned to make a mug of Assam tea.

Back to the computer, and Herbert upstairs started knocking and tapping again. The weekend once more, innit. I’d love to know what it is he’s making.

Opened a tin of tomatoes into a saucepan. Added a drop of balsamic vinegar and white wine vinegar and vinegarette to them. Chopped some fresh tomatoes up and combined them with some tomato puree and basil. Crossed fingers, it will taste alright. I’ve got some streaky smoked bacon to go in the oven later, and I’ll add these to the saucepan after they are cooked through properly.

0944hrs: Back on to CorelDraw and designed the last graphics needed. Then started on WordPress to get the drafts done.

1054hrs: Got all of the page headers and finished off. At last!

Made another mug of tea did the WordPress reading. But WordPress would not let me, the page did not open. Tried on Google and got in, so I replied to the comments while on there, cause Firefox will not allow me to. But Chrome will not let me edit, well, it will, but it will not save?!?!?!

I fear a calamity is due here.

Had a go on Facebooking, fingers crossed. Computer slow again.

Had a dizzy. Too long on the computer perhaps. Turned everything off and got the nosh going. 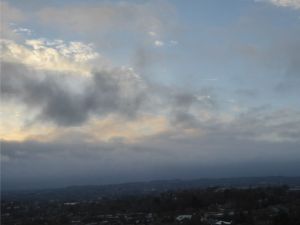 The skies threatened heavy rain, but it didn’t arrive. Just a few spots here and there.

Noises from above again, no idea where from really, though.

Felt very vague and airy-fairy suddenly. Took a while for this sensation to leave.

Checked the bacon in the oven, the tray bottom had a quarter-of-an-inch of water in it. How much water do they put in bacon nowadays? It needed longer to try and crisp it up.

Turning the rashes over, I found out how hot the water was. Huh!

Everything tasted great, I thought I might have overdone the seasoning in the tomatoes, but it was alright. The bacon wasn’t crispy enough, but still enjoyable. The expensive sourdough bread I’d bought from Sainsbury’s was terrific and flavoursome. 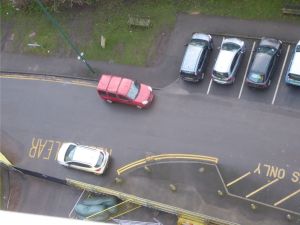 Washing the pots and I thought I heard screaming from outside, which confused me cause twelve-floors up, there is no way I should have been able to hear it?

I had a look out of the window but could see nothing untoward. Well, apart from the hilarious parking of the resident’s vehicles blocking safe access for any emergency fire brigade vehicles.

I could concentrate on nothing much now, fatigue and weariness dawned. So I did the Health Checks and took the tablets. Then, got down in the recliner. Put the TV on, assured that this would help me fall asleep, which it did.

Regrettably, after I’d sank into slumber and was in the middle of a dream involving Nurse Nichole; The flipping Strobe and Pillow shaker fire alarms activated! Humph! Of course, this meant struggling out of the £300 second-hand recliner, stubbing my toe en route to the door of the flat, checking the handle with the back of my hand for any heat, opening it, and listening for any activation alarms. Then going to the kitchen window and opening it and looking for signs of any Fire Engines attending below, then trapping my finger in the frame as I closed the window. One more final stubbing of the same toe as I went in the wet room for a wee-wee. The alarm had not gone through to the monitoring station anyway.

Getting back to sleep proved impossible. The mind had been disturbed and gone into one of its “Fretting, worrying, fearing about everything and nothing modes. Grr!

I think I watched more TV in one go than I have since I bought the TV set three years or so ago. It was all puerile hogwash being shown, yet I just lay there hoping that some slumber might be on the way for me.

I decided after I don’t know how long, to get a drink of Clementine juice from the fridge. Bad decision. Another toe-stubbing suffered! Yet again the left big toe! Of course, this was throbbing away now, so nodding off took me ages and ages…