0430hrs: Woke up and waited for the brain to join my activated torso and limbs. It took a while longer to engage this morning, but some clarity showed its face when things gelled. Well, I say transparency, perhaps a more appertain phrase would have been an opaque translucency, which confused the grey cells at first.

I got up out of the £300 second-hand recliner and made my way for a wee-wee, which turned out to be almost a life-saver.

: As I was getting to the wet room door, things started to evacuate of their own accord from the rear end – Again, how I got on the Porcelain Throne in time, I don’t know, but I managed it.

: Unfortunately stubbing my toe and banging the left kneecap on the porcelain bowl in my panic, and then cut the back of the same knee on the sharp corner that the plastic corner-protector I’d knocked off on my hurridly getting myself down on the seat, had been located. Nebekh!

Cleaned up and went off to put a Dia-Limit capsule to take with the morning medications. Only two left now, I must get out and purchase some later on.

All the reading had gone up a tad.

Perhaps the kerfuffle with the Porcelain Throne evacuation and knocks and bangs just encountered were the reasons for these increases. Possibly a good sign?

: Oh, heck! I went to take the medications and discovered I had missed taking yesterdays morning doses. They were still in the Thursday section of the weekly dosage tray. Schlemiel! At least with offered up a possible reason for the (At the time, confusing) dizzies and shakes I suffered last night? Tsk! 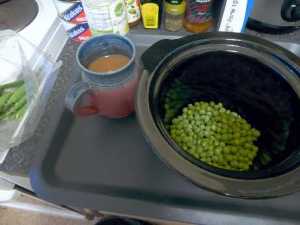 I’d let the tea get cold, so made another brew.

Then, I got the pod peas podded into the crock-pot basin, covered with water and added some demerara sugar to them.

Back for another wee-wee. (Beginning to wear at me all this urinalisationing you know. Haha!)

The forecast I looked up on the web, is for some thunder and lightning. Found this site giving advice on What to Expect, for the proletariat scum, shoplifters, muggers, druggies and the more senile, older ones of us.

Well, such expert advice is much appreciated. Humph!

Better get with this blogging updating before the Virgin Internet goes down and the lights start flashing, like last time we had a storm here. (Long time ago now!)

Must get to the opticians with the frames, buy some liquid-soap flakes and Dia-limit capsules too. Before the storm forecasted starting time. I suppose living up here in the sky closer to the lightning might mean more chance of being hit, or should that be less?

Bet the lads won’t be up on the hoists working outside today. Well, it the storm is as bad as predicted, I hope they will not be working high-up.

0510hrs: Turned on the computer, to find that Liberty-Virgin internet was down again! Fancy That, what chance of it working when the storm arrives… come to think of it, if it is as bad as they think it will be, I’ll turn off and unplug everything methinks?

After the failed rigmarole, folderol and ado of getting the Virgin Internet service (Hahaha! ‘Service’ I said – Hehehe…) back on, I think it just returned of its own accord, I got on with updating this post.

Then to finish off the Thursday blog.

Made this TFZer graphic for the folks on site. Please let ’em like it!

I can hear and see that the workers are out on their platforms.

Getting late now, I’ll go and get the ablutions tended to, then go out to get… I’ve forgotten what I was going out for now… A good job I wrote it down earlier to look at, innit. Tsk! Liquid soap flakes and Dia-limit capsules. I’ll write that down on my notepad and put it in my pocket now, while I remember to.

Back in a while.

Bertie, the Ironclad Mini-biting Beetle, kept me company while I did the ablutions, bless him. By Gawd, he’s quick!

Sorted and took the rubbish bags to the waste chute as I left for the bus down to Sherwood to get to the dentists and get Dia-Limit capsules, Spring Water and get the spectacles repaired.

No signs of any rain or storms as I got out of the lobby on to Chestnut Walk.

I espied the caretaker, leaning on a barrier. I bade him good morning (when will I learn not to bother). His being in his standard position on his mobile phone was the most likely 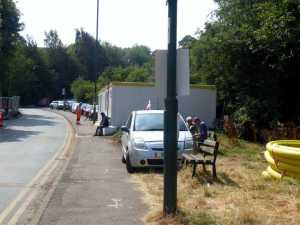 reason I got no response.

The lads were making the best of the sunshine while imbibing their cans of extra-strong lager and roll-up cigarettes were there again on the bench. Jealous? Me? Well, maybe a little bit. Hehe!

I took a photograph of the upgrading work taking place on the new Extra-Care unit being built, to block out the view and light from the old flats either side of the new unit being erected.

Sunny and warm again, I made my way towards the Nottingham City Homes, Winwood Heights,  Obersturmbannführeress Wardens Temporary HQ, Willmott-Dixon workers breakfast, and tea-break room, Sarcasm & Insult distribution area. Tenants Socialisation Shed, Telling Inchcock off Zone, Things like porcelain and pottery get to be stolen from, and somewhere to rest while waiting for the bus, hut.

I had a chinwag with some of my fellow and fellowess tenant while waiting for the bus. I enjoyed them.

On the ride down into Sherwood, we had a few laughs between us.

Still no signs of any coming thunderstorm yet.

I went to the Wilko store, where I forgot to get some liquid-soapflakes! Humph, Nebekh! But I did get the Dia-Limit capsules, extra strong Bacofoil, and some spring water. Paid the lady and departed £15 lighter.

I popped up the hill to the Opticians and asked the lady if I could leave my broken spectacles with her for repair. The gal said she would take a look at them straight away. Bless her cotton socks.

She returned ten minutes later, with the spectacles all mended and cleaned up again. She checked on the new glasses ordered and being waited for, telling me they should have been here by now, and she’ll check with them later. I thanked her.

I strolled further up the hill, and the moment I arrived near the bus stop, a number 40 pulled up. What good fortune. Now I don’t have to walk all the way back up the hill, and I got on to ride the few stops to the top of Winchester Street.

Caroline, the lady from the Private Care Home on Chestnut Walk, we got off at the same time. We had an amble up together chinwagging away merrily. Bade her farewell as she went to her own home, and made my way along to the flats. My having to use the road to hobble on, of course, the pavement was still blocked off. 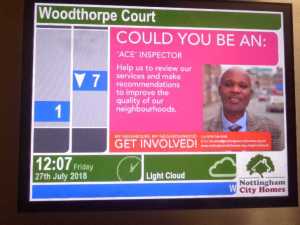 Got inside and to the lift.

The electronic sign on the wall was still not indicating any weather information.

When the lift arrived, and the doors opened, the squealing noises caught me out and made me jump a bit.

Got up to the flat and had a wee-wee, also took a Dia-Limit capsule.

Put the bits away that I’d bought. Some bargains amongst that lot I thought.

And, as well as and besides, I got the glasses mended for free!

Did the Health Checks and a bottle of spring water from the fridge, to drink while on the computer updating this blog.

Part boiled the potato cubes, added some bacon bits and garlic, olive oil, rosemary and black pepper. Put some potato waffle letters in the tray with the potatoes, placing TFZ on top. Hehe! Added some Peri-Peri BBQ marinade sauce. And got it in the oven. The peas are simmering now.

Made a Morrison order for next Thursday.

Took a picture when I looked out at the weather, no sign of any storm or rain yet? I could not help but to go on CorelDraw and make a ghostly Dalek and added it.

Hahaha! Any suggested titles for it, please? 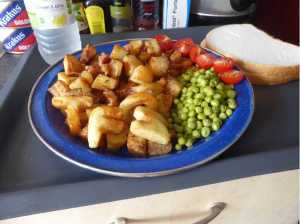 Got the meal served up on the tin-plate. The TFZ in the potato letters might tickle the funny bone of members of the Troll Free Zone, I hope.

It took a lot of hassle to get this one done, and amazingly it came out alright.

A Flavour-Score of 9.55 was given it after I gobbled it all up. Must have been good, for this is the first meal I’ve fully eaten for about a week now. The Peri-Peri BBQ marinade was costly and only a small amount in the bottle, but I might try this again later if the ticker keeps going. Hehe!

Put the used tray on the other armchair, and got up to do the pots, but I took a picture through the air blocking and view limiting bird-poo covered new unwanted balcony inner window.

Not that I don’t appreciate the cost, thought and work that is going into upgrading the flats and building the new extra-care block that removes the views and light from so many apartment windows.

Took the medications and did the Health Checks.

No storm or rain has arrived, perhaps it will come later in the night or morning.

The nerves and fretting started suddenly out of the blue, for no reason that I could see or find.

This meant sleep was out of the question, as the mind went off worrying and failing to create any of the wanted answers to so many of my problems, it even started Duodenal Donald off.

I had a few swigs of the weak ineffective and impotent antacid medicine. I need not have bothered. I took an extra painkiller. All, to no effect pain-wise.

As for the grey-cells, they were in turmoil. I have no idea what rubbish I had on the TV, but for some reason, I kept it on until well gone midnight. I kept fetching bottles of spring water and cans of pop from the fridge.

Not one of my best nights. Tsk!