00:25hrs: I awoke abruptly, to find the grey-cells were battling with emotions, fear, worries, etc., all at the same time. Some thoughts were critical, others of absolute nihility. I tried to gain some control over the mishmash of twisted, illogical input to the brain, without much success,

Not that this mattered much after I glanced at my second-hand bought from the charity shop £2 watch, now attached to its new £10 strap, to check the time. Klutz!

The back of my left hand,  had nocturnally developed many tiny blood spots?

Many ideas and silly thoughts flowed into my mind, as I pondered on what might have caused this. Had the cunning Weevils increased the strength of their jaws, and we now capable of penetrating the skin? Later, I looked them up on the web, and found:

I have no itching, so nothing to fret about after all. I think? Hehe!

Off to the Porcelain Throne. I’m reluctant to go into too much detail about this evacuation. But feel I must this time, to link things to some rationalisation of why it was like it was. Does that make sense? However, the funny side being that rock-hard mini-rugby ball shaped things painfully parted presence with the pancreas, to the Porcelain. Nice to be able to report there was no bleeding, though. I perused a full chapter of the Clarkson Unofficial Biography book for the proceedings were completed.

I considered that perhaps the Soya lumps I ate last night in my homemade stew or whatever it is called that I brewed up, may have an effect on my Porcelain Throne evacuation?

I cleaned up and found just one dead EIBWBBB (Evil Ironclad Boll-Weevil black biting beetle) in the wet room.

Having been often fooled often before by the perspicacious, fiendish Weevils, into thinking they were losing the battle, I still used up some more Bug Killer Spray.

Into the spare room for a Weevil reconnoitring 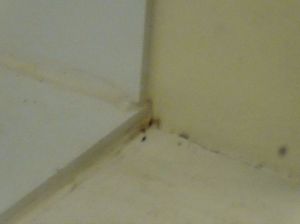 I found about six EIBWBBBs in the spare room! Gathered around the hole in the sealant that they left me when they put in the new windows.

This increased EIBWBBBs liveliness and movement in the spare room resulted in my using up a full can of the Sanmex bug killer in one go. The usual coughing session followed.

Rinsed up and got the Health Checks done. Took the medications, the made a brew of Yorkshire Tea.

A second summoning to the Porcelain Throne arrived. Back to the wet room. One more EIBWBBB spotted as I settled on the Porcelain. Amazingly, the evacuation was back to the sloppy but full-bodied variety! The nugget shaped things had gone? I was a little doubtful as to why the sudden change?

At last, I got around to updating the Friday Diary, and…

It was hard work for hours, getting the blog finished off. I had to redo a lot of stuff thanks to Virgin Media not allowing me to save work I’d just done. Perseverance won the day finally, and the internet became a little faster… No, that’s not right, I meant a little less slow. Fehl!

I got the mushrooms in the pan with some balsamic vinegar, light soy sauce, and distilled vinegar.

Went on Facebooking, adding photos and on the TFZer site.

Then on WordPress Reader.

I did some CorelDraw prep work and the

So I did the Health Checks and took this photo of the view from the kitchen window.

Took the medications and had a look to see if anything worth watching was on the gogglebox.

Got the fodder prepped and served up. 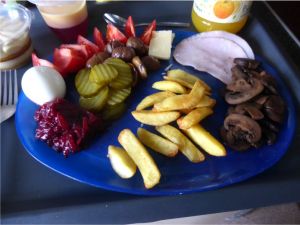 As I eating this meal, I felt the weariness getting worse. I didn’t even eat it all up, and there was not a lot to consume.

I managed to get the last Health Checks done and wash the pots. By which time, I was feeling shattered, zonked, and ready to drop.

Got down in the £300 second-hand recliner and things got worse for me.

For six hours, all I did was shake, shiver and kept waking up every ten-minutes… well it felt like that. Then the SSWWs started, and over the following four hours or so, I lost count of the trips to the Porcelain, for both activities. The rear end evacuations were back to the messy liquid stomach unsettling kind. After the last visit to the Throne, I got back down again to tried desperately to get some sleep. Humph! Not Good!