23:45hrs. It didn’t take long for the brain to recognise the desperate need (Yet again!) for the post-prandial use of the Porcelain Throne! For some reason, Arthur Itis was in a bad mood, and both knees were not keen on movement without pain.

But, I had to get through the discomfort and to the wet room and Throne – where I had to go through the same with the evacuation. A red-hot, burning and seeming at times to be an endless evacuation. It took a lot of effort, and the blood flowed.  I really must mention this to the nurse at my Warfarin blood test later, and add it to the QMC Anticoagulation Haemostasis and Deep Vein Thrombosis Clinic notes! What a mouthful! Haha!

After cleaning up,  I spotted and collected several EIBWBBBs (Evil Ironclad Boll-Weevil black biting beetles) from the wet room floor, all deceased. But they did look well-fed and fatter than usual to me?

And I really was starting to think that the Weevil War was over, as well. How come there were so few over the last few days, and now they counter-attack, yet again? It’s a good job I continued to spray the Santex every day! The cunning, mendacious, not-so-little-now,  mites!

Got the Health Checks done, and then updated the record on Excel, for last week and today.

I worked out that I had to get the ode idea and diaries updated quickly. Because the INR blood test is due at 0815hrs today, instead of Tuesday, that being Christmas day.  Which means I’ll have to get the ablutions done at 0630hrs, to give me an hour to get the ablutions done, dressed, the nibbles ready, so I leave at 0720hrs, no later in case Arthur Itis gives me any bother, I have a feeling he will. Allowing me, about 55 minutes to walk to the surgery.

I got a message from Tim Price, pointing out about my temperature record being too low. So today, after the visit to the nurse, I’ll call in a chemist and get a new thermometer, hopefully, an in-the-ear one. And check on how to use it properly. Thanks, Tim. I turned up the heating on the radiators in the kitchen and computer room.

I got the weekend post finalised and sent off to WordPress. Then did the funny ode and photograph post was done.

Made some brekkers again, for a change. Sausages, tomatoes and bread thins.

I realised I’d forgot to take the morning medications, so I did so, albeit a little later than usual. What an Utter Eizel!

My EQ told me that the Whoopsiedangleplops were not finished yet. There may well be ululations aplenty to come! The old EQ is rarely wrong, I’m afraid!

I tended to the ablutionalisationing. Not as refreshing as usual, with me not being able to use the noisy shower with it being so early in the day.

I could not take the five black bags of waste to the chute for the same reason, not wanting to disturb the other hostages… I mean residents. Hahaha! But I put two empty rinsed jars and the bag to drop in the recycling bin on the way out and took the white bag of recyclable stuff to place next to the caretaker’s door. Int life awkward, sometimes?

I got to the lift and down into the foyer, to find Cyndy doing her laundry, which cheered me up, having a little chinwag usual does that to me.

Tsk! it dawned on me that I had not put the hearing aids in! Back up to the apartment and collected them. Back down again, and said my farewells to Cyndy, who had kindly waited where I’d left my bags on the floor in the panic when I shot off for the aids, to watch things for me. Bless her! Thanked her, and set off out into the gloomy but beautifully coloured morning. I got about 50 yards and…

I’d not taken the anticoagulation form with me! I’m running out of names to call myself without using naughty words. So many Whoopsiedangleplops this morning! What a nayfish! Back to the building and up to the apartment yet once more. No luck in finding the form, it had disappeared. I could blame the Weevils, but that would not be feasible. Hehehe!

Finally, at last, I set off again!

The colouring as I limped along Chestnut Walk was still looking amazing as I took this photograph.

The plates-of-meat were already stinging after all the extra ups and downs due to my malfunctions, botches and bungles, so far! 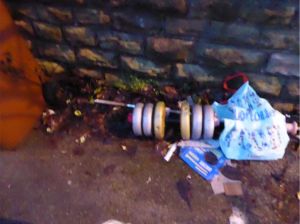 A short way down Winchester Street, not far from where the Mystery Boots Fiasco tool place, last month, I came across some Nottinghamian Street Art with a difference.

I’d have had a peep at what was in the bags adorning the artwork, but if I delayed now, I might be late arriving at the surgery, and my EQ told me that it was not going to me Nurse Nichole in attendance. (I later found out it was right again!).

I hastened with the feet getting ever increasingly pained, Tsk! Down Winchester Street Hill and turned right onto Mansfield Road.

Being the day it is, and the buses on a Saturday service, I was still surprised by the lack of traffic and pedestrians about. I couldn’t even see any Nottinghamian Pavement Cyclists!

I exerted my short, Churchillian-like body and limbs to the maximum, and pressed on up the hill, down the other side and arrived at the Sherrington Park Medical Practice in Carrington, and managed it with two minutes to spare before my appointment time! Not bad, considering all the Accifauxpas and Whoopsiedangleplops I’d suffered. ‘Smug Mode Adopted! (Temporarily!)‘

I got the crossword book out and had a failed go at it. Fifteen minutes later, Nurse Ann called my name out from around the corner!

I cowered, trembled and cringed. But somehow or other, I struggled up and out of the chair, dropped my book into the bag and carried it with me towards her, as I smiled bravely! Heroic I was!  Intrepid, bold, daring, audacious, undaunted, I ignored her rushing me, and took my time as I followed her into the treatment room…

Where the stout-heartedness evaporated! My regular famously demure, coy, submissive, cowardly Mode returned. Especially as I had to tell her I had forgotten to bring the Anticoagulation form with me… then mumbled my way through explaining about the farce I had earlier in going back to the flat… My words meant nothing of course. Just one of her Prize-Winning stares thrown in my direction that said: “Oh, yes!”, stifled my words, and I meekly carried out her instructions to the letter without saying anything other than in reply to her interrogational questions. As for asking about the problems I was suffering with, the ankle and knee giving way, the temperature concerns and Dizzy Dennis’s attacks… I’d sooner have gone bungee-jumping than risk asking her. Hehehe!

I thanked her, gave her some nibbles and crawled away. I dropped some more treats on the receptionist desk and scuttled out into the now slowly changing morning light.

With a sky that I imagine would have been a delight to any Nottinghamian interested in the hobby of nephelognosy.

The chemist was not yet ope

n, so I carried on a bit and called in the Lidl Store. I wish I hadn’t now!

In the yellow painted retailer in this picture, the launderette, I noticed Big John and went in to have a chinwag with him for a bit.

A git of a Pavement C

yclist frit me as he belted by from behind. The Git!

On to the Lidl store. I wandered around, in no rush. I selected some salt & vinegar potato sticks, some mini-weiners, a cheese twist, and a baby pork pie (For Christmas Day breakfast, as has been my habit for years now). I got to the self-serve tills area and joined the end of a long queue.

By the time my turn came up…

Tsk! My chance arrived, and I moved as quickly as I could to avoid being Queue-jumped again and started putting my few bits through the machine.

I was having a problem finding the cheese twist on the price list on the screen, I could hear the muttering and tutting behind me… A chap leant on my shoulder with chin and told me which button to press to find what I needed, I thanked him, then he came out with a naughty four-letter descriptive word for me! Oh, dear, worra day!

I left the store in haste, despite the bag I was carrying. I went to the chemist who was now open. Big John was having a fag near his car, and few words and a laugh were exchanged. 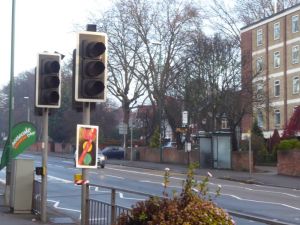 I went towards the pharmacy, to find it packed solid with customers. So I did not go in to get the prescriptions or a new thermometer.

The Pelican Crossing further along Mansfield Road was now out of order. The Flats in this picture, are named, Tavistock Court, has a little history. I remember them being built.

A former Nottingham Post journalist who travelled the length of England for free using only his old folk’s bus pass started his journey here.

The Post Code had only had 182 reported crimes last year. 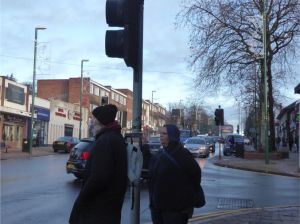 I walked, well, limped back to Sherwood and called into the Ozan International Food Centre.

The one with the large young lady who overcharges or shortchanges you when she can get away with it. But what a body!

I got a small sliced loaf (£1.49, but tasty!) pickled mushrooms and two tins of chilli beans for a quid.

Then I called in the Boots Store and got a thermometer. I couldn’t get one that went in the ear but got one similar to the old one.

The climb back up Winchester Street, took more out of me than I would have liked.

But I got up okay, with several stops to rest the corn, ankle and heel.

At least there were no Porcelain Throne needs while I was out and about.

The sky and lighting were so beautiful when I got onto Chestnut Walk. I took this decent shot of the Winwood Heights as the yare today.

Not many prisoners around, in fact, I didn’t see one on my way to the apartment, anywhere?

I got in, and still, no more demands for the Throne arrived?

I put the bits of food away and got the oven on a low heat ready to warm up quickly for the chips later on. I’m going to make sarnies with tomatoes to go with the chips. Unless there is a change of plan.

A lot of banging and knocking from up above today. Big John I suspect.

I did the Health Checks. I got both of the thermometers and used them straight after each other. Tried them both, and got 33.1° on the new one, and 31.2° on the old one! Threw the used one in the recycle bin! It looks like it was acting up, then?

I started to update this blog for a few hours, then decided I was too tired to continue. Poor old thing… Haha!

So got the chips cooking and made the ham and tomato sandwiches. A Flavour-Rating of 7.2/10, was given. Mostly for the wonderful tasting bread and the fries.

I spent about three hours watching the TV, about 70% of the time, asleep! Hahaha!

Woke up many times, and eventually gave up and turned off the telly.

5 thoughts on “Inchcock: Monday 24th December 2018: Weevils revenge, a Whoopsiedangleplop surge, and the mind wandered off on its own accord a few times. Tsk!”