When I rose gingerly and got on my feet to pick up the offending black plastic covered controller, the pain from the feet had significantly decreased, and a little joyous moment was enjoyed, as I realised what good my seeing and being tended to by Podiatrist Kirsty had done for me yesterday at the Health Centre!

However, and unfortunately, as I leaned on the stick and bent down, Back-Pain Brenda kicked off with some shockingly sharp stabbing pains! I almost fell off of the end of the walking stick with the shock-like shooting pains! The brain then began on one of its meandering usually pointless, in-depth thought analysationing sessions. How come, Arthur Itis, Reflux Roger, Dizzy Dennis, Duodenal Donald, Anne Gyna Prostrate Pete, and even Back-Pain-Brenda, have all been so kind to me since the Stroke? Fair enough, the Axonotmesis and Peripheral Neuralgia dancing and shaking have gotten far worse… and why should Brenda set-off so suddenly and badly again? Does the body control pain more than I thought? Has it somehow ignored some ailments after the stay in the hospital ward? Why? How? My questions were beyond my own understanding and made no sense, let alone the struggle for answers and recognition of the problems.

I found myself automatically using the EGPWWB (Emergency Grey Plastic Wee-Wee bucket) having a UWTWW (Unwilling-Weak-Trickling-Wee-Wee). And still, the brain was struggling with itself! After a good while of misleading and confusing myself, the need for the Porcelain Throne may well have helped me avoid going potty, I think! Off to the wet room, stick in hand. No Axonotmesis-inspired dancing or shaking from anywhere this morning! (Yet!) But, I was glad I had the sense to take the walking stick with me just in case, a sort of justificatory, safety-first thing.

I took a photo of the foot, and show it above, with yesterdays picture before the nail-cutting was done. Looking better, I think. Hence the previous agony just turns to pain. Hahaha! 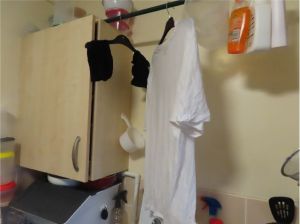 The khaki concrete-like resistant evacuation was painful again, but no blood. What things would be like without the Senna tablets I dread to think!

I got the hand-washing done, only the usual t-shirt and a pair of socks. I moved yesterday’s clothes to the airer for drying. No dancing or quivering from any body-parts!

tions, did the health checks then I made a brew of tea. The sphygmomanometer worked the first time, with impressive results: Sys 150, Dia 76, Pulse 89, and temperature at 34.8°c.

Taking a picture from the unwanted, unliked, hard-work new kitchen windows. The morning was not cold.

Then I got on with sorting the pod peas

. Shelling them and getting them in the saucepan with water and a little demerara sugar. Ready for cooking later on with the cheesy potatoes for Josie’s and my noshes.

A bit of bother when the fingers started playing up Peripheral Neuralgia wise. Peas flew about all over the place, some have never been found! Two were rescued from underneath the cooker, one behind the door, several on the floor in different places, ad in the rubbish bin, one in the dressing gown pocket. Two were found later in the sink on the other side of the kitchen! I work out that up to ten more are hiding somewhere, awaiting discovery and recovery. I even lost a couple of empty pods? Tsk!

I got the computer booted up, and began on updating the Friday post. The fingers were not too bad, so it was completed quicker than it has been of late. Which made it harder to accept, when as I was finishing off and posing the blog, the Peripheral Neuropathy inspired dancing and jumping started off in the fingers, hands, arm, and shoulder. I can’t remember having all of them together at the same time before and felt the EQ telling me that this is the future for me, so learn to cope with it! Which means eventually I suppose, an and to my blogging as things get worserer. Hey-ho! Sulky-Mode-Engaged! 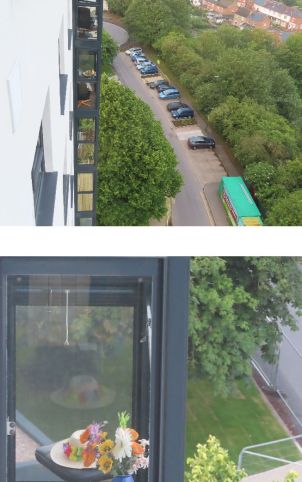 I made another mug of tea and pressed on. But it was really heavy work, and I got a little discouraged at times.

I got the potatoes cleaned and in the oven baking. Had another couple of UWTWW’s (Unwilling-Weak-Trickling-Wee-Wees), just to keep my eye in. Haha!

I popped out on the balcony, with the finger trapping closure, one that works one that is too stiff to open at all, the unreachable glass that needs cleaning and gaps in the panes of glass, and took two photographs. One of the view up Chestnut Way; showing free car parking spaces, which was a surprising rarity! The second one, a zoomed in shot of someone’s balcony, with some beautiful flower arrangements, one I think is on a bonnet. Very appealing and decorative. I would think this flat does not have a bloke on his own living in it! Hehehe!

Then back to starting this post going and updating it.

Got Josie’s nosh prepped and taken to her flat. Sh

The body and mind gave up after I’d eaten it all and done the pots.

The wee-wees were coming far less often now. Which pleased me, cause I’m not too keen on these UWTWW’s (Unwilling-Weak-Trickling-Wee-Wees).

I made a brew and took this picture from the unwanted and feared new kitchen window.

I settled to watch the Italy v Netherlands Ladies World Cup game on the goggle-box.

It seemed to me the Italians were uninterested in winning. Thought they had no chance. Or had been back-handed to lose the game. Take your pick! Hehe!

Watching the Germany v Sweden match, later on, Sweden deserved to win. The semi-final of Netherlands v Sweden could be an exiting one. The other semi, England v America, will split my emotions.

I got the hand-washing done.

As I stripped off to get my head down, I spotted what I thought was a piece of black sock on the left foot little toe. I struggled to get to remove it and had a losing battle. So I used the picker-upper stick and tried that…

It soon dawned on my confused, underachieving, rudimentary, reluctant brain, that it was not wool or bamboo bits, but a blood clot, gathering or papsule. Bottom of the little toe, underneath the tiny nail. Not more trouble coming, I hoped!

Sleep; or I mean getting to sleep, was more of a problem than ever tonight. Unless I dreamt it, and I don’t think  I did; I kept nodding off, and dreaming, then jumping awake again! But there didn’t seem time to have had a dream, for it appeared I was dropping off to kip for only a couple of minutes at a time? Taking ages to get off again, then having another dream… this repeated for I don’t know how long. But it felt like hours!

I had to rise from the £300, c1968 recliner for a wee-wee. Unfortunately another UWTWW (Unwilling-Weak-Trickling-Wee-Wee).

The dreaming and actual act of wee-weeing were no longer my main concern. After the wee-wee had been taken, boy, there was a right pestilential odour in the air! So foul, and took the grey bucket to the wet room and sanitised it, before returning it to the side of the Ottman, then tried once more to get to sleep. I would have had more chance of winning the Lottery, and I don’t buy a ticket! Hahaha!