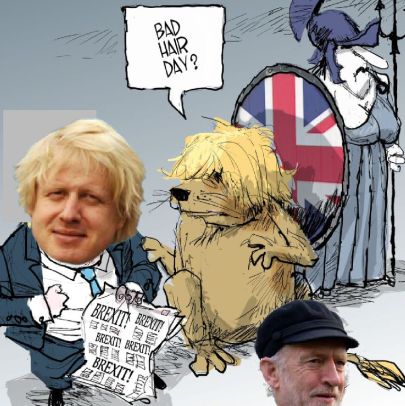 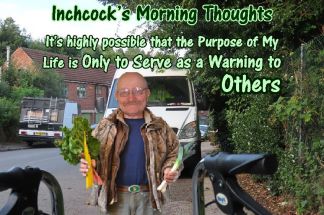 02:38hrs:I woke and lay there, delicately perched half-on-half-off, of the Brother-in-Law Pete, damaged while he was flat-sitting, when I was in the Stroke Ward, and he fitted new CCTC cameras, and searched for my valuables, which he found and took, (I still haven’t got them back yet four-months later), £300, second-hand, near-dilapidated, gungy-beige coloured, c1968, sometimes working, uncomfortable, rickety, rinky-dinked, rattling, rusty, resurrected, reconditioned, recalcitrant, recidivating and rotting-away recliner. Deliberating, and ruminating on life.

After a few moments cogitationalisationing, I got free of the recliner and swore a little, at the RAI (Rheumatoid Arthur Itis) with its set-in, dilatational, discomfort-bearing knees. I dismounted the not-working-this-morning, currently non-electric chair. I hauled my grossly-flabby bouncing with its excess body-flesh frame, into roughly an upright stance, cursing some more at the RAI’s pains. And nearly fell-back in the chair, when I stood on my slippers. Tsk!

Grabbed the stick, and off to the kitchen, in what must have looked an oddly over-cautious hobble. For the Peripheral Neuralgia leg and arm, were both doing a little mini, shuddering and shaking movements. I went back to the GPEB (Grey-Plastic-Emergency Bucket) and had a PWWDIB (Pathetic-Weak-Why-Did-I-Bother) mode leak.

Back to the kitchen, got the kettle on, grabbed the tablet tray, and checked the handwashing on the airer. Made the brew, opened the medications and returned with them and the tea, to the junk-room and got the computer going.

I had to start a template afresh for today. Make the graphics etc. two hours later, as I made another cuppa, the need for another wee-wee arrived… an what a shock this one was to me! It was a rare CMOUSTSTBOWV (Catching-Me-Out-Unwilling-Slow-To-Start-Then-Blasting-Out-With-Venom) session. Core blimey!

I started the updating of yesterdays blog. The juddering-shaking shoulder joined the arm and leg in giving me bother. But the fingertips were maintaining their sensitivity to touch, which as a relief.

Got the updating finished and sent off to WordPress. Then went on TFZer Facebooking. During which, I took six wee-wees, all of the PWWDIB variety. 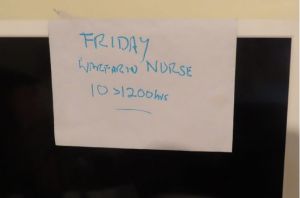 I belatedly noticed the sign I’d left on the modern, up to date, tiny screened TV screen. It was for me to know that the phlebotomy nurse would be calling today, between 10:00>12:00hrs.

So I set about getting ablutions done. Then sorted the black bags out.

Graphics were worked on in CorelDraw, for several hours. It was a slow business, with the hands and fingers dancing and jumping. 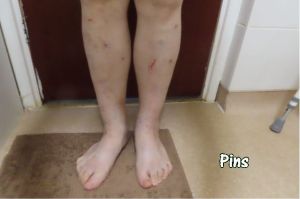 I got the ablutions seen to. Again, the dropsies were many, but at least different today. Amongst them, was the sock-glide (2), the PPs, radio, and the shower chair! Some luck with the radio, it nearly bounced into the toilet bowl!

Only the legs knees RAI was any bother this morning.

I got dressed and returned to the slow, slow job of making up the graphics. Got the black bags made up. The phlebotomy nurse arrived while I was dealing with the waste. So lovely to see her again. Oddly, as with having the flu-jab, I felt nothing at all when the needle went in? The peripheral neuralgia in the arm seems to be getting worse, or is that better? Hehe! 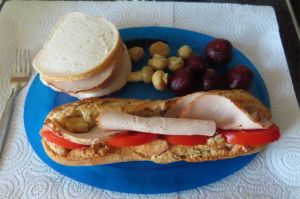 I got an early nosh sorted-out.

The only cooking involved was heating up the Sourdough baguette. I couldn’t eat it all but managed about 90% of it. Flavour rating: 8.5/10!

Then, while eating it up, Reflux Roger and the tight chest, began to belch and cough, and didn’t stop for ages! Uncomfortable, to say the least! 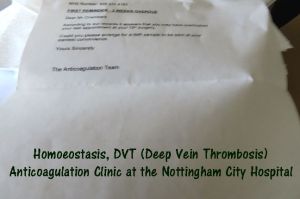 A letter arrived, from the Haemostasis, TV (Thread Vein) and DVT (Deep Vein Thrombosis) Clinic at the Nottingham City Hospital. They wanted to know the reason for my not sending in any blood for testing over the last two weeks!

The was a help-line to ring. Mon to Thurs 10:00 > 14:00hrs, Fri 10:00 > 13:00hrs. So, I decided to do an Obersturmbannführeress, cat-walk model Warden search. To try and find someone, well, beg one of them to call the number for me. Often on the phone in the past, I’ve misheard things, and made myself look a right fool, getting thing wrong! So I could explain about the Sherringham Park surgery and their unilateral decision to stop taking my blood for three-weeks, without even telling me about it! My visit after the falls, and the nurse calling today to take a sample. It had to be done sharpishly, as there was little time left to get the call in on time.

So, I set off taking the black bags to the chute and recycling one to the bin, en route.

I arrived at the Generalfeldmarschall Warden’s holding cells, but it was empty. Missed them! They will be out and about somewhere doing their duties, can’t be helped. I’ll try again on Monday.

Back to the apartment. Medications were taken, and what bit of spirit and determination I had minutes ago, suddenly malfunctioned. Reflux Roger and Tight Chest Charlie both moved up a gear, and the hands and fingers were of no use for typing!

I gave up on any idea of getting any graphicalisationing done and depressingly plopped myself in the £300, second-hand recliner, in the hope of getting some sleep and peace-of-mind.

Neither came easily. Brain-attacking fears, worries, concerns and hatreds, haunted me for hours! The belching and sharp intake and outtakes of breath didn’t help.

Nor did my ever more believable thoughts that I might be off my rocker, out of my mind, meshuga, nutty as a fruitcake, schizoid, or just stark staring mad? I need help! Hehe!

4 thoughts on “Inchcock – Friday 20th September 2019: Today convinced me that I was away with the fairies, and ready to start foaming at the mouth!”