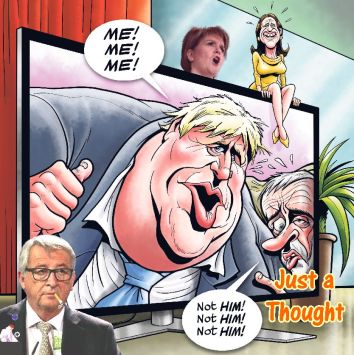 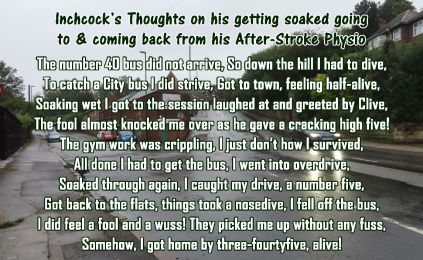 Huh! 22:20hrs: I regained semi-consciousness, but almost immediately lost interest in doing so. Why? I’ll tell you; well, I’ll do my best to explain why I think this is. Bear with me please, if I get confused, ill-defined or incomprehensibly-garbled in my efforts. I know the things I want to write, but by the time the failing neurotransmitters allows me to, I’ve often forgotten what I had planned to say.

Like a few minutes ago, I had to get up to use the wee-wee bucket, this took a while, because Arthur Itis is not happy with me this morning, and every step or move of the leg or knees is a struggle. He’s never been this bad before. Naughty Arthur! I passed the INHBT (I-needn’t-have-bothered-trickling) wee-wee and got to the notepad to put down my waking thoughts, there was nothing there! Dribs and drabs returned, and I added them to the pad as and when. Hours and hours later, I’d got the Inchcock Today done, and referred to the notes, which were partly unreadable, and used them to write this explanation. (Have I lost you yet?) Here goes:

Back-to-the-current time: The mind was blankish, yet confused and almost antithetic to it’s usually being scrambled hassled by a flurry of worries, fears and concerns, as is the

normal awakening condition for me. There was a lack of interest in things an indifference, unconcernedness, that really is not me at all. Slowly, guilt took over as the head-agonising factor! This remorsefulness was adorned with contrition, misgivings, doubts, qualms, sorrow, nae, self-pity! Yes, these were faults: Guilt and Self-pity. Why is it a good question? I haven’t worked it out yet. But the EQ was not around, no feelings or emotions to help me clarify the causes. Although a vague ‘You’ll just have to cope’ message was received later in the day.

At least the constant droning and humming noises were not bothering me too much, as they would normally do.

Eventually, after being stood, leaning on the four-pronged walking stick, for I don’t know how long, musing, I went to take the morning medications and sort the prescriptions. 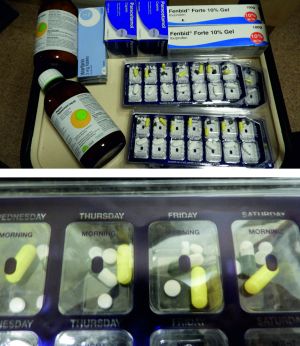 The Carrington Chemist who the Medicines management lady Leoni had phoned on Wednesday morning to arrange for the Furesomide water tablets to be delivered in packets, not the bubble-blisters, has not done so! They are in the blister packs. I took a photo of them, to show how alike the tablets are, Codeine 30g, Furesomide and the Bisoprolol Beta-blockers. I have the hardest job in picking which one is the water tablet, to throw away when not needed. I reckon on a few occasions, mainly on bad pain, or shake hand mornings, I’ve dished the wrong pill, and missed either a painkiller or beta-blocker! This is not good! And only served to make me feel even worse than when I woke-up! Crabs and Grobblecraps! In fact, Grumble, Sodit & Blast, as well! I just threw the medicines onto any draw, willy-nilly

Feeling even less like interested in life, I automatically moved the handwashing onto the airer! Not even taking any care about arranging them into an optimally folded position. And not fussed about it either. This could be a miserable day.

Then I took the morning medications and made a brew of Thompsons tea. But it might as well have been a mug of the crap weak cheaper PG tips for all the interest I showed in drinking it. The tea went cold, as started updating the Inchcock Today. Which has never taken longer to get done before? The Peripheral Neuralgia was giving me a bad time now! No actual dangerous shakes of the leg, but as earlier, there were the occasional mini-trembling moments, involuntary muscle-twitching and cramping – which are usually a sign that the leg is about to go into an imitation, spontaneous, kick-out and a neuropathic drop-something and flail-about dance routine. If it had done, it could have had me off the chair onto the floor. Fear more anything pissed me off. But no, bother from the leg. The hands and fingers were a different kettle-of-fish! The finger-ends were going all over the place, when they contacted a hard surface, like the keyboard!

The nerves were just not telling the brain! Just coming to the finishing off of the blog. Many hours later (Huh!) and the right hand and digits did a scoot across the keyboard and knocked it off the counter! I retrieved it, and the direction arrows on the keyboard would not work at all in WordPress! I wondered what the heck I had done to it. I searched for assistance on the web turned, without any luck. So I turned everything off and rebooted. Tried again, but it was not having it! So I opened and cleaned the inside of the board, as best I could, with the fear of dropping it again hovering over me. Got it reassembled, but no luck! I was convinced whatever I had broke or altered during my fumbling one and a half-handed to stop it falling but failing, then the farce of picking it again… I’ve lost what I was saying now! Oh, yes (just read it), had put the arrows out of action for good, and near depression dawned. One last everything off again, left it a few minutes then started up, the web came on, and I went on WordPress… and the arrow keys were now working!?!?!? Is it me? Is it the Mysteries of my beloved Woodthorpe Court. That lies somewhere between the twilight zone and a wormhole slipping through a tear in the fabric of space & the universal continuum, illusion, delusion, & hallucination! Or am I going sillier, more-hare-brained, weirder, losing it altogether?

I got some pictures off to Pinterest. Went on TFZer Facebooking. Then had a perusal of the WordPress Reader.

Well, despite everything, I must get some graphics done in advance ready to do the WP templates. No matter how rough and full of angst, I feel. (I didn’t sound too sure of myself typing this! Hehehe!)

I made a mug of tea first and took photographs of the moon above. I took then in Night Panor… no, it wasn’t; it was in Aperture Priority. Not bad results considering. The clouds were ever moving, hiding the moon, so back inside.

I brought the tea to the computer and pulled the curtains open on the balcony. And the mon was out again, I got the camera and back to the kitchen, banged my elbow opening the unloved, unwanted, light & view-blocking, impossible to get to for cleaning, new window. And the clouds covered the moon again. I waited while but the clouds seemed to be spreading thicker now. So back to the computer…

X3: I stubbed my *toe on the airer, *knocked the clothes off of it, dropped the mug of tea and swore silently swore! Getting down to retrieve the shirt and socks was done with less pain than usual – I used the picker-upper stick! Haha! I was getting ready to adopt a smug mode, and the *picker-upper fell to pieces in my had, the rivets had somehow come out. And *I dropped the handwashing back onto the floor, just where I’d picked it up from. No wonder my EQ indicated that I’d just have to up with things today! So, I did not get too angry-noyed, just a little. Humph! Again, with a lot more inconvenience and pain, I carefully got the washing back on the now, bent-a-little-more airer.

I got on, slowly, laboriously and with oddly painful knees, well, one poorly knee. That was from a combination of the mini-trembles, the toe-stubbing and the bending down I imagine. With the composing of this blog. Which a few hours later, I’d got as far as here!

And went to make a brew, that might get drunk this time! As I was making my way to the kitchen, I put the camera in my pocket. While the kettle was boiling, I took four snaps of scenery from the deadly, nasty, light and view-blocking kitchen window.

No Accifauxpas or WHoopsiedangleplops encountered while making the brew! And back to the computer. Swank-Mode-Adopted!

It didn’t last long, when I got to the computer, I realised I had left the SD card in the slot! So, back to the kitchen and retook the scenic shots! Ay-yay-yay!

At last, I got around to creating some header graphics! But I was so tired now, I’d been up for thirteen-hours already. I just did a few of them on CorelDraw. 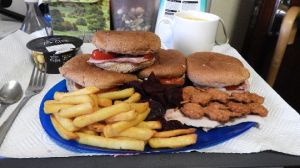 Done in now, shattered, I’ve had my chips, well I haven’t, but I made the meal and had some. Dagwood cobs, beetroot and chips etc. sounds good to me. But it was not to be eaten.

What I did eat of it, I enjoyed, but the tummy churned and my appetite dwindled? Mmm?

I went to wash the pots and the evening’s darkening skies prompted me back into a photographicalisationing frenzy. The first photo was in Aperture Priority, the second in Night Landscape mode. I tried to take the same area in each.

I was so tired now but fought off the weariness and mental-fatigue, when I noticed the house that had been being modernised for months, extensions, new roof etc. appeared to be occupied again. Seasonal lights adorned the front of the house and bushes.

I took the medications, and got settled down early in the £300, second-hand, near-dilapidated, gungy-beige coloured, c1968, sometimes working, uncomfortable, rickety, rinky-dinked, rattling, rusty, resurrected, reconditioned, recalcitrant, recidivating and rotting-away recliner. That’s the one that the horribly good-looking, handsome, taller, fitter, richer-than-me xyrophobia-suffering Brother-in-Law Pete damaged, while he was flat-sitting when I was in the Stroke Ward. And he fitted new CCTC cameras, he erected a drone-landing platform outside and searched for my valuables, which he found and took, (I still haven’t got them back yet six-months later).

I discovered the Death on the Tyne film was being shown. I’ve not seen this one, but I so enjoyed the Murder on the Blackpool Express, made by the same company with almost the same actors in it. I couldn’t remember the title so looked it up, to find this photograph advertising it’s being shown on the Gold channel on the 15th. 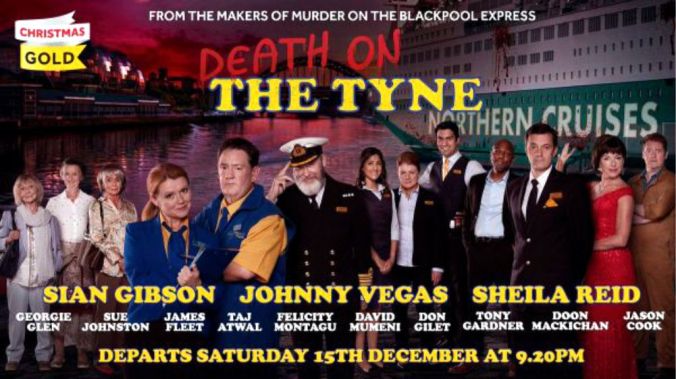 Needless to say, the first set of commercials came on, I drifted off, to sleep! Waking well after it had finished, and felt even more angry with myself, for thinking I could watch it again on the 15th and realised I do not have the Gold channel on my TV. Shame!

Letting myself drift off back into the land of nod, and the Brain-Storming thoughts, fears, worries and self-hatred flooded into the grey-cell box. Agitating and stirring up failures, mistakes and terrible decisions made by yours truly!

I do wish they wouldn’t do that!