01:15hrs: I woke up to the wind, rain and the pestiferous, infesting everywhere ‘Hum’, that was the loudest its ever been! Grrr! I escaped the clutches of the uncomfortable, £300, second-hand, c1968 recliner with ease! No Arthur Itis grumbling this morning, he’s giving me a breather I think. But, once I was up on the pins, walking stick in hand and on my way to the kitchen, Saccades-Sandra and Back-Pain-Brenda joined in with Toothache Terrie, and my spirits sank back down a tad.

I got the kettle on and needed a wee-wee. It was of the SSPP (Short-Sharp-Painful-Powerful) mode, so I kept the GPWWB (Grey-Plastic-Wee-Wee-Bucket) handily near the computer chair, my EQ told me it would be needed frequently! Took the medications and made a brew of Glenghettie tea, then straight on the computer.

I had to create some graphics first on CorelDraw. This took a while, but at least Neurotransmitters-Nicodemus was a lot easier this morning. Then I got on with updating the Saturday post, it was not a good day. The rain came, and the light resisted coming out. The wee-wees that were for some reason tenacious were all of the same style, SSPP (Short-Sharp-Painful-Powerful). The toothache was not too bad after I’d taken the medications.

Eventually, I got the post finished and sent off to WordPress. Then a few pictures to Pinterest. Then onto Facebooking, which, with me not getting any done yesterday, cost me a few hours.

I did a couple of graphics, then had a bash at the WordPress Reader section.

I made a start on Josie’s plate layout while her potatoes, cheese, butter and onion salt, and peas were laying ready to be mashed and served up.

Ablutions time. I don’t want to look scruffy when I take Josie her Sunday lunch. I’ve not seen her this week, I’ve called at her apartment a few times.

I took the new long socks in with me, the get on after the teggies, shaving, showering and medicationalisationing etc. I just hope they will be comfortable and long enough.

A few, as-to-be-expected dropsies. The only bad one was after the session when I was leaving the flannels in the sink to soak in disinfectant and liquid soap flakes; I dropped the bottle! A bit of cleaning up needed. The sock-glide battle was a draw.

The pins (legs) looked to have more colour. But it was most likely due to my having the wall convector heater on. Feeling a touch more vibrant and smelling nice, I made a start on creating Josie’s meal. Well, vibrant was not the word, erm, err… perhaps, Feeling not so bad, is a more accurate way of saying it. That was until I tackled the sock-glide, although no injuries or

knocks were suffered, I discovered that the new ‘long socks’ were not so long after all! Ah, well, my own fault for buying the wrong ones! Pillock!

I got everything meal-wise prepared and was about to get on the computer to do some graphics, and I realised the handwashing still needed doing! I changed direction to go back to the kitchen, lost control of the stick, and bounced into the door frame! If I remember correctly, I think I said out loud, something like; “Well, fancy that!” The bad thing about it, was, that I caught my chin on the frame, and now the blasted toothache is really giving me some stick!

I then got the handwashing done, rung and hung. A more challenging job today, t-shirt, the weighty jammie bottoms, socks and the thin dressing gown.

I pondered a while, should I take yet another pain killer to ease the tooth? Hope the Dentist can fit me in tomorrow, and also, that he

doesn’t (but he will) charge me for the appointment I missed!

Went to check on the cooking for my meal, and it was like someone had turned off the light! The rain was coming, on and off. By the time I’d checked the fishcakes and cheesy potatoes, it was light again. Storm Dennis? Phwert!

I got Josie’s dinner ready and served it at her door. She was in good form today, bless her.♥

Then I got my cheesy potatoes in the oven to crisp-up and did some computer catch up. Then I tended to the meal, still wondering if I dare take another painkiller. I resisted it.

I moved the dressing gown and hung it in the wet room, but the wall heater on, with the intentions of turning it of in a couple of hours. (In reality, I found it ten hours later, when I went in for a Porcelain Throne session, on Monday morning! – the dressing gown was dried! Oofta!)

I got the herring in sweet onion and pepper sauce left-over from Josie’s plate, and I sliced a black Ibera tomato. Kept checking on the fishcakes and cheesy mashed potatoes in the oven.

Got a Rumpole of the Bailey DVD in the player, ready to watch after the fodder-intaking. 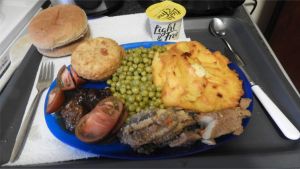 What a feast of a meal today! Cheesy mash, baked in the oven to crisp up. Garden peas (not so good, from Lidl). Herring in sweet onion and pepper dressing, black tomatoes, battered fish cakes. Onion relish, and two wholemeal cobs. A light lemon yoghourt for afters. Taste-Rating of 7.5/10.

But, I paid for this treat, with a load of washing up to do, from both meals. I cut my finger on the tomato slicer. Dropped and broke the tea-bag pot! Spilt the water on the floor when emptying the bowl. Sad, innit?

Got settled early to watch the Rumpole on the DVD. Fell asleep after a few minutes, and wondered what the noise was, surely the ‘Hum’ can’t be this loud!

I got up, fell over, thanks to Arthur Itis’s sudden attack in both knees, got myself back up with the aid of the four-pronged stick and the Ottoman for leverage, and went to the kitchen to have a look around to investigate this odd, loud noise. It was the rain pelting down, and wind galing around the flats!

I returned to the recliner, restarted the DVD from the beginning, and fell asleep again. A couple of hours later, I woke up again, with a start! As I considered getting up back for another poke around to see what might have shaken me from my reverie… but decided not to bother, and promptly nodded-off again! Zzzz!