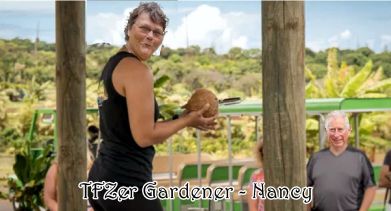 014:20hrs: I lay there in the £300, dilapidated, second-hand, c1968, gut-wrenchingly horrible beige coloured, not working, rickety recliner. I stayed there for a while, uninterested in anything practical, in an unconventional, incredibly optimistic frame of mind, almost contended.

I spent a few minutes putting the world to rights… I solved the Coronavirus problem, brought about world peace. Then I legislated a few new laws; Life imprisonment for Pavement Cyclists, brought back corporal punishment for paedophiles, freed all prisoners, bar the violent ones, on the promise of their being hung drawn and quartered if they offended again. Solved the global climate problems, and gave medals and an increase in pay for all the NHS staff.  Volunteer helpers were given free air travel for two years…

04:40hrs: Then I woke up. In need of a wee-wee and the Porcelain Throne. I grabbed the stick, caught my balance, and poddled off to the wet room. Where the wee-wee, for a change, came first. It was of the ELPJL (Extra-Long-Powerful-Jet-Like) fashion. Yet, it was painless! The evacuation can be described as meat-ball-like (Sorry, but it’s true).

I spotted some marks on the arm, Clopidogrel Clive inspired, or maybe Myasthenia Gravis Mavis? I rubbed some of the antiseptic creams into the area, and I felt a bit of a tender area on the other side, so 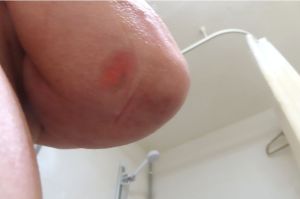 investigated. I think this might have been my leaning against something in the hours spent and failing to get to sleep last night. Hey-ho!

I was now cheering up, mostly prompted by the helpful folks being such a boon to me this week. So inspirational, despite my recent adoption of a Grumbly-old-man mode. Tsk!

I so appreciate this food parcel, if it comes each week. I can forget all the worrying and hassle over trying to get a food order slot, in the knowledge that things will be alright. A blessed relieve that! Thank you Nottingham City Council and Homes. ♥

I made my way to the kitchen, feeling industrious and ready for the challenges of the day (I may regret saying that. Hehehe!) I spotted the shirt I’d left in the bowl to soak, and went to get the washing done, wrung and hung before even putting the kettle on. (Mmm?)

I caught the tops of the toes on my right foot underneath the cabinet door. Bending some of the overgrown nails backwards. Argh! I managed to keep down my coprolalia response to a low volume.

Well, that ensured I was in an alert and awake state now. Haha!

I got the washing finished and hung.

Then got the kettle on, and tried taking a different sized photo on the Panasonic camera, from the thick-framed, unwanted, disliked,

Getting the camera setting back to the original setting was a farce, as I couldn’t remember which one it was on! Eventually. I tried the 4-3 ratio. We’ll see later if it was right. What a memory I have!

I got on the computer and remembered to make an order for an electric can opener from Amazon. Not cheap, but I hope that RAI (Rheumatoid Arthur Itis and Nicodemus’s dying nerve-ends) can cope using with it. I’ve not been able to use a can opener for yonks now, and have to use the ring-pull ones. Of course, with having to use delivered food now, there is no way I can tell if what I buy has ring-pull or not. The kindly donated food parcel delivered, had no pulls on any of the tins, so if it is usable for me when it arrives, at least I can use the peas, beans, soups etc. that I have amassed since the lock-down. Fingers crossed!

I made up a template for this blog and started writing it. Then it dawned on me, I had not yet finalised Tuesday Diary! What a feebleminded, lunkheaded, glaikit I really am! Hey-ho! So, I started to update the post, at last!

Huh! Foolish me, thinking I was going some diary work done! I really should have known better than even try to! It’s madness! The landline sprang to life. It was Sister Jane & Pete, worried because the blog link had not been sent to them. I was ruining their morning coffee session when they usually read it. Hahaha! The conversation was enjoyable but challenging to understand all of it, as Jane spoke to Pete in between, and I was getting confused, not knowing who she was talking to. Anyway, Jane told me I should buy a microwave. I mentioned I haven’t got the room. She told me to make it! Haha! We managed a few laughs between us, and I ended up enjoying the natter. But it cost me an awful lot of time, and I was already three hours behind the usual posting time, and I had not yet got the blog updated.

I was accompanied by the odd clang, bang and tapping noises from above. At least I know that Herbert is alright. Ferreting away at his model-making. Poor thing, he must be missing his jig-saw puzzling now the social-area has been closed down for the duration on the pandemic. He loved doing them, too.

I made brew, and decided nothing was going to stop[ me getting the updating done this time!

♫ I only want to be with you ♫, chimed out from the doorbells. I got up and put some pants and a shirt on. It was only another food parcel! This time from the Government. And a good one it was, too!

The both-sided A4 letter said it would be weekly. So, I thought I would phone later, to cancel the Nottingham City Council parcel, and thank them for their efforts.

I got the things stored away, and made up two black bags and took them to the waste chute. (Arthur Itis and the toes were being a bit bothersome… well, damn painful! But I was in a grateful mood towards the volunteer’s efforts for the gift.

Back to the flat, and called Trapeze artist and lap-top dancer, ILC Warden Deana, to cancel the food from Nottingham City Homes. But the message said she is not available at the moment.

I thought I’d better get an order in; if I can see one suitable for an electric can-opener on Amazon. Hoping I can then use the tinned goods without ring-pull tabs on them. After much kerfuffling about, indecision and pusillanimity, I opted for this one.

I’m not sure or confident if I’ll manage to cope using it. Janet tells me it is easy. But with the Colin Cramps, Rheumatoid Arthur Itis, Nicodemus’s unreliable neurotransmitters, Dizzy Dennis, Shaking Shaun and Neuropathic Nigel to cope with, people can’t understand or believe the difficulties I have in doing everyday things. Even I can’t at times. Hahaha!

Great balls of fire! I got carried away and out of kilt there! I’ve still not updated the Tuesday post! What a lamentably pathetic, neglectable, nitwit I am! I’ll do it now!

For crying out loud! The landline lit and rang forth again! It was the Cardiac Unit, calling for someone of another name? I had to go all through my personal details to convince them I was me! The caller asked for someone with the surname Chamberlain, I think it was. Ah, well, it was reassuring that others can get things wrong as well!

I tried to get the updating done, seven hours later than usual. Botherations and blasticulisations! Ah, well, I’ll get on with…

Well, that cost me a couple of hours or more. With the link sent off, the WordPress Reading, then TFZer Facebooking I’d used up a total of four more hours of the day!

I rang Jane, to make sure she’s received the link to the post. I found out I was not to order any more food. Still got to buy a microwave, and must cut down on doing things to give me more time for the blog. Thanks, Jane. Humph!

At long last, I got back on CorelDrawing. Well, I managed to get two done. better than none.

Got the nosh started. Lamb burgers, boiled spuds, tomatoes, sugar snap peas, and all prepared and served up.

A splash of Hoisin sauce on the halved spuds. All acceptable. The lamb burgers made a nice change, but they were not as good as the beefburgers. Flavour rating: 7.5/10.

Did the washing up, moved the handwashing, and got settled, determined to get some good sleep in if I could.