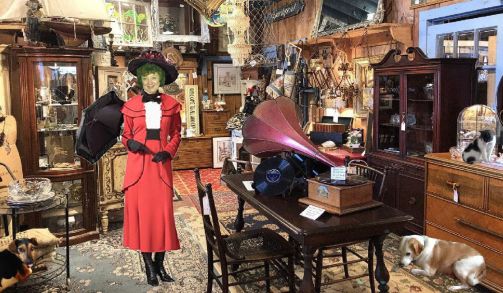 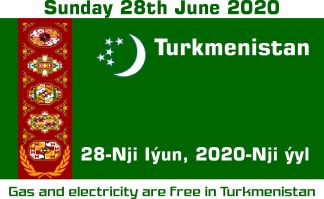 03:30hrs: After waking and nodding off again several times, I forced myself to activate the brain and limbs (I needed a wee-wee!), and rose from the depths of the slowly disintegrating, £300, second-hand c1968 recliner.

The stomach where the tea spilt onto last night, was tender, the feet agony the moment I got my weight on them.

Off to the wet room, for the most sprinkling and spraying release ever! I had a job to see that much of it had reached the porcelain at all. But, on the bright side, it made me clean the WC tank, seat, floor cabinets, the floor itself and the handwashing sink. Also, various parts of my body. Christened this one a VSWAO (Viciously-Spraying-Wildy-All-Over) wee. You’d be surprised at how much had sprinkled on the arms and upper torso, too, I was! 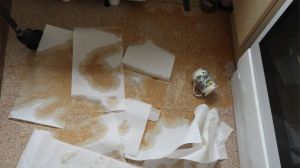 Took the medications, and remembering yesterdays nightmare Accifauxpa, I very carefully, nervously made a brew of Glengettie Gold tea. I managed it without any further dropsies, scolding of my body parts, or injury! Phew! 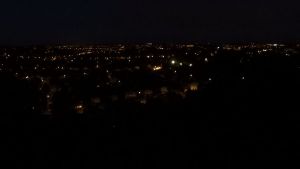 Waiting for it to brew, I took a shot of the morning view. Then, imbibed the morning medications, and back to the wet room for another wee-wee. Which was of the same VSWAO mode as the first one was!

I got the Health Checks done. The SYS had come down at last. The earhole temperature of 64°f seemed fine enough.

Then I got Computer-Cameron going, and did a graphic first, then on to updating the I Saturday post. About three hours later, I’d got it finished. Then I emailed the Link. Went on the WordPress Reader. Then Facebooking. Shoulder-Shuddering-Shirley was in a good mood with me!

Still no need of the Porcelain Throne heavy-duty usage needed, yet? Off I trudged limpingly (Oh, the toes!) to get the ablutions tackled. 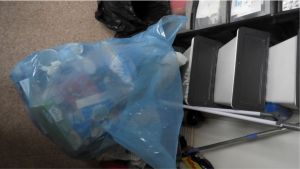 I sorted out the waste bags. Five small bags were taken to the waste chute, and the gigantic blue recycling bag had some stuff added to it. Far too big for the minuscule opening in the chute, so I can take it down to the caretaker’s room in the morning.

Back to the apartment, and a message came in from Iceland. Another round of my getting addled and disconcerted, dementia or memory loss, call it what you will. But I was convinced I’d ordered it for next Monday? Anyway, it was due to arrive in a few minutes! Sad, innit?

Minutes later, the intercom rang but then stopped after a few seconds. Now I was confused. If I got down to have a look, I might miss whoever it was of they rang back. It turned out to be the Iceland delivery driver. The chap said he had other deliveries in the block, so rang each one to let them know he was here.

He put the good through in the hall for me, I slipped him a can of G&T, then got the bags into the kitchen to sort through them.

I made a mug of Thompsons Punjana to drink while getting the things away. 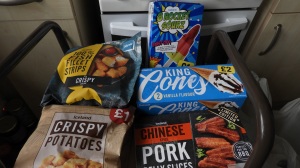 I started off with the frozen stuff. Far too much to fir in the freezer! So I did mean to order these for next week? Sadly, some throwing out of food was needed to get the new stuff fitted in. By the time I’d done it, there was another bag ready to go to the waste chute!

Then, on to the fridge and fresh food bags. Mushrooms, orange juice, pork shoulder steaks. Some of what I am sure will be uneatable Morrocan tomatoes, the last lot were. The mushrooms, well-covered in nutrient-rich compost! The wholemeal rolls, crushed flat, as only Iceland know how to

I just cannot remember ordering all this lot? Blimey, if the dates are long enough, I’ll still have to hand some out, so many! Cheddar biscuits as well? Oh, and a Raspberry and cream swiss roll. (That could have been ordered, a vague memory guiltily lingers!)

Made a start on this blog for a couple of hours, then got Josie’s meal prepared and delivered. Cheesy potatoes, tomatoes, gherkins, silverskin onions, Surimi-sticks, smoked haddock, peas and beetroot. Delivered it Josie’s door. And then got some belly pork in the oven to slow-cook, coated in hoisin sauce, for my feast. Started on the computer again.

Saccades Sandra and Dizzy Dennis paid me an extended visit. I had to give up on doing the computing.

Concentrated on making the nosh… carefully, not taking any risks.

A fairish plateful, considering how Dizzy Dennis and Shirley were giving my so much bother. A score of 7.5/10

The early-weariness joined in. I got the pots washed and took the evening medications, but that was all.

I got down in the recliner and the TV on, and nodding-offs soon started. None of them lasted for longer than five minutes. Amazingly timed for me to miss and exciting bit of whatever I was watching! 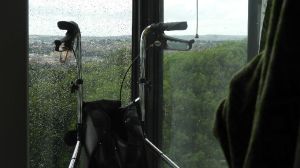 But for any proper sleep, my Sweet Morpheous, I had to wait for hours!

I gave-up on the TV and laid looking lazily and lackadaisically at the rain coming down the balcony windows and in through the cracks to soak the running board.

The wee-wee trips were frequent, but each time they would have struggled to fill a tea-cup! They were getting less and less. Still, I got up and down each event without any further injuries.

Eventually, I went to make a brew of Glengettie tea, and the dying sun put in a surprise visit.

With Sweet Morpheous still refusing my requests, I put the TV back on. And was pleased to find a documentary on Freeview channel 66. I really got into it as well… During the second set of adverts, Zzzz!

4 thoughts on “Inchcockski – Sunday 28th June 2020: A mansuetude lingered amidst the mayhem, today!”