03:00hrs: I’d had about six hours kip! But, somewhat unfortunately broken for many wee-wees of the RPD (Reluctant-Painful-Dribbling) variety, of a cloudy grey colour. But no complaints about this, for I felt a little livelier this Wednesday morning. That is of the mind, not physically, for Saccades, Sandra woke at the same time as I did. Psychologically, I was frisky, but with a mental unclarity, with certain inveterate stupefactions lingering in the background? Uncertainties, lack of confidence and unrecognisable fears.

But, I certainly appreciated getting some Sweet Morpheus in. Albeit, with some vertiginousness of mind, and a lingering unexplained nervousness and apprehension. Why? That is the question that needs an answer. Preferably with kyriolexy, and not some obscure dug-out, with vague logicality’s in the explanation, that encourages only further confusions and worries. I waffled on there a bit, sorry!

I extracted my humungous heavily-bellied body from the recliner, caught my balance, and woggled off, stick in hand, to the wet room for another wee-wee. The same mode again, and taking this, the need for the Porcelain Throne to be sat on arrived.

One of the more excruciating sessions this one! Not messy, Karki in colour. Massive, and a bit bloody. All finished in record time, though. Which is probably why it stung so much.

The pins and plates looked a little battered and bruised. But they weren’t hurting any more than usual? The pins looked like they had lost a bit of weight? The knees have not looked so good in a long time, is Arthur Itis on holiday? Hahaha! The veins seemed to be making their minds up whether to surface or not today?

I got freshened up and a new pair of PPs on, and with no injuries as well!

I did take a moment to outstare the Sock-Glide before I left the wet room. If he had eyes, they would have been glaring at me, threateningly! Desperate to draw blood and bruise me, supply my fingers with more black welts again! He must be in a right bad mood now! With the toes uncut for so long, it’s been months since I’ve been able to wear socks or shoes, it’s just too painful.

I’m dreading the Podiatrist opening, firstly the agony of having the nails cut, the ulcer bled and the corns trimmed! But mostly, the fear of having to use the sock-glide again! I still have scars from my last battle with the dreaded Sock-Glide in April. I’m wandering off-course again here! A moment of insanity mayhaps, sorry about that!

Off to the kitchen, where the twinkling lights of Nottingham greeted me through the unwanted, light & view-blocking windows. I got the kettle on and opened one of them to take these photos, and the wind was nippy as it blew in. I took the first shot in Auto mode, the second in the Night Landscape mode.

I got a mug of Glengettie Gold tea poured out, and the need for a wee-wee returned, so, off to the wet room. And what a change in style this release was! A PLAVC (Long-Painful-And-Various-Coloured) mode. I swear it changed colour half-way through, from a cloudy grey to an even more cloudy orange? 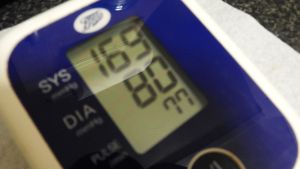 The health checks were done. The Sys and Dia were a bit higher this time, the ear temp showed as ‘Low’.

I got on the computer and started to update the Tuesday post. Saccades Sandra and Dizzy Dennis bothered me a bit. But fantastically, Nocodemus’s Neurotransmitters and Shoulder-Shuddering -Shirley were both being kind to me. Confusionalising me!

With determination, I got the updating finished, but Saccades Sandra mainly, caused it to be a three-hour-plus job! I had to keep stopping to wait for the vision focusing to return. Three wee-wees were needed during this session. All three of them were of the PASL (Powerful-Apricot-Short-Lived) variety. But it makes wee-weeing a bit more interesting, not knowing what colour or how powerful things will be!

When they lasered the Cancer in the bladder, I recall the Doctor telling me that this change of colouration may initially be active. Hehehe! That was in 1982, and it’s just started!)

I went to make a brew of Thompsons Punjana tea and nibbled some seedless grapes while the kettle boiled. When I realised I had eaten such a lot of grapes, it dawned on me, I had not turned the kettle on. So I did!

I took a shot from the light and view-blocking, unliked kitchen window, to the left, and then right.

As I made the tea, I had to hobble off for another wee-wee. This time it was a rare, SFRTFC (Strong-Forceful-Reluctant-To-Finish-Cloudy) one, back to deep orange in colour. Still, it kept the interest going. What will the next one be like, I thought, TTPOT, (Thrusting Tyrian Purple Trickling mode?) Hahaha!

The ♫ I only want to be with you ♫ tune rang out from the doorbells. It was Jenny who’s left a bag of stuff for me outside. Lemon mousse and yoghourt, bless her cotton socks. She’d even given me som foil oven trays after reading yesterdays blog ♥! I rang her to thank her. An angel within my midst!

I got the potatoes from the slow cooker into the saucepan. Added some beef granules and balsamic vinegar into the remaining crock-pot liquid, and got the pod peas out to shell them. And what a tale to tell!

I opened the bag of Morrison’s 454g bag of peas, they had a 4th July sell-by date on them. Most of the big bag went straight in the waste bin as I sorted them out to find some that were at least pretend-fresh! I noticed a few that I started to open had worms and or insects in the pod. So I double-checked every one that I podded. I also looked in the water in the saucepan I’d dropped the earlier peas into, for any sneaked in insects floating or swimming in the liquid!

Part of the way through an insect crawled out on my finger. I began to investigate what it might be, it didn’t look like it had wings, but it bit my finger and flew away as I was about to photograph it!

Well, I never! I wonder if there are any entomologist (I’ll just check I’ve got the right word on Google – yes, okay), living in the blocks of flats? Hehehe!

The peas that got in the saucepan were few and far between, especially for the £1.50 they cost. I added a lot of demerara sugar to the pan and checked on the Pork Shoulder I’d put in the slow-cooker with the gravy.

I eventually made a brew, and then went on Facebooking on the TFZer and Winwood Heights pages. Had to stop, flashing picture been put up. Saccades-Sandra kicked of big-time. I couldn’t even comment on here for hours. Focusing and vision terrible. I may have to stop going on Facebook, even if I do enjoy it so much. I do not want to go through this again.

I went to get the ablutions done. But couldn’t see to shave or shower safely. Couldn’t do any art creation work either.

Struggled to get the nosh prepared. And part-way through doing so, Saccades Sandra dissipated, and boy was I glad she did! As quick as she came on.

This, I think, helped me enjoy the meal so much more. A had a bit of success with this one—worth all the faffing about and time it took to get it made. The pork Shoulder steaks were tasty, well, everything was, really. I put some butter on them and the potatoes. The Jenny-supplied lemon mousse went down smoothly afterwards, with some home-made spring water, mixed with a drop of orange cordial. Flavour Rating: 8.7/10!

This nosh and the getting free of Saccades vision problems were a double-treat!

However, the edge was taken from the sensation when I went to wash the pots! ‘Ich war a wenig ahntoisht’, when I dropped the plastic washing-up liquid bottle, and it broke as it hit my foot then the floor! Not really annoyed, but pee’d off a smidge. I got it cleaned up, I now have a clean patch of floor, surrounded by tiles that still need cleaning. Hehe!

I got settled down again eventually, and there were three on-the-trot episodes of Law & Order showing on channel 21, ‘5-USA’. I planned to stay down in the chair and enjoy them. So, I got the medications taken good and early, in case I forgot later. Then began the viewing.

I got the legs and feet up on the swivel chair. I would have used the £300, second-hand, c1968, recliner, but of course, this no longer works, after Brother-in-Law Pete broke it playing with the controls when I was in hospital as he stole my valuables while flat sitting. Hehehe!

What a farce! I kept nodding-off for a few minutes, missing or losing the plot of the story-line, for hours. Waste of time watching it!

However, after getting up for a wee-wee and resettling in the chair – Heaven! I fell asleep, and without any wee-wee interruptions, kipped for five hours straight! Fantastisch!