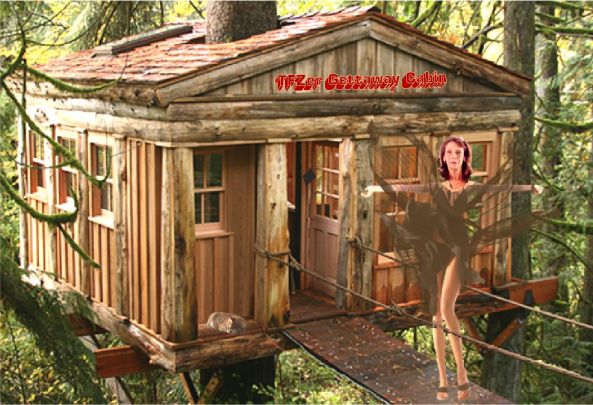 Cool TFZer, at the Tree-Top Cool-It-Cabin 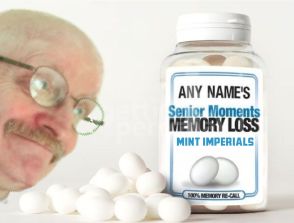 03:00hrs: I’d given up all hope of any sleep. I felt full of worries, apprehensiveness, and in a state of fearful confusion. The past few days have been a challenge, a fight, a struggle.

Now here I was, ashamed of how I’d handled, or instead coped, with the persistent ongoing, never-ending problems of recent days. Not so long ago, these Whoopsies and Accifauxpas would not have got me down in the manner they do nowadays. I approached my dilemma from another angle. Desperate to find a way of coping betterer. I had a chat with myself; “It’s not long before the end is nigh for you, so why fret over things, Inchy?” That’s as far as I got with the self-discussion, as a desperately urgent need for a wee-wee arrived!

Ever since I got up, the wee-weeing had been frequent, and every one of them was of the SSP (Short-Sharp-Painless) style and, free of any PMAD’s Pre Micturition Dribble, and Post-Micturition After Dribble. I’ll try not to mention them too often unless there are any changes in their style or mode. 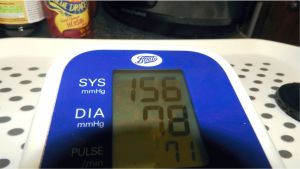 I went to do the Health Checks, take the medications, and make a brew of Glengettie tea. The BP readings were up a tad, and the thermometer, that has miraculously started working again read 37.3°c. The tablets were taken, and I took the tea to the computer with me.

I pressed on with the updating of yesterday’s post, got it finished, and posted off to WordPress. Went on the Reader section. Then Pinterested some photos. Made another brew of Thompsons Punjabi tea. I could hear creaking noises all around, very strange, I couldn’t fathom what was causing them. The ‘Hum’ seemed weaker this morning. I’d sooner have the Hum than these worrying scrunching noises!

Then the computer mayhem started! I tried to post the links, but Google kept telling me that it cannot save each time I tried to put a contacts address on the Email!

I wasn’t sure if the problem was the internet connection or with Google. Or had I made a mega-cock-up somewhere? This is possible, it has been known in the past, you know! Humph!

After an hour or so of faffing about and getting nowhere fast, I asked Google if they had any problems. This came up? It didn’t help me. Apart from I now knew the hiccup was with Google Gmail.

I tried to use the M Mail, but it needed so much time and effort to set up, I thought I’d leave it and hope it comes back on later. 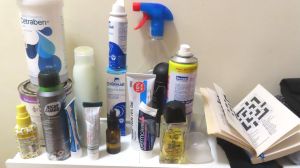 I went and got the early ablutions done. A had a few dropsies and a cut or two when shaving, but it was a fairish session. The medicationalisationing was a smidge messy. Harold’s Haemorrhoids and the funiculus were bleeding and stinging somewhat more than usual. 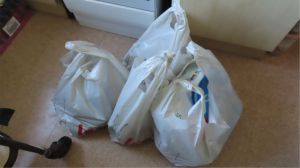 I made a start on this blog for a while, then the Iceland delivery man arrived, and put the bags through the door for me.

I got them into the kitchenette and started to store them away. 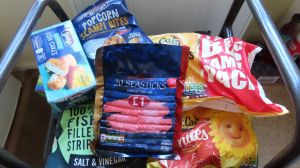 I’d bought too much freezer stuff on this order, and struggled to get it all in, but it was no good. The big bag of chips, I can’t recall ordering at all? 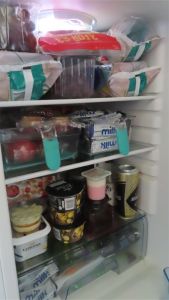 I put it down to my funny moment come turn yesterday when I was placing the order.

The fridge was another mystery to me, why had I bought pork pies when I’d sworn not to again? Hehehe!

I made up some black waste bags to go to the chute, a recycling one to go down to the big bin outside, then I put a few frozen things in a carrier to take to Jenny’s flat. She will make sure they go to a deserving cause for me. 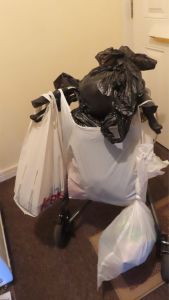 I meant to ring Jenny before going, but got all confused and forgot to! I am a Schlub!) Mainly, due to my battle trying to get all the bags fitted, so they stayed on the three-wheel walker guide. Tsk!

Got to the chute room and deposited the black bags. As I was coming out, I thought to myself, ‘I’m doing alright, here.’ Fate! I clouted my right shoulder on the edge of the door! And ever since, (up to now) I have been bothered by Shuddering-Shoulder-Shirley, so much, the whole joint is now aching. Gragglespitness!

I was going to go down to Jenny’s next, but I felt the need of another wee-wee coming on. My fear of my urge incontinence, made me return to the flat first, and visit the wet room.

Boy, I’m so glad I did – what a wee-wee it was! A BOSASSA (Blasting Out-Spraying-and-Suddenly-Stopping-Abruptly) mode. But I didn’t leave after cleaning up, for I just knew somehow that the MAD (Micturition After-Dribble) was coming. And it did. Smugness-Mode-Grade 3-Temporarily-Adopted! 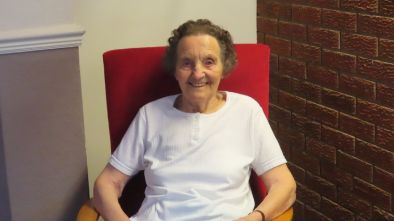 Back to the lift lobby, and caught the residents lift within seconds of pressing the button. Down to the ground floor and walked through the hall, saying my hello to Doris, who was sat in a chair and looking very fit and satisfied. ♥ Out to the skip, and back in again. When we had a natter, and I took her photograph. We both agreed that the Coronavirus isolationing had ruined our social lives. She kindly didn’t mention my jerking all the time shoulder, bless her. Ah, it’s Francis, not Doris! Sorry, Francis! ♥ Names, as with many other traits, are not my strongest point.

I got up to Jenny’s flat and left the carrier near her front door.

As I got in the lift up to the flat, someone had been smoking in the cage. Eurgh!

Back to the flat, and working on the updating again, and Jenny rang me, she’s worked out when she saw the Iceland carrier the things were in, that I’d made another cock-up and run out of room in the freezer again. Hahaha! I think I might rename her Sherlockski-Jenny. Hahaha! She’s made sure that the fodder was used for a good cause, Bless Her!

Sister Jane then rang, the link I’d sent was for the wrong day, Tuesday, not Wednesday! I was having another bad day! But we had a quick natter, and hubby Pete had gone out to town and was doing alright. Great news!

So, after the call and natter, I set about trying to find out what I’d done wrong. I clicked the Wednesday link, and it told me no such address is known! I was going crazy, trying to find out what I’d done wrong! I spent hours, and eventually, but I’m not sure, think I used a different blog name, GerryNottingham, not the usual tgc6244 one, and tried to resend with that one. I don’t know if it worked on Gmail, but eventually, after much anguish and a prayer, I clicked it, and it did connect? I sent the new link off, asking Jane and Pete to let me know if it was the right one. No responses yet, so my depression grew worse.

Pressed on with the diary, and the need for the Porcelain Throne became known. Off to the wet-room zone, alone. My bad poetry comes free! Hahaha!

Chrickus-shock-and-ouch! Another solid, excruciating session! Took ages, the crossword book was utilised. (Oddly, I got a few clues solved in mid-agony?)

I tried to catch-up on the Facebooking before the Firemen arrived. Had to stop, so I could sort things before they arrive. Back in a bit…

The intercom rang out, and two Firefighters seeked entry. Pressed them in, and they were soon at the door. The two chaps came in, and it became obvious to me, I was going to have difficulties in hearing what they said due to the masks they had on.

They were trying to be helpful, and I felt like someone was interested in trying to help. They question me as to what to do in the event of a fire, asked if I’d ever had one, etc. and then moved to support available.

I mentioned that the nurse had asked the falls team to contact me again, told and shown them Metal Mickey (the four=pronged walking stick), that the team had supplied me with on their visit after the stroke. They wanted to report my circumstances to the Falls Team again and explained why this is a good idea. Then asked if I minded if they contacted my Doctor, and Nottingham City Homes, which I agreed to.

The Brain Fog and fatigue started coming on, as is normal for me at this time of day, but with not getting any sleep last night at all, seemed more severe, and it was like turning off my concentration-box. Much of the memories of the last half hour of questions and suggestions went off into the ether.

I recall thanking them, and they said not to go with them to the door, and how odd it felt not doing so. The photographs I must have taken are the main-memory prompters, and I recall feeling a lot better, but a nuisance? 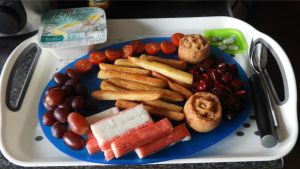 The nosh came out better than ever tonight. I recall being well-pleased with it. On the notepad on the Ottoman, I’d scribbled a tick, and 8/10! Getting to sleep was miraculously smooth this time, I was off within minutes, and that was despite the Though-Storms!

A minute or so into the kip and the landline flashed and rang. It was Jenny, bless her cotton socks. Nora had enjoyed the wine and battered fish she’s prepared for her. Jen was a little disturbed at waking me, but for Jenny, no problem.

I had no bother in getting back to sleep at all.

An hour or so later, and the landline burst into life again. This time it was a struggle, for I was in the deep-sleep mode to get to it in time. It was the Doctor’s surgery, with the new INR Warfarin doses (I’d written all this down on the small notepad). Tonight 2½, and then 2 a night until the next blood test, which is on Monday 24th August. (I found I’d put this in the Google calendar in the morning, but can’t remember doing it, Tsk!)

8 thoughts on “Inchcock – Thurs 20 Aug 2020: Ineffable improvements to today’s activities, with much soliloquizing!”