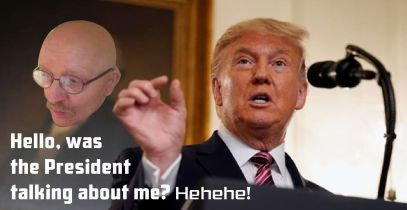 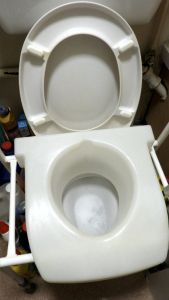 03:20hrs: On my regaining consciousness, I feared straight away that I would not make it in time to take the urgently needed wee-wee. Determined to save having to change the PP’s in case of any escapages, and the self-embarrassment, I fumbled my way, out of the £300, second-hand, c1968, rickety, rusty recliner, and hauled by stomach on legs to the wet room, as fast as I could manage. And, without any walking into any doorframes! Smug-Mode-Considered, but not adopted, yet.

The fact that there was the OGPEB (Overnight-Grey-Plastic-Emergency-Bucket) that I passed en route that I could have used didn’t dawn on me until later. (What a clot!) The mode of wee-wee was an RSP (Reluctant-Sprinkly-Painful) one, and soon over with. Still, there were no PMD (Pre-Micturition-Dribbles) leakages. I then engaged a mini-smug-mode! Cleaned up and off to the kitchenette. 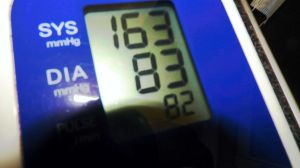 I got the Health Checks done first. A bit of a shock from the sphygmomanometer SYS reading results; back up to 163. now. Tsk! DIA 83 and Pulse at 82, both seemed highly acceptable figures to me.

The stick-thermometer showed up a temperature of 34 point something or other, celsius. Not one of my betterer photographicalisations! Things seem to be at the whim of nasty young  Nicodemus’s Neurotransmitters again, at present.

I bravely opened the window, to try to take three similar shots of the view, in different modes; I want to find out which is the best one for night shooting. But every time I try this, they come out different to the morning before’s efforts? I think I have reached my peak in photography, the ailments and stroke have to be acknowledged as the main perpetrators of this calamitous failure! Hey-ho! 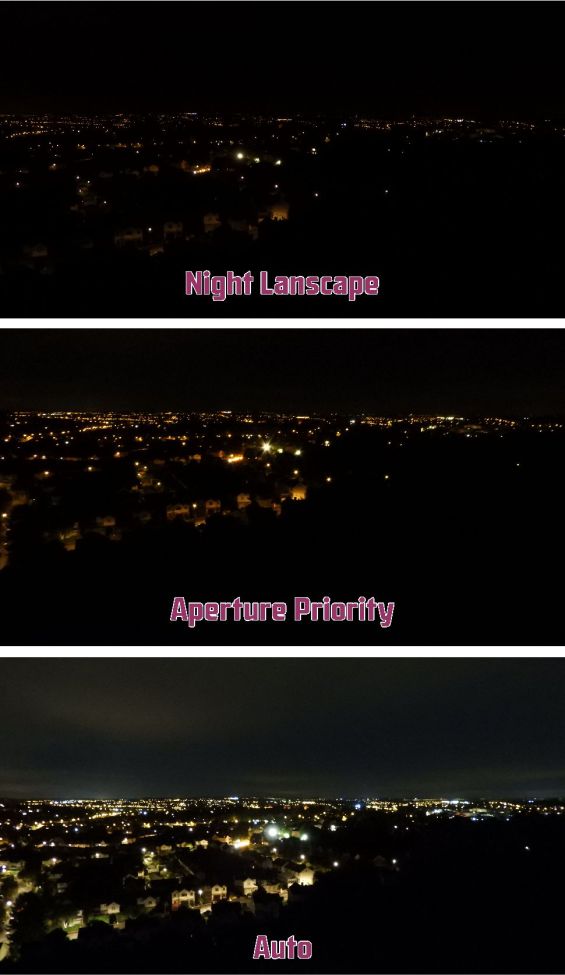 Five hours later, when creating this blog: Oh, dearie me, I’ve just Published this by mistake! Nicodemus’s fault again! I get annoyed sometimes!

So, I copied it with a different title, then deleted (binned) it. And wallah! I can carry on again. Ay-yay-yay! What an Eizel! A positive Putz! Shlimazel, Shlump and Shmegegge!

I took a photographicalisation from te unwanted, letting rain-in, thick-framed, impossible to get at to clean for old folk, designed by an uncommunicative sadistic Gerontophobic, in hopes that injuries will ensue to the elderly residents, window, of straight down on Chestnut Walk.

I made a brew of Glengettie. Took the medications, and returned to the front room and got the computer going, to start updating yesterday’s diary of woe.

But, no! The flaming Micro 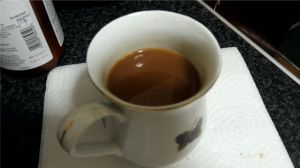 soft Pictures ap, would not find or read photographs at all! Argh!

After another wasted hour or so, it started working. I’d like to think this was due to my brilliant, cunning, changing options and searching for help on the web – but it wasn’t. I had no idea what the heck I was doing. Gragnangles!

I got the photos loaded and doctored to suit me, and despite Nasty-Nicolas’s Neurotransmitters, I got the updating finished. I’ve felt better and fitter after a gruelling game of squash than I do at the moment! I hate computers, no doubt because I can’t fully understand them? Like with the new camera, I’m at a loss!

: As I was about to make a fresh brew, the innards stung at me, and a movement from the bowels started off on its own, or rather the innards rangatiratanga, against the door frame! Shame! Got seated and the action began, slow. Painful and massive! As I took a look so I could fill in all the questions on the Bowel Movement log, I was gobsmacked to see thick white streaks in it! I’ll not go into any more detail. Just to say, it frits me!

A thorough clean around, hand-scrubbing and back to the computer! Taking extreme care in getting through the doorway!

I got the Email-link sent off. Then on Facebooking catch-up. The WordPress Reader section, and Pinterested some of the photographs. The updating took me longer than it ever has before! A bit like going to the toilet, really. Hahaha!

07:50hrs: And Herbert was up and about, judging by the clunking and tap-tapping coming from above. If he wasn’t so taciturn and snobbish, I’d love to ask him what it is he’s making, this time.

As I started to update this template, a repeat performance from the rear-end arrived. I really fell off of the swivel chair in my haste to the wet room. And what a difference this time. Even more painful, but so much quicker, Shplurt and done! Messy this time. It came in broken sections and had sunk out of view, and that’s a first for many months! So I couldn’t see if there were any of the white streaks in it. It was undoubtedly wetter and messier than the previous one – but why did it hurt so much? However, it was a rare second visit, so hard to guess.

Back to computing and wee-weeing. Haha! Not at the same time!

I’d not been going long when the landline burst forth. Aha, it was Jenny, bless her cotton socks. She’s arranged for the window cleaner to come and do me tomorrow. What an Angel! We had an enjoyable good long chinwag, a laugh, a moan, and she really cheered me up!  Thanks, Jenny! ♥ You’ll never know how much you brightened my day!

As I put down the phone, I knocked the pen and pad off of the desk. Thinking it was a good idea, I continued to replace the handset, and I saw the long picker-up on the flat airing bars, “I’ll use that” I said… As Robbie Burns wrote, “The best-laid schemes o’ Mice an’ Men, Gang aft agley”!

I knocked the waste bin over fetching the grabber, and had a right mess to sort out! Tsk! I think I might have said something like; ‘Well, fancy that!’

I was well-late in getting the ablutions done. So, off to the wet room! And I thought yesterdays session went well. But I was even luckier today. Teeth cleaning, hardly any pain from Toothache Terence. Shaving, one, yes, just one nick! (I even went into a super Smug-mode, typing this, Haha!) The showering had not gone as well for months, no bangs falls or knocks, and zero dizzies. Just a few dropsies, soap, flannel. (Smug-Mode Upgraded to Defcon Three!) The legs were as near to normal as they have been for years now!

The drying off was easy and accident-free! Ah, the medicationalisationing, well that was the only real bother. The furuncle started to bleed and puss-out a tad, that was a painful experience. Harold’s Haemorrhoids bled a bit. But the worst was putting the PP’s on, I had a loss of balance when I went down, I caught the furuncle on the corner of the floor cabinet. I apologise to anyone who might have heard my ‘Argh’ followed by a naughty word! But it didn’t half sting!

Gone midday already now. With so many Whoopsies and Accifauxpas, and a lot of time sorting them out, I was going down in spirits, but I thought of Jenny, and her brave outlook on things, and it stopped the rot.

Back on the computerisationing. Must find time to do at least two more graphics for the page headers, and make another template for tomorrow. I’ll make a start on it now. Back in a bit, I hope, anyway. Haha! Got on CorelDraw and began creating.

Only one done. I made it too complicated a graphic, and got involved in creating something for far too long. Then had a look at the latest Coronavirus figures, and turned off to get the nosh done.

The canned pork knuckle, various tomatoes, fries, garden peas and beetroot salad made up the meal.

Flavour-Rating was given of 8.8/10, that knuckle is tasty enough for Her Majesty, although it will most likely be Pheasant and Port she’ll be having for her supper. Hehe!

Herbert is still at it with his modelling. Klunk, tap, tap… I’d love to know what he’s making.

Had the first serving of the Iceland-bought ice-cream after. Not the best tasting I’ve had, but it made a nice change.

Washed medications and got down in the £300, second-hand recliner, to watch some more of the Dr Who DVD. But again, I kept nodding off and waking minutes later. So turned off the TV, and got ready for the Thought-Storms… but they didn’t come. Ye-Haa! But sweet Morpheus did.

Unfortunately, at precisely 23:55hrs, I was rudely awakened by several (Obviously loud, or I would not have heard them without my hearing aids in) tapping or knocking sounds. It reminded me of some TV programme where the Grandmother would tap her stick on the bedroom floor to get the families attentions. (Wish I could remember the name of the programme now) The knocks seemed to be coming from right above me (Herbert). About six of them, all paced-slowly, as if timed, or made by a machine? I was concerned, is Herbert knocking for help? Then I pondered over whether it was fireworks, and had to get up to check outside, but nothing seemed out of order. By then, any chance of getting back to sleep had dissipated, so I stayed up. Grobleknackerbangles!