I do hope you enjoy this bit of Nottingham history.

Please let me start with a sad point, the end of the much-loved Metropole Cinema, (Remember the open log fire?), and the business ventures that followed and failed.

Regrettably, I could not find a decent photo of the Metropole in its glory days.

Located in the Sherwood district of Nottingham at the top of the hill on Mansfield Road at the corner of Elmswood Gardens. The Metropole Cinema was an outstanding suburban cinema. It opened on 3rd August 1937 with Fred McMurray in “Champagne Waltz” and Marsha Hunt in “Accused Finger”.

A striking feature of the exterior was a slender fin tower on the left of the building which had the name ‘Metropole’ across the top. This could be seen for miles around. Inside the auditorium, seating was provided in stalls and circle areas. The proscenium was 60 feet wide, and the stage 18 feet deep. For a while, they had an open fire in the reception hall, and this was much appreciated by many in winter.

Initially, it was independently operated by W. Wooley & T. Wright, who ran the Goldsmith Street Cinema. The Metropole Cinema was taken over by the Associated British Cinemas(ABC) chain in 1943. Closed by ABC on 27th October 1973 with Malcolm McDowell in “O Lucky Man”. It was leased to the Star Cinemas chain who converted it into a Star Bingo Club. Closed as an EMI Bingo Club in 1979. Then the interior was stripped out, and it was converted into a supermarket. Last used as a Kwik Save Supermarket, it was closed around 2004, and the building was demolished in 2006. A Somerfield supermarket was built on the site. Later a failed Co-operative Food Store. Now, it is a 24-hour gym.

I use it myself three or four times a week, you know. Only for three hours a visit. Hahaha!

The earliest photo to be found was of a Horse Tram, on an outbound journey, about to pass Devon Drive, and the then called, the Methodist Chapel.

c1920, oh, how life must have been then. The electric trams were kings of transport. Just look at the motorbike! Kids strolling across the road.

Ah, now we are talking. Note how the rain always look more foreboding in a black and white photograph? The housewives make time for a natter, and no doubt to bemoan the rationing still on so many foods? The Marsdens food stores were the tops then. I worked for them when I left school at 14. The best job I’ve ever had! Happy times.

Opposite where the library is now, I think anyway. 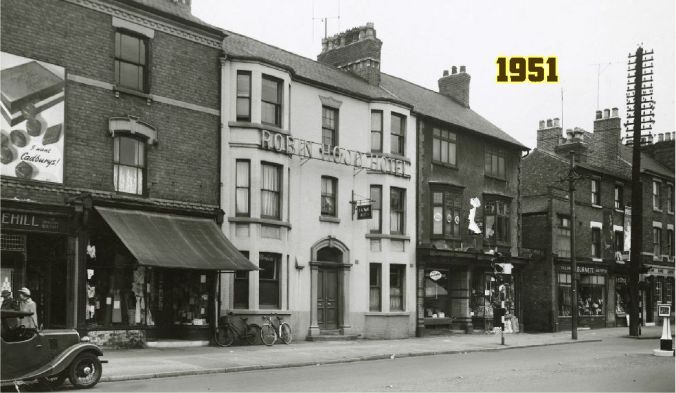 The Robin Hood Hotel. I frequented this pub years later, for the company, certainly not for the taste of their Home Brewery beer. Eugh! Haha!

Ah, the Vauxhalls, Austins, Hillman, Wolseley’s, and Morris vehicles. All gone now, I’m afraid! Look at the sensible clothing worn, the ambling pedestrians, and lack of street-sleepers and hooded youths. All changed nowadays, not always for the better! 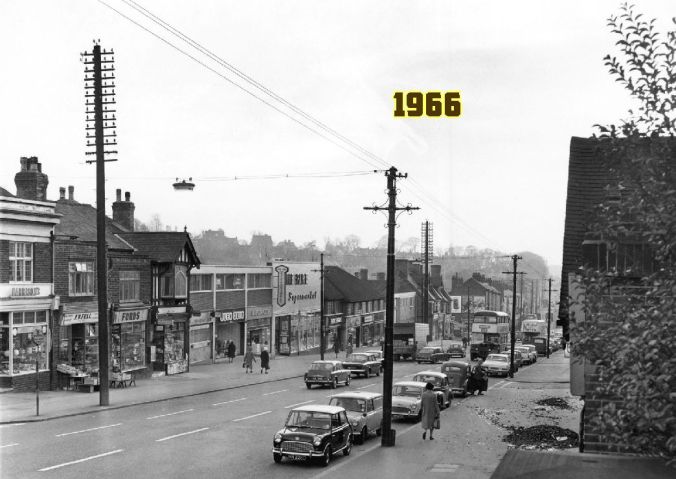 Fine Fare Food Supermarket, late Wilko moved from over the other side of the road. The excellent sell anything Fords clothing shop. The Regent five buses. Ah, sad!

A relative newcomer to our roads, the Mini! The Bass Beer sign? No double yellow lines! The broken crossing beacon! And the general gloom, that’s back with is again, only worse, we can blame the Coronavirus for that. Tsk! 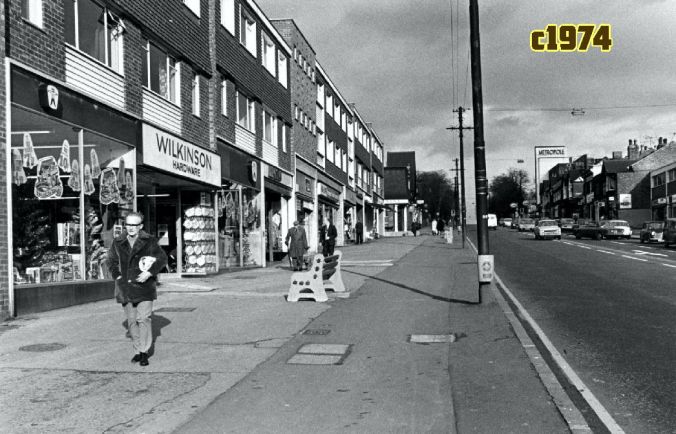 Aha, Wilkinsons before it moved and got renamed Wilko. Is that where the Japanese restaurant was opened? I can’t see any bus stops on this stretch?

It must be early morning, judging by the lack of vehicles and pedestrians in this photo?

Kwik Save, in the old Metropole building, still going in this shot. I liked to shop there, a good car park at the back, low prices, and stale bread on sale. Hahaha!

Is that Drayton, or Melrose Street? That garage was great for repair prices. I took my three-wheeler Robin estate there years earlier, and got a new manifold fitted, dirt cheap! Fair enough, the engine blew up a week later!

I remember standing under a shop doorway to take this one, and I missed the flipping bus! Still, you don’t like to complain, does yer?

I hope I’ve stirred a memory or two and raised a little laugh. TTFNski! ♥