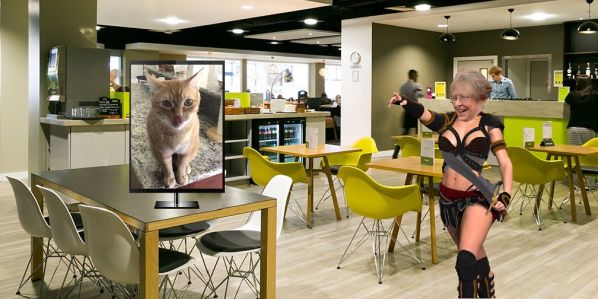 Janet sees Henry on the television! ♥ 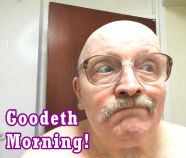 01:15hrs: The regular waking up in need of a wee-wee, a struggle out of the £300, second-hand, c1968, recliner. Then the catching of my balance, and the hobble, to the EOGPB (Emergency-Overnight-Grey-Plastic-Bucket). Partook in a partaking in an SWP (Sprinkly-White-Painful) wee-wee, which must have lasted for about 10-seconds? Mmm?

To the wet room, to clean and sanitise the bucket, and the need for the Porcelain Throne arrived. Good timing! And what a pleasantly acceptable surprise as well! Very quick, I think someone had placed a pump or motor in the innards, Hehe! It was a long-extended dollop, but it was out and done within seconds! No mess, minimal bleeding, but most importantly, far less painful than it’s been for months! Yee-Ha! 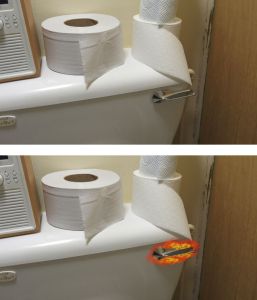 But, would the evacuated product disappear with one flush? No! I kept filling up the tank by hand, tried putting bleach down, prodded and poked with a stick, but it took at least eight flushings before things cleared (At least I hope it has!)

The flush handle was getting hot, I’d used it so much. Hehehe! I couldn’t resist doing a bit of CorelDraw skullduggery on this photo later on.

I found myself pondering on the days’ needs and musts, the Sainsbury order due, the Nottingham City Homes maintenance men calling (To look at the balcony door, I hope), and the Vampire Nurse is due to take the Warfarin blood to be tested. I think there is something else that’s not on the calendar, but it’s all a bit vague in the head – No change there then!

I got the Health Checks tended to. Once again, the BP sphygmomanometer gave forth a decent SYS count for me, at 148. The DIA 74, and Pulse was at 80. These seemed okay as well. I considered assuming a Smugness-Mode, but I decided against it.

The stick thermometer reading of 34.3° was another good one.

A betterer photo of the thermometer this time. I used the Nikon camera. Then took a couple of shots of the morning view across Nottingham. One photograph, the first one, with the Night Landscape setting, the second in Aperture Priority setting.

The AP one was a lot closer to how the view looked to the naked eye. Such an excellent deep blue all around.

Will, or are things improving for me, luck-wise? Are perhaps the mysterious wonders of Woodthorpe Court; the entities, ghosts, hobgoblins, boll-weevils, aliens, gremlins, grotesqueries, urchins, karakia-cursing-hallucinations. Materialisations, poltergeist, lemures, wairuas, kehuas, manifestations that permeate, pass through the pores and interstices of space, through the time-continuum. Usually, without rupture or displacement within the building. To cause havoc, fear and frustration, as they dislodge time itself, in their aspirations and skulduggery, to complete their given by Satan mission; ‘To destroy the sanity, confuse, and scare the hell out of Inchcock, by getting him to start feeling confident? Then shattering his foolish hopes, and giving him a pasting of chronic bad luck? Got carried away there again. Sorry!

I began updating the Tuesday diary, a lot of work to be done on it. But, I ploughed on persistently, ignoring the oh, so many corrections I had to do, thanks mainly to SSS Shuddering-Shoulder-Shirley, and the tenderness of the right hand’s PICP (Proximal Interphalangeal Cartilage Pain). A mouthful that one is, Haha!

I finally got the updating finished. Sent of the email and link. Then made a template for this post, and started it off. But not for long, the ablutionalisationing needed to be done, time was moving on. I got the jacket grey-jacket soaking in the kitchen sink, then got the ablutions done.

Remarkable indeed, twas a stand-up job, too early to use the noisy shower. A handful of dropsies, no dizzies, no falls, no toe stubbing. Only one nick shaving! Yes! The medicationalisationing of the rear-end was bit hurtful but was to be expected now that the attentions of Constipation Conrad are back. And the legs looked so good – still deathly pale of course, but still, I mustn’t complain.

The Sainsbury delivery man rang the intercom, and I admitted him. There didn’t look much in the box he put the food into for me. I checked on the paperwork.

There were unavailable items that had not come, this made my total spend lower than the minimum for free delivery, so the numbskulled, greedy, rich-aristocracy owning scumbags, added a £3 delivery-charge! Grumbleconfusement! Balderdashness! Teeth-Gritting-Gnashing and Buggleworthlessness!

Still, I have to give the robbing arse-holes credit, they saved the day sending me some butter, Germoloid, potato cakes and Irish Farls. Oh, and the Surimi sticks. And the potato farls had only one-days shelf life on it! Huh! 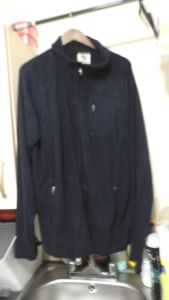 I got the grey jacket from the kitchenette’s sink, and thoroughly rinsed it with fabric softener, then, all done, wrung and hung to dry on a coat hanger above the sink unit.

: I realised I’d not got the Alarm Wrislet on. Obviously, I thought to myself, I’ve left it in the wet room, it’ll be hanging on top of the Opium bottle… no hang on, that’s not right, erm… Olmesartan bottle, where I put it every morning while showering… But No, it wasn’t there! So I had a search around, a ferret, hunt, and or rootle, all over the place. A panic-attach was a probability, but luckily I found the wristlet. I’m too embarrassed to say where Tsk! Fool!

The Nottingham City Homes fitter called me on the landline. He’s on his way.

He arrived ten minutes later; and set to work on the balcony door and lock. It had been fitted wrongly at birth. Haha! A bit like me, then! It seems that other blocks, as well as Winwood Heights, have been having trouble with their balcony’s and locks. He soon had me sorted and checked that I know how to use the lock and key.

But I didn’t have the dexterity to use the key, but it can lock by pulling up a lever as well. Fair enough then. I thanked the young man, and he shot off. Sociable bloke.

Then the Vampire nurse arrived, let herself in as I asked her to, she soon had the blood taken for the Warfarin test. She was also sociable and pleasant. I thanked her, and she shot off (busy).

As Herbert kicked off again, I went on Facebooking catch-up. Didn’t take too long this time.

Now I can plan to get out to the Poundland store, later. Yipee!

The door chimes rang out there ♫I only want

to be with you♫, tune. It was Deana to tell me that the flat lobby floor is going to be worked on and is out of bounds for about an hour.

So, getting out to the Poundland store is now cancelled. Humph! Gawd, it’s hard work living here!

Italiano nosh prepped in the oven (ready-made Cannelloni Ragu) A new product from Iceland. I have to say it looked most unappetising when I took it out of the box, and covered the top with grated extra strong cheese, before going into the oven. Sliced some mini-tomatoes and sea-salted them, and apple, and a pot of lemon mousse to follow.

Well, it looked delicious when cooked, and tasted almost divine when eaten. The tomatoes were excellent, well, it all went down okeydokey indeed. A Taste-Rating of 8.5/10!

Got the few pots used cleaned, checked on the jacket hanging to dry, left it until morning, not dry enough yet. Took the evening medications. And down in the £300 recliner, in search of sweet Morpheus.

Again, like last night, I kept dozing off and waking again a few minutes later, and this lasted for hours. But tonight the Thought Storms were intervening as well.

Then I must have stayed asleep longer, cause when I woke, I could remember bits of a what seemed very lengthy dream I’d been having; Not sure where I was, I didn’t recognise my surrounding, but there were black cats everywhere, the purring from them, was like sweet, calming music. At one stage, I was coming up some cellar steps, and the black felines all jumped on me from the steps above… the memory gets vague then, but later I found I was in a hospital bed, and the cats were lying all over the bed, taking very orderly turns to come up and nudge my chin with theirs.

This delight seemed to go on for ages, but when I woke, I think, not sure, that this mammoth dream had been had in seconds. This is the first dream I’ve remembered in months, in fact since the stroke, I think. Purr! Haha!