That’s my kind of salad Pattie! ♥

02:25hrs: I woke, in a generally more optimistic mood. I’ve not got the foggiest idea why? The dreaded ‘Hum’ was with us again, but not as loud as yesterday.

As I began assembling enough thoughts and ideas to start planning what needed doing, what day it was etc. the need for a wee-wee, worryingly urgently, arrived!

No EOGPB (Essential-Overnight-Grey-Plastic-Bucket) was in its usual position? So, obviously, I couldn’t have had one during the night. Maybe this is why the urgency was so acute? 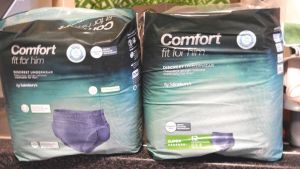 The process of getting up, catching the balance (dodgily), hobbling in agony with the papule underfoot, getting to the WC, and taking the abysmally dribbling, weak, tinkle, took me a while.

And now here I was with the new Sainsbury’s substituted medium for large-sized Protection Pants, torn while dropping them, and lay down around my ankles! A flaming good start to the day! I saw that a bit of blood had leaked from Little Inchies fungal lesion – this is because Sainsbury’s substituted with smaller pants and they must have chaffed at the wound. I put on one of the old normal white PPs. So much for me waking up in a better frame of mind, that silly idea, soon dissipated!

As leaving after the kerfuffle and sorting out, I had to go back in, to use the Porcelain Throne! Do you know, ‘someone idiot warned me over 70 years ago, that a time will come as get old when I will be bored!’ He lied! Giggle!

However, the mode of evacuation was almost the opposite of Tuesdays. Trotsky Terence had the upper-hand today, a 2-1 win I’d say! It was grand not having to struggle, and besides that and also, there were only tiny bits of bleeding! Oh, yes! Mind you, it still hurt, just a lot less.

I got on with the Health Checks, remembering today (I forgot yesterday, but had the photos on the blog to find the numbers) to fill in the record logs. The Boot’s sphygmomanometer showed an increase in the SYS up to 161.

The Harpin Xian Di Thermometer was again in the green, at 36.4°c was about right methinks.

I took the medications. Having forgotten to take last nights yet again! I must remember to take the morning ones later on. Then, I went to make a brew and had a mind-bending experience… “I thought, I’ll have a mug of the decaffeinated crap, then I can tell the doctor the truth when I say, “Oh, yes, I’m drinking the Yorkshire brand of no tealess teabags, regularly” Ahem!

After getting the kettle on, I took three shots from the kitchens unliked, light & view-blocking new windows of the morning view. I tagged them together later, left, ahead and to the right order. I think it gives a better idea of the marvellous view I can get from my prison cell… erm… flat! 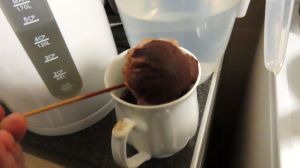 I used two tea bags in the little mug. Hopefully, this might produce a brew that resembles something like tea.

I left the bags in for a full five minutes to mash properly, holding out high hopes of success. Ersatz Crap! But so as not to fib to the lady Gastroenterologist, I have two sips, before getting a proper mug of Glengettie made.

As I took the photo of the mug of tea, a message came up on the camera viewing screen; ‘This battery is empty’ – Oh! I got in on charging and using the old little Canon until the Nikon battery had been rejuvenated.

I got on with updating the Tuesday blog. It took a good few hours, but I got there in the end. Emailed the link, Pinterested some photos, and did the Facebooking catchup. Good timing as well, cause SSS (Shaking-Shoulder-Shirley) then started to kick-off, had she this earlier, I’d still be doing the updating about next Wednesday, judging by the way she is going at me at the moment. Within ten minutes, the joint was aching thanks to her concentrated attack! 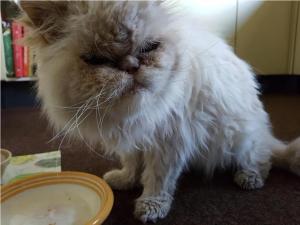 Reading a blog from Doug, about his beloved cat Andy, brought back memories of Sister Janes, Fooey. A similar cat to Andy, but white. The poor chap had arthritis, went almost blind… and never lost his sociability with people. The noises he used to make… I loved that cat. He passed away, I think JAne said he was fourteen at the time. This is one of the last photos I took after he’s had a home-perm from Jane. I am not ashamed to say, looking at him, and writing this, I’m swelling up inside. Doug has recently lost Andy’s brother, Dougie. I hope this doesn’t upset him. I check his and Andy’s site on WordPress.

I went on the WordPress Reader section, some interesting stuff on there today. Answered the flood of WordPress comments, both of them! You can see how popular my blog is, Hehehe!

Time to get the Ablutionalisationing tended to. And believe me, the teeth cleaning, shaving and showering, all went very well, remarkably so! Oh, yes, indeed!

The medicationalisationing was not so good! The spot or papule under the left foot, looks different today, just as painful, but like an ordinary spot? It had grown back as well, was no longer half-hanging off of the foot? Most peculiar! I spotted a little tiny new growth coming, below the little toe, that should be interesting, seeing what it turns out as, Haha!

The hardest part of this checking, was my getting my leg up on the right one, to take this photo. I dropped the camera, banged various part of my anatomy… several times, as SSS sent me all over the place hitting various parts of the wet-room furniture (No soft parts, of course)

Getting the leg back down again, was slightly more serious, the shock from the pain of standing on the papule again, combined with SSS having another bash at me, Arthur Itis not liking the knee being bent, a toe-stubbing against the sock-glide, and bashing my knee against the shower chair… Well, it was interesting!

Foolishly, I sat down again to take a close up photograph of the veins in the left leg, I could only get it up to the right legs kneecap this time. I think I have a mini-vein eruption? Hahaha! Very pretty, all the same.

I put the fist of the Amazon pants on to try today. They look bigger than the Sainsbury ones – Der! they would, they are a size larger! See how quick I’d worked that out?

They are not the pattern or colour of those shown in on the  Amazon site, though, nothing like!

Humph! As you can see, they are the same shade as the Sainsbury ones. No pattern to them. I felt a little cheated. Still, they are the right size, so they’ll have to do. The comfort and lack of warmth in then os on a par with the Sainbury wrong-size substituted ones, but I feel more confident that when the next ‘leak’ comes along, these will be more likely to cope with it. 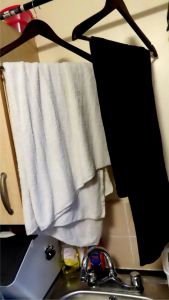 All dressed, I left the wet room and got straight on with the days handwashing. I did the bath towel I’d just used and jammy bottoms.

All washed, done, rung and hung above the sink. I then got the water spillages mopped up, laundry bottle cat found and retrieved. Then made up some small waste bags and put then in the box on top of the three-wheeled trolley guide, using the Nokia again now to take the photos, that charged up quick? Ah, done it again, I meant Nikon camera!

As I got back on the computer to make a start on this post, some loud taps tapping and banging started from Herbert’s flat above, right above where I sat. It was so loud, and persistent for an hour or so that I imagine it would be some repairs being done for him. Or, he might have been making a real life-size train for his charity? Hahaha!

I made a brew, of Thompsons Punjana, and went on CorelDraw to make some graphics for the page tops of the diary. I was having a bit of bother with getting CorelDraw to work, and frustration and fatigue set in, so I turned off the whole computer, and got something to eat, anything easy to do, I was so tired.

I got thinking and opted to make something I could do all in one – so got the oven on, with fish strips, and potato-letters in the kiln. Sliced some tomatoes, put desserts on the trayed plate, and the banging, knocking and clumping started again. It was very closed and loud, I reckon it’s some upgrading work being done judging by the noises, it was being made by several people, it’s been on and off all day. This must be them rushing to get the work done before going home time. (Of course, I might be wrong about all of this, it has been known).

I got the rushed-meal served up, on the tray, and to the recliner I did stray, ‘Please stay wake’ I did pray, long enough to eat it.

I had a bit of help the instant I got done in the recliner with the food, the bang-bang banging, started again. It had a sense of it being rushed. Perhaps the lads were trying to get it done and over with quickly? It didn’t last long this last ‘Hurrah’, I assume the lads will be going home now. Will they, like Arnie, be back? Hahaha! 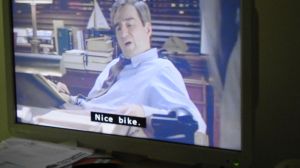 I’d put the TV on using the headphones to help mask the last of the banging session. Aha, Law & Order was on! I ate the meal (during which the banging stopped for the day), and I went to wash the pots. Then back down in the recliner.

My mind wanted to just sleep, and somehow avoided the Thought Storms, which was – Brilliant!

However, the body wasn’t so keen on kipping! A wee-wee was needed, and as I got up, I felt the splitting/cracking of the seal of the cortisone cream on Little Inchies fungal lesion; and the flow of blood starting!

Off to the wet room for investigating and medicationing. The bleeding was far less than I thought it was, and the Amazon-delivered PPs had coped well it, containment-wise. I washed and re-creamed Little Inchy, I got fresh PP’s on, and bagged up the old ones and took them to the waste bag box in the hallway.

By the time I’d got down again, the idea of getting to sleep was destroyed by the return of the Thought Storming. I’m not sure what time I drifted off, but it was hours later, after battling the guilts, shames and frustrations.

Yet, when I woke up, around 00:45hrs, it was with a slight spring in the air-feeling?