Amidst a Thought-Storm, an idea came,

For a little ode, a bad one, oh the shame!

But Inchie had to put pen to paper and write it,

Cause he got wet and went arse-over-tit!

But he knows he is to blame,

Still scribbled it, all the same! 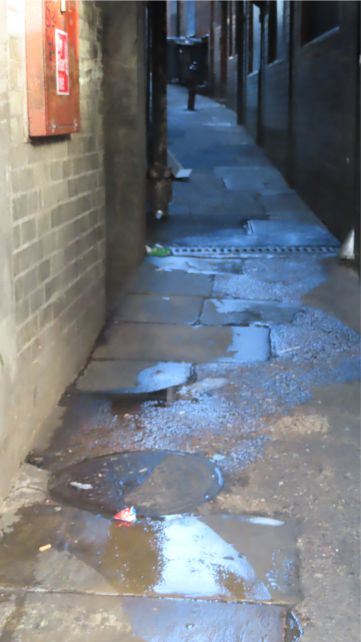 Has it been cleaned, if so, long ago,

The rats were running, to and fro,

The smell meant I soon had to go!

Not really art, dirty and so crude!

Ah, low windows on which to rest your weary bum?

Street-sleepers can watch the diners eat and suck a thumb?

Artistically, it has little worth,

It’s not worth a lot, but down to earth,

The Tate might buy it, they show other scum!

The Council can’t get it off of the floor you know,

People are still dropping it, though!

Petrol, bleach, I even tried a Brillo,

Chewing gum and a proper fork too!

Likely stolen from a restaurant,

They’ll take anything they want,

These Nottingham Street Artists do! 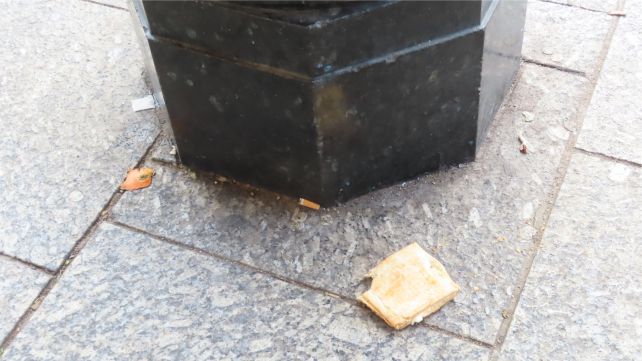 This is a waste bin on the pavement edge,

Around on the floor, a pastie, nub-ends, and a potato wedge,

A bit of onion, and some phlegm and spit,

I suppose it’s been done by kids at the college?

The entrance to a Long Row store,

The artwork here is pretty poor,

I see there is no chewing gum on the floor?

But below, you’ll see some more!

Or a drunken phone addicted kid?

Pigeons, it’s not, though their phoo is the same shade! 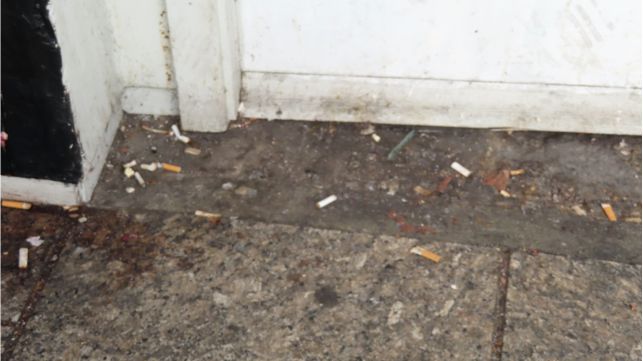 Back to Queen Street, where there’s real Street Art again,

My enthusiasm is beginning to wain,

Cleaning this up is such a pain,

The culprits should be slain!

Mind you, Brexit is a bigger problem and stain!

Inchcock’s wobble to Nottingham, in the rain

Got off the bus with some help from a stranger, walked down to town,

Galloping Horses were swirling or spinning around,

But no one riding on them, I found,

Damned shakes, I dropped the flipping camera on the ground,

Retrieved it painfully, and took some more shots from around.

As Nottinghamian’s, just strolled past.

The Nottingham Slab Square, It’s always there, It looked a right mess, to be fair!

Off I plodded, to the Poundland Shop,

T’was only a short little hop,

In search of drain unblocker and other codswallop!

I entered the premises, soaking wet,

I bought too much stuff again, not to fret,

I still had a little money left yet,

I gave the helpful lady, a thank you, she is a pet,

And gave her a can of Gin & Tonic! 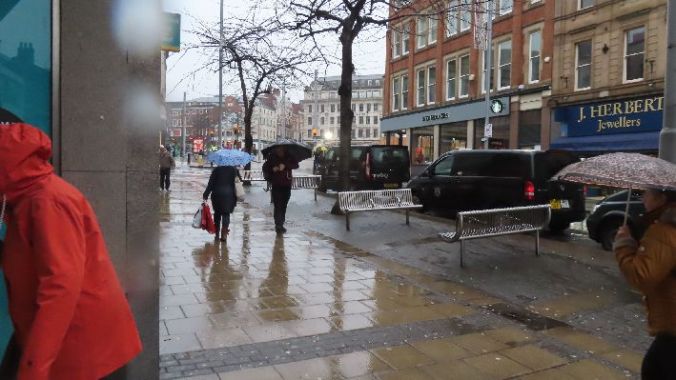 Paid-up, and out into the rain again,

Arthur Itis and Anne Gyna were giving me a little pain,

Mind you, I had indigestion,

And a slightly confused brain! 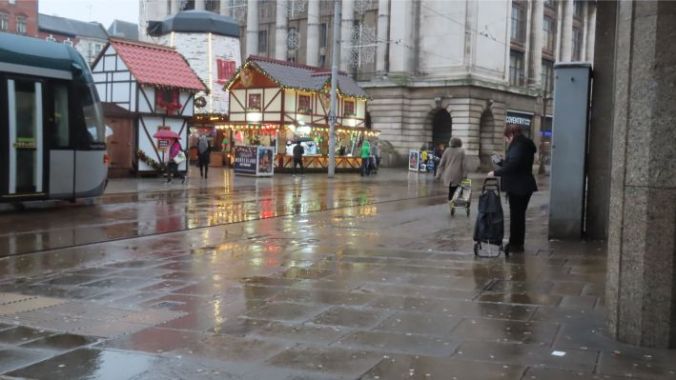 On to South Parade,

So, progress was delayed,

I was glad but amazed! 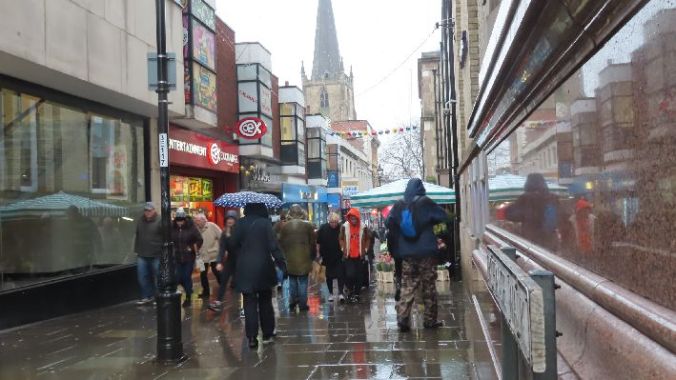 I took a photo, down Exchange Walk,

Not many folks having a talk on their phone?

People all around, yet I felt so alone,

I hobbled, struggling with the three-wheeled trolly-guide,

Through the Exchange arcade,

And out the other side,

For these stallholders, I’m afraid,

Not much money will be made!

King Street in the rain, showed another Council pain,

I bet they don’t have this trouble in Bahrain,

I view ditching gum on the floor, with disdain! 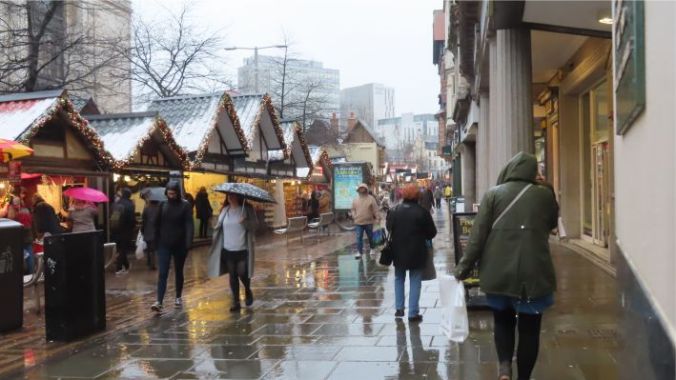 I crossed to the other side of Long Row,

Got under alcove-cover to take these, don’t you know,

The only permanent retailer was busy serving, on the go,

The folks in the rain, well, it’s better than snow!

I was well wet, and a little cold,

Not good for me, now I’m getting old,

Good job I’d had my flu jab, the anticold,

Despite the rain, I had to be bold,

So I dashed, wobblingly, to the bus stop, wet and cold! 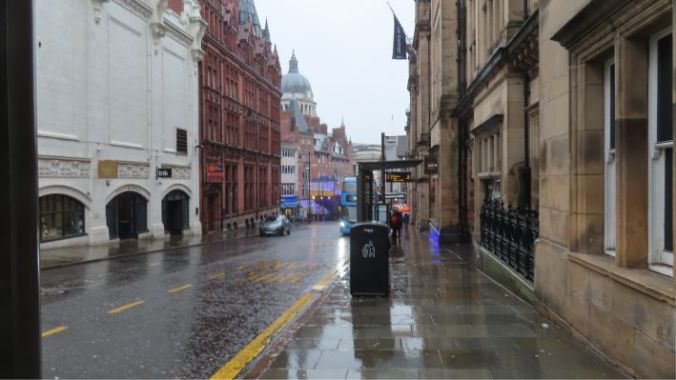 T’was bleak on Queen Street, waiting for the L9, 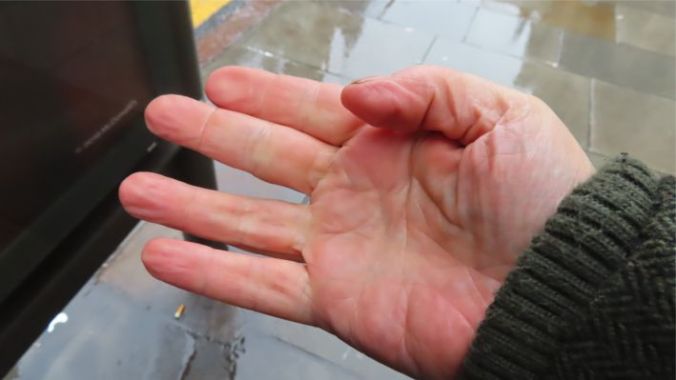 But I mustn’t whine,

Then took a moody picture, it came out fine!

The bus arrived, and it brought on a smile,

I went to get on, missed the step by a mile,

A bloke picked me and the trolley up, and helped us in,

I was alright after a while,

But this trip out, left me needing Codeine and Amoxicillin!

I think that should be Milliganesqueness?

This blog is lactose-free & suitable for vegetarians and vegans

No artificial colouring or flavourings were used

Inchcock is a semi-free-range production

They’re dangerous, uncouth and some are blind,

The ignorant swine are uncaring, and what’s more,

They often hit you, coming silently from behind,

They test your sanity, patience and mind,

They’ve no warning bells or horn, that’s for sure,

Belting along the pavements, they are a bind,

It’s no use if you beg and implore,

For them to leave more room, not be so unkind,

The few who reply, use sneers, curse-words obscure,

To roads and cycle paths they should be confined,

Their insults, two fingers you’ll have to endure,

Best to use your walking stick – hit ’em on the jaw! 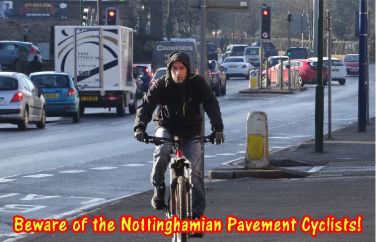 But that’s no solution, not a good idea, you see,

Cause they are young, fit and violence-loving,

They offer scowls and are threatening to me,

Some ride at me, I have to do some manoeuvering,

Which ain’t easy with the walker to push, you see!

Empathy, sympathy, and understanding they are avoiding,

Taking their photograph may get me a beating,

But don’t give up the struggle, become an attritee,

Join me on my hobbles, bring a Glock, that’s the thing!

They don’t scare me though… well, not too much.

Alright, the law-breaking and getting-away-with-it ‘Gits’ do! 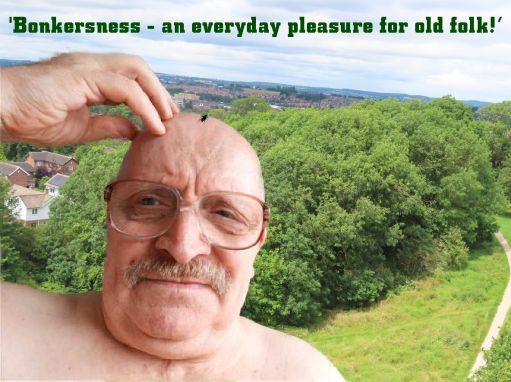 It’s a shock, when you wake up, not feeling unwell,
Take your medications, and rub in the Pain-Gel,
The heart monitor might well need a new Duracell,
You wonder around without clothes on, au naturel,
But you don’t realise, till someone does tell.

You and youngsters are on a different parallel,
You worry about your leaks, do they really smell?
Will someone be waiting for you, down in hell?
Sticks to your dentures do marzipan and caramel!

You’ve a shoebox flat to live in now and dwell.
But you call it an apartment, so your pride can swell!
Retentativeness goes away, you’ll forget how to spell,
Your short term memory will never again excel!
Steps, climbing, will make you fear any stairwell.

Doctors, dentist, you’ll be part of their clientele,
Podiatrists, Opticians, analyst, maybe the as well?
Audiologist too, you’ll not hear your phone or doorbell,
Psychoanalyst, avoid talking about your death-knell,
Well, they have a profit to protect, and service to sell.

We’ll lose our logicality, patience and sense of smell,
And when the time comes for to heaven to travel,
Here’s the really-surprising bombshell,
We can’t take clothes with us, even if they’re brocatelle,
No knick-knacks of gold, silver or tortoiseshell,
But I ain’t got none, anyway – so farewell!
I wonder if I’ll see Dad, Mam, or maybe a pterodactyl?

To the End of the Weevil War – Or is it?

Willmott Dixon started to upgrade my minuscule flat,
New windows were installed, that started the waring combat,
EIBWBBBs (Evil Ironclad Boll-Weevil black biting beetles) and a bat,
All came in and immigrated, hibernated, and that was that!
T’was eighteen months ago; and a long time is that,
They ate the food, and I was often bitten at!

It cost me hundreds of pounds,
Bug killers and traps did abound,
My coughing was the loudest sound,
But the poisoning of my lungs was allowed,
No help came, although I protested very loud,
I got the blame, NCH responsibility they disavowed!

I found the battle, very fascinating,
But no signs for months of their abating,
They found my apartment very accommodating,
And with the little Weevils, I started acquainting,
Although mixed in with some aberrating,
At least their bites had no sting!

Spraying Rentokill three times a day became a realisation,
Their cunning skills at survival caught my appreciation,
The Rentokil put me more than them, into aestheticisation,
The numbers grew rapidly of their aggrupation,
If I was ever to win this war, this losing altercation,
I needed more help, stronger ammunition!

My health suffered from this losing situation,
My battle plans were in need of analysation,
I planned to use bleach, and soda as acidification,
But they just swam in it, I was losing with ambiguation.

Of victory, I had no hopes nor anticipation, furthermore…
The effects of the spray left me with a cough and snore!
My further pleas for help, others did ignore,
Until another flat got the Weevils, they got help from me for sure!
Slowly the Weevil numbers faded, not so many anymore…
But occasionally, they’d return, these nasty, Weevil detrivore,
Last week, they came onto the keyboard while I used CorelDraw!
But yesterday was the first day when I saw them no more!

Oh, sod-it! I just went to make a mug of tea and spotted this. Tsk! 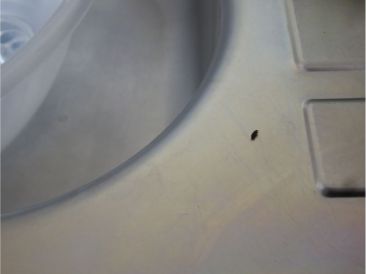 Unfortunately, old Inchcock had one of his self-pitying moods this morning.

When he found he had new boils, acne and the Furosimide induced Wee-Wees were mega-active, with the tsnunami-like splashbacks being unavoidable!

Then he checked his fluid-filled containers he calls legs…

Ah, that’s new boils on his back, bum and now new growths on his knees, as well as some more blood papsules showing on the pins!

These could be just a few reasons for his sad Thoughts Ode today? Hehehe! 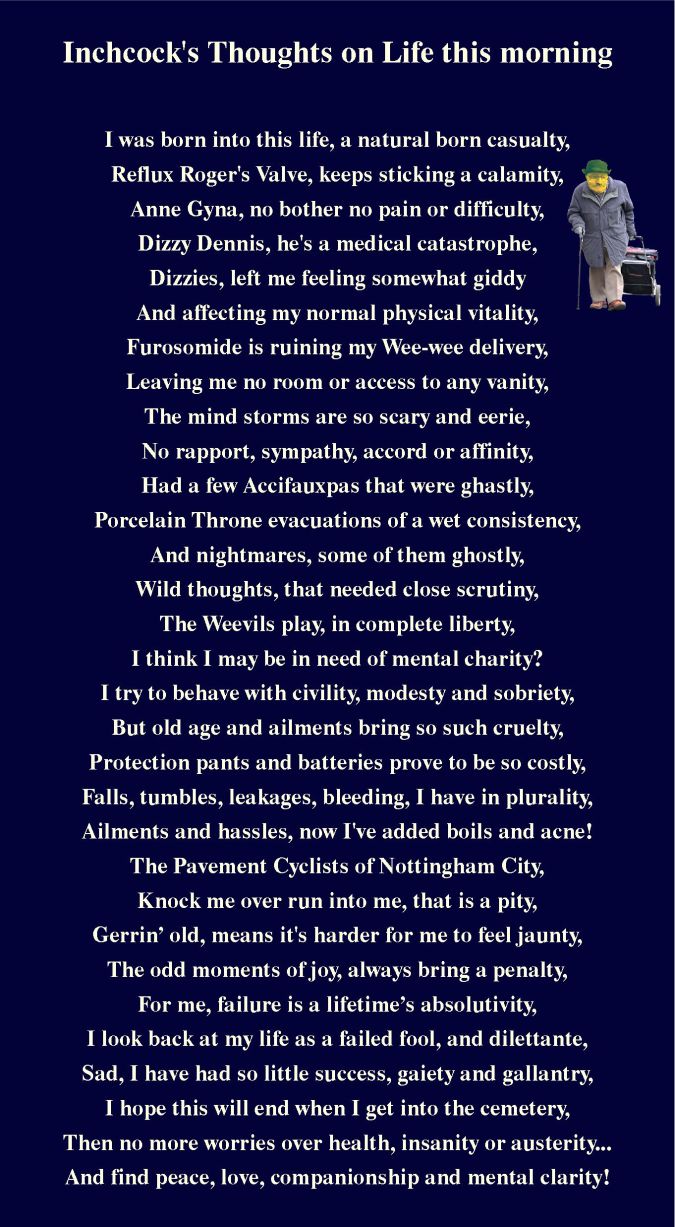 Created spontaniously from the mind of Nottingham City Homes Pensioner; in a moment of insanity and a blood of Furosemide induced Wee-weeing!

I woke up this Christmas Day Morning:

To find that the only parts of my horrendously Billy Bunter like body, that didn’t Ache or Hurt, there the left index finger and the right side of my right elbow!

I found myself singing, Johnny Kidd & The Pirates song, as Aching All Over in place of their, Shaking all over. The idea came to get some humour out of feeling so poorly, and I set about making this graphic, putting my version of the song in the yellow letters.

Christmas morning, and all I could do was create this bit of fun.

Hope you have a laugh, and a jolly good holiday!

Just a few thoughts and recollections about Inchies EIBWBBBs

Having got acquainted with my beloved EIBWBBBs, who arrived when the new windows were being fitted in the apartment, I think I would miss them now if they were to move on to another flat. We’ve had many happy times together:

Oh, how they loved the new Spare Room Window, with its holes in the filler and plaster and the cracks to hide and play in!

Of course, the new balcony being built brought them out in their hundreds, only to be slaughtered as their Guardian, Inchcock, spent hundreds of pounds of the last eight months of their sojourn in flat 72!

Above and below, the EIBWBBBs favourite hideout, the Wet Room. With its holes in the wall where could escape into the kitchen to the walk-in cupboard, climb in the wash basin for a swim, on the curtains so they could play at dive-bombing Inchcock when he has a shower… best of all, they had the escape route down the drain on the floor!

When the balcony door was installed, they had a wonderful time coming in through the cracks in the plaster and holes in the sealant.

The Kitchen was popular with the little mites.

Not Classified but interesting!

Before arriving here, as inmate 72 at Woodthorpe Court, I’d never seen a Weevil before in real life.