23:45hrs: I opened my eyes and wondered why the brain was in ‘Ignavia Mode’? While I could tell the cerebricity seemed active, there was a definite apanthropinisation in there somewhere, ensuring that any thoughts, questions, ideas or queries that came to the fore were dealt with using a reluctant flânerie style of response? I shouldn’t be surprised come think of it.  For the tired for some reason, fat body was also showing similar negativity in its clinomania, and desire to stay where it is, sprawled on top of the £300 second-hand rickety recliner. Slothfulness and inertia seemed to have plagued and infested poor old Inchcock this morning. Tsk!

It took me a long time to conjure up sufficient interest to get the body to move at all. The brain just ambled blasé along with whatever the body thought or did for several minutes? I thought maybe I was still asleep and dreaming. Mayhaps I was?

Anyway, things changed back to as near to any form of normality that I am capable of achieving, as I dismounted the recliner and stood on the picker-upper… Ouch!  Klutz!

The ‘La La’ state of the brain became semi-logical and responsive, as I made my way to the Porcelain Throne. The clock indicated it was now 00:22hrs. All of what took place during the missing 37 minutes from when I first awoke, will have to remain a mystery? Times like this, when things go out of the memory box are getting more frequent lately. Something else must have occurred in all that time, surely?

The self-loathing and fear of my going bananas was considered for a few minutes, while I completed the Throne session – A good one, no bleeding at all, and passable with ease. Of course, by the time I’d antisepticated things and washed the hands, the mind had moved on to consider other ideas and tasks. Like what day is it? Why am I only wearing one slipper? Are those biscuit crumbs in the dressing gown pocket? The notion of finding these things out intrigued me, but remained a velleity’ Hehehe!

These cunning Conotrachelus posticatus are more cunning than I ever thought they would be, eight months ago when they arrived after the new windows had been installed. Bless em!

I made a drink, of the Morrison Assam tea bags. I left the bag to brew in the mug, to get at least get some flavour from it, while I got the Health Checks completed. Which took me longer than usual, as the sphygmomanometer didn’t seem to want to work. I searched for the spare batteries, which took me a time to find. I found them eventually in the drawer underneath where the machine was stood, like two inches away… Humph! Swapped them with the used ones and still, the device did not operate. I took the new ones out meaning to put two different news ones in, and realised I’d put the two old batteries back in – and the thing worked! Can’t life get complicated!

The readings for the Sys and Dia had gone back up again.

The tea had gone cold by now, Humph!

I updated the Excel record.

And, back to the Porcelain Throne again. Mmm? Another excellent and plentiful session. I wonder if this mass-evacuationing is down to my having two smaller meals yesterday, instead of my usual one per day?

I got on with completing the Tuesday blog and got it sent off to WordPress.

The strange noises like the last two mornings were heard. These were similar to the others, like a grinding noise, but very feint. I had no idea where they were coming from, I couldn’t even tell if they were coming from up or downward nor inside or out? But, they were not bothering me in the least. I was interested in what they were being made by, though? Around about five or six o’clock.

By the time I had started updating this blog to here, it was 0730hrs! It’s been a messy morning mind-wise as well. Oy Vey!

I went on the WordPress Reader next.

Ablutions sorted out. Rubbish bags to the chute.

Back to the kitchen and took this picture in panorama setting. (Although it was another wide-shot disaster to me, why can’t I get a more wide shot to come out?). 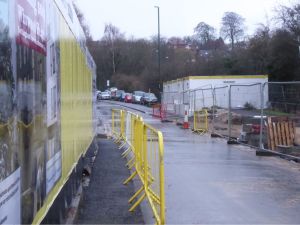 Out into the light drizzle and nippy wind, on my way to the Nottingham City Homes, Winwood Heights, Generaloberstesses Wardens Temporary HQ. Emergency WC, the Rumourmongering Clinic. Sarcasm & Insult distribution area. Tenants Socialisationalistic Area. Telling Inchcock off Zone. Crockery and pottery to be stolen from location, and residents porta-cabin. I had chinwags with Penny, Mary, Ray, and Malcolm. Out to the bus stop, more enjoyable gossips of a humorous, insulting, criticising and insulting nature were shared. By gum, we were all in good form this morning! Hehe!

I caught the bus up to Mapperley top, got off and walked part-way with Brenda, and to the Aldi store.

I had gone for just three things, but came out with about twenty! Humph, what a Schnook! Included in the list of unwanted stuff and bits that I did need were: Mini Wines, Jelly babies, small potatoes, carrots & peas, Part-baked Sourdough baguettes, tomatoes, oven trays, stuff for the nibble box, and treats in thanks for her hard work for Jenny.

I met Brenda at till we had a walk down back to the flats together. Good natter on the way down. With having two bags of fodder, I could not take any pictures as I struggled to keep up with the gal. Said our farewells as she nipped into her flat in Winchester Court, and I made my way, managing to have a couple of very brief natters en route, back to my beloved Woodthorpe Court. More nattering with some of the gals as they were waiting for transport to the Dinner session in Arnold.

I noticed that a washing machine was free, so I went up to the flat and got the fodder away, and gathered the laundry bag and down to put it in. Cyndy, Mo, Doris and two other ladies in the lobby still waiting for taxi’s to the dinner in Arnold, still. So I had some more talking, Mo and Cyndy were with them. ‘Good’

Back up and had to change plans for Shepherds Pie, as I had burnt the potatoes! Grumph!

So, I don’t know what you might call it, but I decided that the minced lamb with lamb stock and mint gravy, tomatoes, peas and carrots, sort of stew would be tasty enough. I added a few rehydrated pieces of soy lumps, too. It smelt so tempting as it simmered away, my hunger pangs were activated. Hehe!

Down to move washing from washer to dryer.

I got the clothing transferred into the dryer, after cleaning the filter.

I wiped the insides of the drum of the washer, and decided to put the spray which was almost empty in one of the bare cupboards, guess what I found in there?

A Pizza in the laundry room cupboard???

It felt fresh as well? One of the gals said it was in the lobby yesterday on the coffee table?

I got the dryer going and back up on to the computer to start to update this post, well at least to make notes so I could remember for later on.

Down to collect the laundry.

What looked like a disabled chap and his son, were using the machines for the first time. I’m afraid they were confused by the number one washer, and he asked me about the odd times displaying on the panel. I had to humbly apologise for not knowing, and explained that it beats me, too! I could tell him about how to use number two washer, but of course, that was of no help to them at all. Klutz!

I nipped outside to view the gloomy weather, then returned inside, just as the dryer stopped.

Got the togs out and cleaned the drum and filter. Folder the clothing into the bag, said my farewells and wished the two gentlemen well, and back up to the apartment.

As I entered the flat, the pleasant aroma coming from the lamb-hotpot, (perhaps a more suitable description?) stimulated my taste buds into an ‘Anticipatory Mode’!

Did the Health Checks and got the medicines out ready.

I hovered like a brooding mother over my first home-made Lamb Hotpot (without potatoes) Carefully stirring and caring for the feast in the saucepan. Hopes were high that it would come out alright.

I turned out to be a gastronomic delight! Especially, when eaten with this small Aldi part-baked sourdough baguette!

I say on the £300 second-hand recline with the tray on my knee to eat it.

A full contented tummy, pleased with the chewing of the fat, blethering and tête-à-tête, sessions I’d shared in today… Wonderful!

Placed the emptied tray on the easy-chair next to the recliner… and fell quickly into a much-needed uninterrupted sleep for five hours. Ahh!