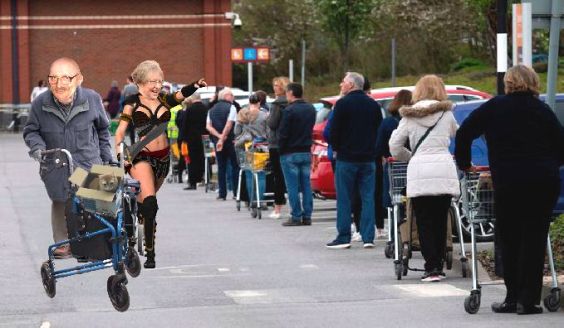 What are these two TFZers up to?

00:45hrs: Woke requiring a wee-wee. Which has been something of a rarity this week. So, I delayed not and hauled my overly-stomached torso from the warmth and discomfort of the c1968 recliner, caught my balance, and hobbled over to the NWWB (Nocturnal-Wee-Wee Bucket).

What a struggle that was! A weak, trickling affair that caught me out with both PMD (Pre Micturition Dribble), and CMD (Cessational Micturition Dribble). A check on the NHS Urologist chart proved that the wee was in the number 6 status! Very Dehydrated? I thought I’d been keeping up with the spring-water guzzling too? I’d better make sure today that I take a lot of it in.

I went to make a brew of Glengettie to get me started drinking. Made a decent looking mugful and added the milk… but the milk had curdled a smidge. That was the Sainsbury’s Jersey full cream one too! Hey, ho! I opened a bottle of Cravendale full-milk and made another brew. I took the missed evening medications. Tsk!

As I was stirring it up well, the need for the Porcelain Throne arrived. Oh, dearie me! All the signs were that it was going be another Trotsky Terence dominated evacuation. And it was, but with a difference!

I hastened to the wet room and settled quickly on the seat (Not wanting the embarrassment like yesterday of any early escapages). To my astonishment, there was no movement at all; well, the gurgling was there in the innards. I got the crossword book out and began to use it… but only for a few seconds. The action started, as anticipated; it was a victory again for

Trotsky Terence. Stinky-phoo, mostly liquids followed by a generous dollop of the gooey, sticky mass of faecal matter. I’ve never had such a chaotic, squishy evacuation as this one was!

Thank heavens I’d got the 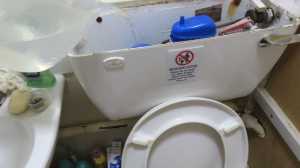 fresh TP rolls out ready after the nearly as onerous evacuation yesterday. Cleaning up took me a least ten-minutes, if not more. Then, the problem of getting the product to go away! I lost count of the times I had to refill the water tank. And I destroyed the wooden stick with so much prodding and poking of the congealed mass to encourage its eventual removal from the bowl! I felt

I decided to take the morning medications with another Acute Diahorrea Relief Capsule. I hope this one might work. 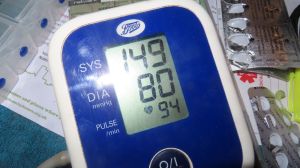 The usually dependable, trustworthy, Chinese manufactured Boot’s Sphygmomanometer failed to work the first time again. But it did show that the SYS had tumbled from yesterdays high of 180 down to 149. The DIA was 80. and the PULSE a little high as 94bpm.

The made in Hong Kong Chinese Harpin Xian Di contactless thermometer gave me a surprise. The body temperature had shot back up again? 37.5°c – 99.5°f, a bit over the top that was? Of course, I can’t get to talk to the Doctor about these readings, neither on the email or landline phone!

Lots of ambers and reds on the Excel record sheet now!

As I was starting the Sunday’s updating (I hate Sunday’s 👎), it dawned on me that I could hear the World Wide Hum! I could listen to the noise from above of the motor running? Jenny can hear that down on the 9th floor as well.

I got the updating finished and posted the diary to WordPress. Emailed the link. Pinterested a snap or two, then I went on Facebook catching-up. After which, I read and replied to some comments on WP. Next, I visited the WordPress Reader section.

Getting tired now. I went to make a brew, and I found that the morning had turned foggy, to put it mildly. Made a brew of Glengettie Gold.

Nearly time to get the ablutions sorted out. I was getting the watch and bands off of my

wrists. I noticed the Warfarin alert band had been strangulating the arm. So that was what the itching was earlier, Hahaha!

I foolishly opted to divert and get some 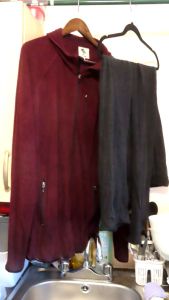 handwashing done before going to the ablutionary duties. I think it safe to say I got carried away somewhat with it this morning. I started off, doing the grey that should have been brown, Indian made, thin, cold, too long flimsy lounge pants, and a made in Pakistan Maroon zip-up jacket.

Got then done, wrung, rinsed and hung. The gear should be dry enough to wear by around mid-November or so. But I’d not finished yet, oh, no, when I go off on a tangential wandering, I do tend to get a smidge

Out came the mucked-up blue Pakistan Maroon zip-up jacket. And to long-sleeved t-shirts to get the Inchcock handwashing treatment as well. I must admit, this operation caused me more pain then the Porcelain Throne and wee-weeing put together earlier in the now freezing day. Colin Cramps kicked off, and I just knew that shaving was going to give me more agony later on. (Unfortunately, this was so!) EQ knew! 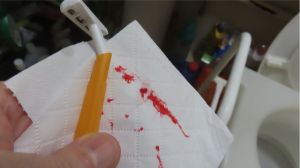 I got in the wet room and did the de-nasalising first, which went smoothly for once. The teeth cleaning left me with a little discomfort for some reason? I used the twin-bladed Bic razors for the first time. Which, with afterthoughts, may not have been such a good idea after all.

With the feet being hidden by the socks yesterday, I was surprised at my plates’ state. Both old ulcer scars seemed to be trying to make a comeback. And the tibial and spider veins were getting more prominent for the first time in months. Mind you, they were still more artistic than 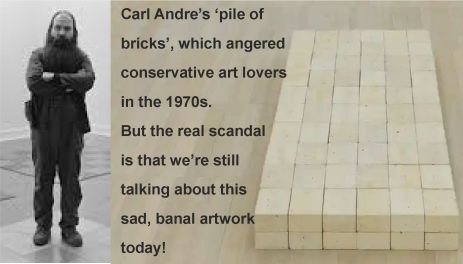 the idiot Andres’s pile of bricks at the Tate gallery looked!

The showering was an easy, almost accident-free session, to start with, anyway. There were no Dizzy Dennis visits and no banging or knocking into anything either, and

Neuropathy Pete didn’t give me any right leg dances! Plenty of harmless dropsies suffered throughout the shaving and showering. I think I ought to have been given a medal, or a mention in despatches, for my heroism in using the… wait for it – Sock Glide! Smug-Mode-Adopted! Especially with my putting on the new extra-long f diabetic socks for the first time! I put these on partly due to the Weather forecast on Radio Nottingham for tonight -3°c, 26.6°f. The too-small Morrisons PPs were worn as well. They are not very good protection but do keep one warm, at least. As with the long mesh bamboo hosiery. Not cheap, but just worth the investment. I also noted the signs of water retention in this photo wot I took after the session.

I’m afraid I flaked-out after that. There was no sleep, just a horrible awakeness and frustration at not nodding off, despite the weariness I felt.

The door chimes rang, Josie was returning the things from her Sunday lunch. She liked the cheesy potatoes.

I settled again and just sort of hovered between wakefulness and sleep-mode – not actually attaining any nod offs, though. Eventually, hunger arrived, and I got a nosh prepared. A disappointing result, the peas and leeks were okay, mind. Taste-Rating: 2½/10!

The day-dreamings went on and on, but would sleep arrived? No! Sweet Morpheus denied me even a little shut-eye. After a horrible night, sort of dreaming but being awake, the need for the Porcelain Throne needs, and SSS (Shuddering-Shoulder-Shirley) stirred me into action. Of a sort!