Popped around to visit Olive and sat there in the chair,

Moments it seemed later back in my flat, how did I get there?

Olive’s son was with me, then the paramedic appeared,

The ambulance came as I began to feel less weird,

I’d no idea what had happened to be fair,

Just glad that Roger was there,

Off to the hospital, joined the other patients in the ginormous queue,

Warfarin levels checked and the BP too,

They told me it was far too low, but by then I felt alright,

On a trolley and into the patient filled corridor till midnight,

Tests continued as I waited through the night,

Nice nurses shuffled me along as patients were admitted or released to their delight,

Making more room for us awaiting, some bloodied, a terrible sight.

Got to see the doctor, as Christmas Day dawned,

The poor man looked so weary, and he yawned,

They gave me a drink of water, to stem my thirst,

Then I waited in a side room, fearing the worst,

Two doctors joined me later in that bay,

One said he thought I’d had a mini-stroke,

He looked so tired, he was a kind natured bloke,

The other smiled at me and he began to say,

We can’t let you go, we must book you in some way,

Your BP is so low, your INR too high, we need to monitor your meds,

So, I joined the queue of patients on trolleys waiting for admission,

I felt whatever had happened to me, was now in full remission,

So I lay waited in the corridor, feeling in good condition,

An hour later some people appeared to say they had no beds available,

No surprise to me, I found this understandable,

“We’re releasing you, so you can go home!”

So out of the hospital, I did roam.

I went to catch a bus, although it was well past midnight,

I’d got no money or bus pass with me, oh, what a fright!

Can’t catch a taxi – the only option left… Hobble the five miles to the flat,

I felt such a clot, but pressed on… maybe the walk will help me lose some fat?

Got home shattered, porcelain attended fell asleep and that was that!

Awoke; no memories of any of me dreams,

Life feels far less confusing and not, so affictitious,

Even the medications with the morning cuppa tasted delicious,

But the evening nosh was tasty in the extreme!

Up at 0245hrs, porcelain duties and medications tended to,

Down to the laundry room, freezing cold it was too.

The washing machine left all my clothes very wet,

Had to use the dryer twice, clothes not proper dry yet,

Back up to the flat, clothes on the dryer flat,

Then noticed a fire in the distance that,

Looked a nasty one, hope no one injured.

0230hrs: Woke with Little Inchy bleeding merrily away. Decided to add the bloodied clothing to the laundry bag and go down to the laundry room, and get the washing done straight away.

During which I managed to knock my head on the top left-hand corner of the dryer, cut my finger of the cracked metal on the filter cage, trap my finger between the door and the sink cupboard and bang my elbow on the sink drain corner. 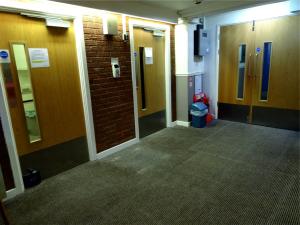 Noticed one of the chairs had gone missing in the foyer.

You can see the fading on the carpet where it once stood.

It reappeared later in the day?

The only highlight of the day was I got to visit Olive before I went out. She was not very well, and was now waiting further surgery. I love that woman.

Caught the bus to the clinic. Where the investigating medical team, as they got me laying down and they examined the lesion on Little Inchy through this gigantic electric magnifying glass contraption, with a new control apparently I heard them say. As usual, I had to remove my hearing aids so as not to interfere with the thing.

The new machine was a lot larger than the old one and blocked my view of the students, nurses and Doctors reaction and giggling about the lack of size and volume of the appendage they were investigating and trying to find a way to stop bleeding. After half an hour of smutty looks and amusement for them, I was taken into a room to have some needles inserted with some yellow liquid, that stung a bit, but only a bit.

I waited on the trolley while they analysed the blood. I’d been through similar before, so made sure I’d stuffed my book to read in the dressing gown thingy.

A different Doctor returned with the two others and informed me they were going to give corticoid (I think) cream one more go, and gave me a tube of a stronger one to use this month. This one must be kept in the fridge between usage.

The female doctor said if this does not work, she will arrange for me to see a specialist surgeon and discuss the option on skin grafting.

I went back to the flat and put the tube into the fridge, then set off to Mansfield to see if I could find any of the tins of Beef Goulash at the B&M store there. They had none.

Sister Jane rang me en route, and I agreed to meet Pete in the morning in town.

Back at the flat, I got the meal ready as I felt rather hungrier than usual.

It turned out absolutely divine tasting too! Vegetable sausages, pea-rice sticks, wonderful cooked mint flavoured beetroots, a Cox apple, chicken sticks that were not chicken but TVP I think, and the best of the lot. I’d boiled some potatoes the poured some light Soy Sauce over them and baked them for a bit with the sausage. Rated this one 9.44/10!

I carried out the BP tests as instructed. All over the place lately, up and down. I’m recording them on Excel so I can take a screenshot and email it to the doctors at the end of the week.

I suddenly felt so tired it was hard to understand why.

I didn’t feel unwell at all, just tired and drained.

Managed to get the washing up done, then sat down and irresistibly, I drifted off.

After a couple of hours, I woke thinking it was morning, but it was tea-time, then I drifted off again!

Sometime later I woke, needing the to use the porcelain. Little Inchy was bleeding, Haemorrhoid Harold was bleeding and I had to change togs yet again. Tsk!

Sister Jane rang (I think). I nodded off once more. An hour or so later I thought I heard the phone ringing, picked it up but no one there?

Another hour or so and I thought it rang again… then I realised that it was the doorbell chiming. The cleaning ladies had, as they usually do, altered the tune on the bell when they used the socket. By the time I got to the door, whoever it was that had tried at least twice to contact me, had long gone. Humph!

I still felt tired, but could then not get back to sleep. Put the TV on and started to watch a documentary about the war. Nodded off t the first commercial break.

Woke again (Around 0230hrs I think) and had to go back to the wetroom to tend to Little Inchy.

Back in the £300 second-hand recliner and off to sleep again and the many weird dreams.

Woke yet again, thinking it was light, and remembering I was to meet Pete, I hastened out of the chair and as I did, I recognised that the light I thought was morning dawning was from the TV that I’d left on, and it was actually 0500hrs. Oh dear me!