01:10hrs: I needed a wee-wee on waking up, after a night of not-a-lot of kipping. Mainly down to the Colin Cramps agony, and the repeated needs of the GPEB (Grey-Plastic-Emergency Bucket) throughout the flaming night! The Cramps were the worsed I have ever experienced. Fingers, feet, knees and legs, hands, etc. were all affected, and nastily! I missed taking the Magnesium tablet last night, that might have been the reason for Colin Cramps visitations? As for the wee-weeing, that continued for hours, repeatedly. Everyone was of the BOBSL (Blasting-Out-But-Short-Lived) mode. I’ve probably got an infection again. Back to the diary proper after that little moan. Sorry. 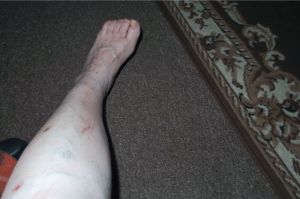 As I attempted to move the limbs, the Cramps returned with a viciousness. I’m sure that it bent the leg at one stage! I applied some more of the ineffective Fenbid-Forty pain gel. I think I must have used ¾ of the last tube overnight.

I got myself out of the Xyrophobia-suffering, zillionaire Brother-in-Law Pete damaged, £300, second-hand, near-dilapidated, gungy-beige coloured, c1968, sometimes working, £300, c1968, second-hand, rickety, rinky-dinked, rattling, rusty recliner. I grabbed the stick and went off to the kitchen to take the medications with extra pain-killers and take the belated Magnesium tablet. I had to, yet again, visiting the GPEB en route for the umpteenth BOBSL wee-wee!

I got the kettle on and moved the handwashing from last night to the airer. Made the tea and took the medications, and had to answer the summoning from the innards for the Porcelain Throne. The evacuation was plentiful, but once more, of a typical Diarrhorea Donald style, messy!

(I shall not mention the wee-wees again for a bit, but they seemed to be coming around every fifteen minutes, and all of the same GPEB mode.) Which is worrying, as they come on rather urgently! I had hoped to get out today for a stiff hobble. If things don’t change, this will be too risky. I’ll just put a (WW) in the text.

I made a start on updating yesterdays blog. Despite all the water leakages, I still had a hell of a thirst on me, and kept making brews all the time?

On one such trip to the kitchen, I had a Whoopsie and serendipitous luck at the same time. I’ll explain: I was taking the freshly washed and dried mug from the sink to the counter near the kettle – the leg burst into one of its imitations of a Neuropathic Schuhplattler dance, and I dropped the cup, which then (bear in mind it is a delicate China mug), hit the server tray shelf, and I ditched the walking stick in a forlorn effort to catch the receptacle, but was far too slow – and it bounced off of the tray, and landed straight in the waste bin, without touching the sides, which was full of screwed up kitchen towels from my drying off the draining board earlier. UNDAMAGED!

So, on the bright side, it was empty when I lost it, and somehow it didn’t get broken or even chipped as it bounced off the plastic tray and landed, almost gently, in the bin! Fair enough, I did stub the same poor-old toe again against the metal leg of the server, but with the nerve-ends playing up at that instant, I hardly felt a thing!  (WW)

That cheered me up a bit, and with all the people I met yesterday still in mind, Jenny, Joyce, the nurse, the window cleaner and partner, I perked up. I thought well if I can’t go out because of the risk of any leaks, it doesn’t matter, I’ll get caught up on the graphicalisationing.

Then as I returned to the diary work, the innards suddenly brast into a rumbling, grumbling with sharp stabbing pains! I should have known something like this would happen, it usually does. My good-luck standard is cataclysmal, ill-omened, or anathematised, but I’ve got used to it now. Haha! I anticipate another visit to the Porcelain Throne will be needed shortly. (WW)

I went on the WordPress Reader for a perusal. Some great stuff on it!

Back to the updating of the Thursday blog. Got it all finished off, then went on TFZer Facebooking.

Made a start of this post. Got myself in a mess, when the finger-ends began to lose their sense of touch. (Exasperated sigh released!)

(WW) I made yet another mug of tea and had some biscuits with it.

Ablutions needed, if I am to go out? The shaving produced just one tiny cut. The dropsies were rampant today: The soap (2). The flannel (2). The razor (3). The socks (4) The mouth-wash bottle. The toothpaste, the toothbrush, the drain-unblocker, the shower-head, the sock-glide and the kitchen towel roll! I had to get a move on, that may have been the reason for the multitudinous dropping of things? Too late to sort and take the black bags, as I did not want to miss the bus up to Mapperley Top.

Got things ready, and out and down the lift and walked through the link passages to Winthorpe Court.

In the expansive social room, I managed a natter with a couple of residents for a minute. Then moved outside to the bus stop. What a gang of Winwood

Heights tenants were there too! I enjoyed listening to their insults, put-downs, moans, laughs and general gossiping. Hehe!

The Nottingham bound bus came in behind the Bestwood L9. Most of the gang got on the first bus, I mounted the Nottingham bus, with a few of our clan. Malcolm and I got off about three

bus stops or so later, at the Sherwood Rise – Woodborough Road junction.

I made my way to the Aldi store. It was busy, but nobody ran into me with there trolleys, or shoved and barged me out of the way, or trod on my foot like they did last week! Tsk!

I dropped some things as I went round, as the fingertips went all nerve-unresponsive on me – luckily no glass jars or bottles, though. I got to the checkout and bought: Homestyle frozen chips. Citrus scented room spray. Some mini-BBQ flavoured pork pies. Vine tomatoes. Brunswick German smoked ham (two packs). “2×2 Sourdough baguettes, and two tins of garden peas. It was enough to force me to faffle-about at the checkout, getting the stuff in the bags. The young lady on the checkout was patient enough with me, the bloke in the queue behind me was not so understanding. Humph!

I paid, and moved away, to sort out the bags, heavy stuff in the wheeler, others in the carrier bag. When I got outside, the rain had stopped altogether.

I took a careful, steady hobble along Woodborough Road. Walking in a dream world and feeling so placid and calm, it concerned me. No worries, fretting or fears. I even stopped at the Haunted Museum, to take photos of its frontage. They had fitted some real-flame-looking old lanterns outside. The opening hours prevent me from visiting, cause I’d like to have done, but the 11:00hrs start is a little late for me. I’d probably fall asleep while going around the museum! Haha! 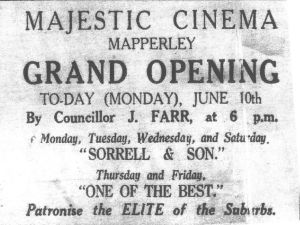 I later found this 1929 photo of the Grand Opening event for the original building, The Majestic Cinema!

I turned down the Mapperley Rise hill. Always a risk with this trolley, especially on the uneven pavements. Not only is it so steep, but today, there were many obstacles to overcome to get down to the flats. Oy Vey!

You can see how serrated, uneven, and prerupt the hill’s pavement is. I had a couple of occasions when I thought I might lose control of the three-wheeler. But with skill, efficiency, and pot-luck, I kept it perpendicularish. Smug-Mode-Adopted!

As I got onto level ground, I began to sing to myself, the mind went into Inductive-Reasoning mode for a while, as I pondered, but not for long, on the Brexit situation. Then, the mind reverted to its usual sort of blankness and state of voidness.

As I neared the people-less Winwood Heights flats, I decided to go up on Winwood Court’s roof to take some pictures.

I enjoyed the little photographic meander, out on the roof.

Back down in the lift, and hobbled on with the trolley and shopping along the persons-free link-passageway to Woodthorpe Court.

The fire-installation lads were using the elevators to transport equipment up and down.

Buy no bother to me, I was in no rush.

I go back into the flat, and still didn’t need a wee-wee?

I got the nosh bought put away.

Then got the black bags sorted out, and along with the box of recyclables, I departed the flat. Took three bags and deposited them down the waste chute, then down in the lift with the box. Frank got in the elevator on the way down, and we had a little nattering session. Steve, the caretaker, was in the lobby on the ground floor and took the box from me to save me going outside with it. Jolly-Good chap!

I returned up to the flat, and the wee-weeing started again! After the first one, they flowed regularly! Although not so frequent as they did earlier in the morning, I’m glad to say. This and all the following leakage maneuvres were of the BOBSL (Blasting-Out-But-Short-Lived) mode again.

I started to update this post. Inbetween wee-wees and making several mugs of tea. Why am so thirsty?

Got the nosh cooking and did the handwashing while the chips were in the oven.

Then prepared the Dagwood sandwich based, nosh. Which got a flavour-rating of 6.5/10. I could not eat it all, a lot went into the bin, but I enjoyed what I did eat. I wasn’t too struck on the mini BBQ flavoured pork pies, but they are okayish.

Washed the pots. Took the evening medications, and got down in the £300, second-hand, tatty, rickety, revoltingly-beige-coloured, recliner. Sleep, as usual lately, was resistant to come, but on the other hand, I stayed awake longer and watched some TV without the nodding-offs for a change.

Up for another (Wee-Wee), and back down… Ah, sleep!