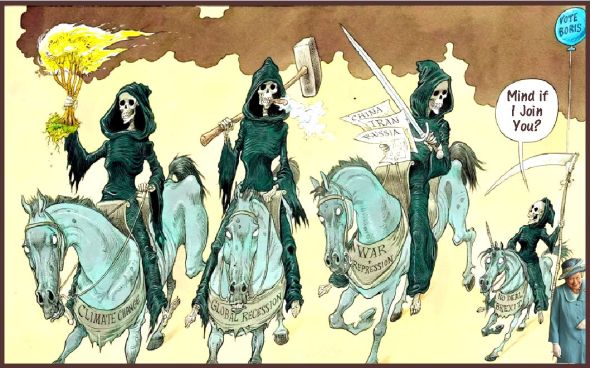 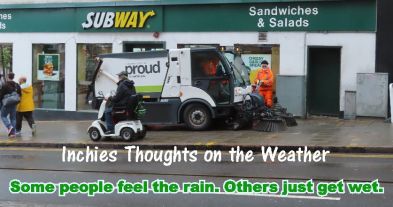 02:30hrs: I awoke, feeling thanks and appreciation that Colin Cramps had been a lot kinder and gentle with me last night. I still don’t know if the magnesium tablets helped, but I’ll continue to take them, just in case, and try not to miss one again. Boy, it was terrific getting six hours kip in, and no wake ups for wee-wees. Also, there were no signs of nocturnal nibbling having taken place! Smug-Mode-Adopted!

I extracted the lumbering flabby body from the Xyrophobia-suffering Brother-in-Law Pete damaged while he was flat-sitting, when I was in the Stroke Ward, and he fitted new CCTC cameras, and searched for my valuables, which he found and took, (I still haven’t got them back yet four-months later), £300, second-hand, near-dilapidated, gungy-beige coloured, c1968, sometimes working, uncomfortable, rickety, rinky-dinked, rattling, rusty, resurrected, reconditioned, recalcitrant, recidivating and rotting-away recliner. Had another USBUWSS (Ultra-Slow-But-Uncontrollable-Weak-Sprinkly) wee-wee.

I took the GPEB (Grey-Plastic-Emergency-Bucket) to the wet room for emptying and cleaning. Half-way through, the sudden urgent need to use the Porcelain Throne got me in a bit of a poorly-timed and messy pickle. I grabbed the stick to turn and deposit my more than adequately proportioned body on the Throne… Dropped the walkingstick, then the bucket onto the floor… Then I stubbed my toe on the sock-glide, and somehow I got to the WC seat on time! It was all over in seconds, and needed a good cleaning up after! The Porcelain and I were cleaned-up. Next, the walking stick, sock-glide, and GPEB had to be retrieved. And, just as I bent down to pick up the cane, the peripheral neuralgia ridden right leg, launched into one of its imitations of a Neuropathic Schuhplattler dance routine! I dropped the walking stick, which the curved handle bit landed straight dead on the stubbed toe, and I wanted to cry! Hahaha!

I cleaned up the floor, gently threw the sock-glide into the corner, as I cursed silently to myself, and took the bucket with me to the kitchen, for disinfecting! The semi-ersatz waking feeling of thanks and appreciation, faded fast! I got the handwashing moved onto the airer and hung. (WW!)

Took the medications, including the extra magnesium, Codeine 30g, and Loperamide anti-diarrhorea capsule. Made a brew (yes, the unaccountable thirst was still with me!) and got on the computer to update yesterday’s diary. There was not a lot to add, having sorted the photos last night, but fates-fickle-finger forced the fidgetting finger-ends to play up, and I lost a lot of time correcting and using silent curses!

Within about half-an-hour of being sat down, the annoying howling buzzing noise all over became louder. Then, as I stood up for a break fro making the cock-ups, and to go and make another cuppa, the RAI Rheumatoid Arthur Itis knees enjoyed giving me a lot of agonies, pain, and annoyance! They kept in this mode all day! Grumph, Oy Yey, and Grobbleackersticks! I had to use the bucket yet again, this time for an LRWS (Long-Reluctant-Weak-Sprinkly) wee-wee.

I made the brew, and sod-me, I had to return hastily to the Porcelain Throne! This evacuation was over even quicker than the first one was! However, it was not messy, at least. I took a couple of snaps of the morning view. But the hands and fingers were still a little shaky.

Back to the computerisationing. The finger-ends were no better, though. But, I pressed on and got the diary finished, at last, at long last. Phew!

I got the post sent off and went on the WordPress Reader, not a lot on there yet, weekend and all that, I suppose. Sent photos to Pinterest. Then I went on the TFZer YouTube site to catch-up.

Then the big job next. Getting the graphics made up for the page tops, etc., not an easy task, but what the heck!

Josie rang the door chimes, she could not get her heaters to come on. I checked what her meter sowed, and mine did the same. The selector on the panel on each heater, was not allowing me to make any changes? I could not find my stand-alone heater to let her borrow. Where that’s gone, I don’t know! Unless Pete took it when he stole my valuables. Hehe! I could not help her, and felt a right fool! 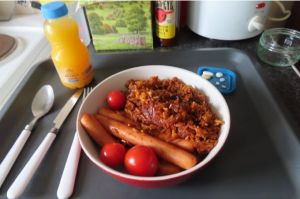 The weariness dawned suddenly. So, I got the nosh sorted out. An easy to prepare one tonight. BBQ seasoned rice and ready-to-eat-frankfurters added to the pan, a few tomatoes, with two little wholemeal cobs and a fresh orange drink. I did burn the rice a tad, but this was good, I like it this way. Tastier, palatable, and more scrumptious! Taste: 9/10! 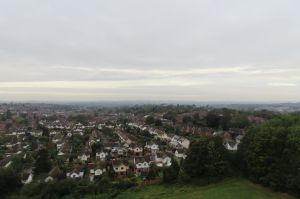 I was so tired, I did not wash the pots, but I did put them in the bowl to soak overnight.

The sky tonight had not got its red or blue glow at all. Shame, I was enjoying looking at this view/scene each evening. 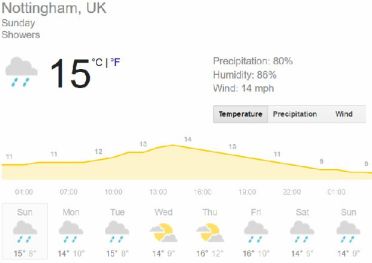 I went on Google to check out the weather forecast for Sunday. Ah, rain! A pity that, cause I was hoping to get out a bit and take some photos in Woodthorpe Grange Park. But with the threat of precipitationalisationing, I’d better not go out.

Mind you, tomorrow I might go through the link-passage to Winwood Court, and up in the lift to the roof level? I’ll see how I feel later, but how I am at the moment, who knows.

I did watch odd-minutes of TV, bits of a film, and many bits and pieces of Hells Kitchen, before getting off to sleep, thankfully!