01:35hrs: I woke up, but somewhat reluctantly this morning. For there were small imprints of a dream memory floating about in my electroencephalographically-challenged brain. I tried to access them without any success. All I could decipher was that I was enjoying the experience, but no details at all. Most aggranoying!

I surrendered to the impulse to get free of the xyrophobia-suffering Brother-in-Law Pete damaged, while he was flat-sitting. When I was in the Stroke Ward, and he fitted new CCTC cameras, and searched for my valuables, which he found and took, (I still haven’t got them back yet five-months later), recliner. Mainly due to the need for a wee-wee. I got up, slowly as the grogginess was lurking about in me again, and utilised the GPWWB (Grey-Plastic-Wee-Wee-Bucket). Which, incidentally, I find it so much easier nowadays, with using the four-pronged walking stick, it being stand-supportable and within reach, while I perform such activity.

It was of a disappointing PWWDIB (Pathetic-Weak-Why-Did-I-Bother) mode. And almost a best-guess job as to when it had finished! Tsk! Washed the dandies, and got the handwashing moved about on the airers. Put the kettle on, took the medications, and it was time for a Porcelain-Throne visit.

Off to the wet room, nervously expecting another massive evacuation and the system getting blocked up again, which is just what happened! But the proportions were even more substantial this time. How? Where from? How come it was gurgled away this time? Humph! At least the bleeding was only light, and it could have been messier, I suppose. 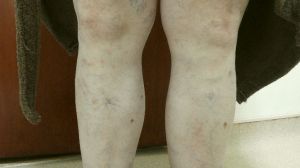 Had a good cleaning session and wash up after the evacuation. The legs I noticed, were a lot less pot-marked and not so affected by the Myasthenia gravis and Vasculitis, so, fewer lumps and growths are showing! Which is good, if an intermittent thing. But they are still somewhat bombycinous and pale, mind. 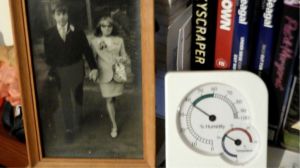 As I was taking the mug of tea to the computer desk, I noticed the readings on the Nottingham City Homes supplied for free, monitor thingy, was showing out of sync a smidge. It indicates that the heat is getting too high – well I can’t feel it? Humidity is in just off the green markings on the rankings. It’s cold to me, and the fog may be having an effect on the moisture.

I took a couple of shots from the unliked and unwanted new kitchen window, with its thick, light and view-blocking frames. The first one in Night Scene mode, and the second in Auto.

I got on with the Saturday post updating. It took about four hours to get all done and posted off. So many photos to get right, and the fingers with their Peripheral neuralgia and dysaesthesia problems, were making things increasingly worse for me when typing. I was spending more and more time correcting things. 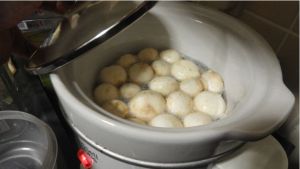 When it was done, I got the mushrooms in the crock-pot. Added some of the Puti vinegar and onion granules. I think I may have put in too much of these, though. Judging by how the picture looks in the dish? But, we’ll see later on when I taste one of them. A big day with cooking, I’ve got Josie’s to do first, and mine later on. I want to get the gals looking right. 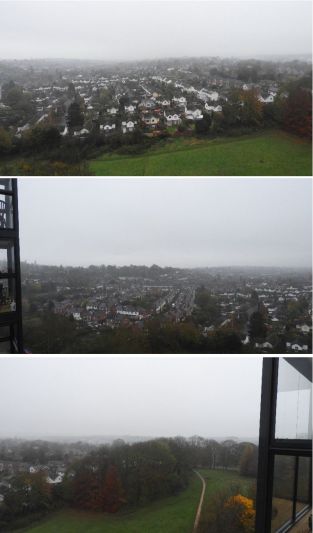 I’ve just realised, I think the droning, whining noise from outside, is getting a bit less now? But, maybe with all the coughing and blowing of the nose, what bit of hearing I’ve got left has temporarily been made worse?

I took three shots of outside again to show you the misty morning.

I went on the WordPress reader for a while, then went on the TFZer Facebook page, to try and catch up and put the newer pictures on the albums.

I set about making neighbour Josie’s dinner. Smoked haddock, tuna in mayonnaise, gherkins, tomatoes, cheesy mashed potatoes, a Limoncello dessert, lemon wakers and a gin & tonic. I took a photo of it as a last-minute thought – but realised much later, that the SD card was not in the camera! Grr! I got it all served up and the tray on the mobile server and delivered it tp her door. But no answerer. I waited about for ten minutes while the meal got colder, and Josie came in the hallway to the flats, she’d been doing her laundry. Still, she seemed content with the nosh. No time for a proper chinwag, else the fodder would have got too cold to eat.

I returned to the flat and completed the washing up. Heck of a job when I’ve made instant potato cheesies, they cling on to everything, forks, spoon, mixing bowl, Hehehe! But I mastered them in the end. Thoughts on what I might have for nosh came to mind, so I looked at what was available, and there was plenty to choose from. I opted for chips, bacon medallions, the rest of the peas and mushrooms. But, I could not cook chips and the bacon at the same time, so another thinking session. I opened a tin of potatoes and put it in with the mushrooms and peas, so now all I have to do is put the chips in. Cushty!

Did some updating on the diary, and went to check on the saucepan. All was okay.

I saw the cleaned empty jars on the side, ready for going down to the recycling bin. But sudden fatigue and weariness had arrived again.

I decided to turn off the computer and get the nosh ready before I flaked out. Haha! The thought of the pretty, highly desirable Polish phlebotomy nurse coming in the morning cheered me up a tad. 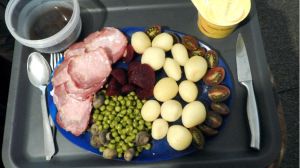 I stripped off the clothes and got into the jammies. Shattered! I got the meal prepared, and served up. Into the rickety-recliner and ate the nosh while watching the England v Kosovo match.

Which I didn’t last until half-time. 0-0 when I nodded off; and my hopes for this messy England side did not bode well. Imagine my surprise when I woke up in the morning and saw a 4-0 win for the three-lions!

But I must have needed the kip methinks, I’ve never fallen asleep during an England football match in my life, well, I have now! Shame-Faced-Mode-Adopted!