02:00hrs: I woke up well wanting a wee-wee. Wriggled my ghastly onerously bulky, but wobbly body from the depths of the £300, second-hand, none-working recliner, and with surprising dexterity, I shot off to the wet room (alright, hobbled precariously). The release was of the WOPT (Weak-Orange-Painful-Trickling) mode. (Indeed they were all of this style, all morning, and there were so many of them!)

The poor old uncut toes, nails, and feet looked more gnarled than ever. I swear when I raise my foot, even a few inches, there is pain from under the nails! And I’m forever catching them on something, which is like an electric shock? Tsk!

To the kitchen, and got the kett 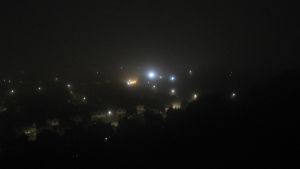 le on. I know it’s a little earlier than I’ve gotten up for a couple of days, but the mist seemed to be coming down already.

I got the sphygmomanometerisationing done and assembled the medications ready

to imbibe. All of the results were down vs yesterday. Including the temperature; that was at 79°c, one down on yesterdays.  No, that should be 79°f, surely. The pulse was ten points less. The Sys was five lower, and the Dia was two below. Better, methinks? Note the arithmophobia may mean I got something wrong.

Took the medications, with an extra painkiller, because Toothache Thomas was kicking off again.

Made a brew of Glengettie Gold, and put too much milk in it. So I used another tea bag to strengthen it a bit.

I got on Computer Cameron and went on the emails to check on the Morrison order. They have substituted Saver Garden Peas with Batchelor’s Mushy peas – and it looks like they are charging me for the more expensive unasked for ones? No Morrison Saver marrowfat peas, but they tell me they cannot deliver an alternative. Thank heavens for that. They may well have sent me a grilled Octopus with Ancho Chile Sauce & Noodle ready meal! But, at least they have sent the tissues for Jenny and Frank!

Then I made a start on updating the Sunday post. Finally, I got it finished and had to make some graphics for this diary. Then emailed the link, then went on TFZer and Windwood Heights Facebooking.

I went to make a brew of tea and took another view of the changing mist and fog. It’s getting a bit thicker now. But it didn’t feel too cold as I hung out of the anti-photographer designed, thick-framed, light, and view-blocking new window.

I may have had another Blank-Spell, I suppose. But I don’t think so. I can usually read things and know something had happened, not sure what, sometimes mind. But not this time. The actions were all there in the grey-cells. Which in itself is something to be thankful for! Hahaha! I think my brain cells are showing signs of senescence. 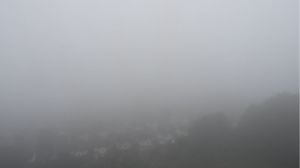 Ah-well, it’s time to get the ablutions sorted out. No showering, of course, the noise may disturb the slugabed neighbours. Hehehe!

Well, well, well, one of the bestest ever ablutionary session for months! (Apart from a toe-stubbing against the shower chair as I moved it!) Not a single dropsy of the toothbrush or paste, soap or razors. Smug-Mode-Instigated! But I could have done without the toe-stubbing bit.

I got the bags made up for the recycling and waste chute, but with the deliveries being expected, I shall not take them out until after both have been delivered. Don’t want to miss them. 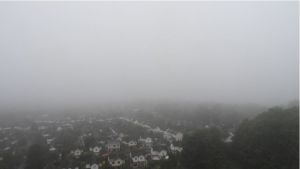 The mist is lifting a bit, I think?

O got on with this blog starting, and made a mug of Thompsons Punjana tea, much more of a bite to it than Glengettie Gold, but not as much as plain Glengettie. Confusing innit?

The intercom rang out, and I heard it well enough. T’was the much uptight Morrison delivery driver. With all the isolationists and their own worries about Coronavirus, this is only to be expected, the pressure on the lads and lasses much be extreme nowadays.

The lad left the bags near the door. I thanked him and slipped him a G&T. Off he raced.

Now, this is when my mood and physically improved status went down, ♫Way-Down!♫. On my first bend to collect a couple of the carriers, Back-Pain-Brenda gave me shocks of pains that have not cleared up yet (three-hours later!) Every slight bend or twist in the torso, brings forth knife-like stabbing pains I could do well without! I dare not take any more pain-killers, having already taken one extra to counter Toothache Thomas! Grunglegrogs!

Gingerly, I got the bags into the kitchen one at a time. Sorted out the tissues for Jenny, then got the other stuff checked and put away. It took me a lot of time, at one point I got down to put the chips in the freezer, and the back pain was so bad, I had to stay in that position for a while, and wait for it to ease-off before I dare get back upright again. Hey-ho! Got it all sorted, in the end. And back to Computer Cameron.

The Amazon folks had sent another email with a revised ETA.

I pressed on with doing this diary. Until at least I thought that I needed the Porcelain Throne activities.

But no! I sat there for ages, doing my best to encourage the evacuation.

I had a go at the crossword puzzle. (I got a couple solved as well. Mind you, I was at it for ages, but no signs of any movement)

Not doing a lot of anything, I noticed the legs were an odd shade this morning. I didn’t see it earlier? When it came to standing up, I was wary of not catching the toes on anything. Anyroad, the pins may be a bit blotchier and anaemic. Still, the Clopidogrel allergy lumps, the spider veins, and the Thrombophlebitis give them an appearance, that Tim Price thought, some Art Gallery would like to display. Hahaha! I think the odd colouring in the leg picture, is down to my lack of photographic skills, in reality, they were not so vivid.

Moved onto CorelDrawing. Managed to get a few graphics done.

acker. The progress graph has no moved at all, and the ETS has changed to a little later. Oh, dearie me! Fingers crossed.

Intercom, Amazon delivery. Got the flaky biscuits ready with the tissues near the front door. I was meaning to slip a masherina (facemask) on, before opening the doors, but forgot to. Humph!

Getting Shaking Shaun, joining in with the back pain. Then sudden fatigue came over me.

Jenny emailed, then later rang me, but I could not hear her, the line was terrible. I tried four or five times to ring her on the landline, but it was engaged.

Frank came up with the bleach and yogho

urts for me and collected the bags from me. I still had the shakes going a bit ferociously.

Got some nosh prepared. And got down to eat it, with designs on getting to sleep soon. Hahaha! Fool!