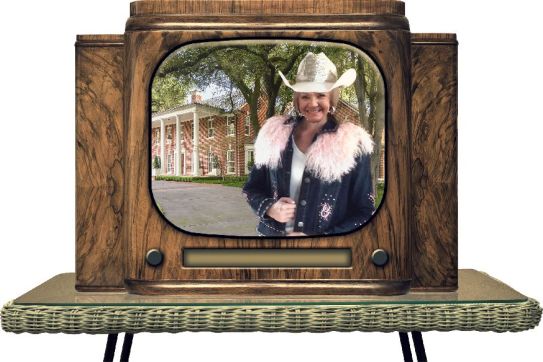 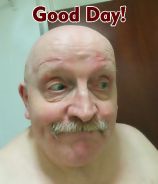 03:30hrs: I woke up, requiring the traditional wee-wee. But for some reason, the Porcelain Throne was not needed.

I rose from the semi-comfortable, £300, second-hand, rickety, none-working, rusty, and spew-promptingly-beige-coloured, c1968, recliner, without any undue trouble. Grabbed the stick, and made my way to the GPEB (Grey-Plastic-Emergency-Bucket), and took a WOPT (Weak-Orange-Painful-Trickling) mode wee-wee. It still amazes me sometimes, for the bucket had been well-used overnight, yet I cannot remember using it once? Considering the pain and effort that I need to get up, the stick to get to the bucket, then back down into the seat again, I find this bemusing? Can some neuropharmacologist, or psychoanalyst (or whichever word I should have used) out there, explain this for me, please? I can’t recall if this used to happen before I had the stroke, but I think it occasionally did. Nowadays, it’s a regular phenomenon. Just thought I’d ask, like. Sorry.

I took the bucket to be emptied, cleaned and sanitised. Washed the hands and contact points, and off to the kitchen to make a mug of Thompsons Punjana tea, and excellently flavoursome it was! Mind you, making the brew, and Nicodemus’s Neurotransmitters let me down, again at just the wrong time! I spilt the hot tea, and naturally, it went on the biggest nearby target available, my stomach! Niggleclump!

Through the unwanted and unliked new kitchen, my favourite room, window. (Hahaha!) I tried to take a photo of the morning view. But, it came out so different from what the eye saw in the viewer? I used the night panorama option, on the Nikon? 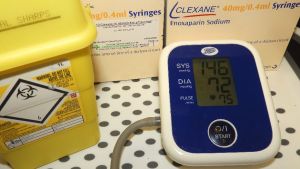 I must find time to sort out the medicine drawers. The health Check results were much better this morning, apart from the temperature, at 61.8°f, low I think. The SYS, Dia and Pulse all looked well within the range permitted for a grumpy old fogey?

I got the brew made, and off to get Computer Cameron going.

The timing of Nicodemus and Shoulder-Shuddering-Shirley was annoying. The moment I started typing, they both kicked off! Even Saccades Sandra had a bash at me! But not for too long. I found a determination and concentration from somewhere and pressed on, ever-correcting mistakes, I’ve likely missed some I suppose. Eventually, I was so glad to get the updating finished, hours later, naturally.

I nipped (talking loosely), to the wet room, as I felt a little discomfort from the innards, and did not want to risk any more embarrassing incidents, so, off to the Porcelain Throne. What a life when yer grows older and get iller! Haha! But apart from an excessively large amount of wind escaping from the innards (quiet musical, too!), there were no signs of any evacuation! I even spent a while on the crossword book, just in case anything happened belatedly. Nope, nothing did!

Back to the computer. Emailed the link off. Then went on WordPress Reader. Followed by Facebooking. Then, I made up a template for tomorrow’s blog.

Herbert’s having a bash at his modelling methinks. I’d love to know what it is he’s making.

I nearly missed the Priority Iceland order spot. Got an order in, just in time. Phew! Got some different fish ordered for Josie to try this week. And, some shoulder pork to try and cook in the crock-pot.

I went to make another brew, feeling guilty, I haven’t got the ablutions done yet. Scallywag!

There seemed to be a green hue in the air now? I took a snap form the unwanted, unliked, dangerous kitchen windows, of the frontal view.

Then, I got the old Lumix camera and tried to take a rolling shot, of Chestnut Walk, below. But I failed, as I expected I would. I just can’t keep the camera still enough to scan with. I’ve tried on all three cameras now, but I failed on every effort. Sad innit? The danged Peripheral Neuropathy is to blame. Broggleknockersworth! Still, the green hue, or the Lumix camera giving everything a green tinge, was refreshing. Lenny Lumix is like me, getting on a bit, and certain parts of it, are not working right nowadays. Hahaha!

I went onto CorelDraw then, to get a few graphics done, I’m getting low on them for the TFZers, now.

Aha, the mobile shop as arrived. Back in a bit, folks. Nipped down and managed a natter with Flo, Josie and Roy, but the bloke had only got one tin of garden peas left, no tomatoes, no bread and no milk in stock! Josie was going to struggle with no milk, but fortunately, I had a carton of long life semi-skinned in emergency stock in the flat. I went up first and got it out and took it for Josie to have.

Brought in my one tin of garden peas, half a cucumber, tin of stewed steak and an ice-cream cornet. Humph!

Got the nosh sorted out. Not one of my betterer efforts. The battered fish I let overcook a smidge. An overall flavour rating of 6.5/10.

Then, the Diabetes insipidus boosted the wee-weeing, and almost none stop piddling was required, every one of them with Post Micturition Dribble (PMD).  By morning, I used eight pairs of PP’s! Flipping good luck that my mate Michael had supplied me with ample reserves! Thanks, Michael! Hope you’re coping out there, mate?

I needed so many, not just for the after-dribble, but all the over-use of Little Inchy had started the fungal lesion bleeding.

Watching the TV was not on, I had to climb out of the recliner – use the emergency bucket and back down repeatedly. And the EOGPB (Emergency-Overnight-Grey-Plastic-Bucket) needed emptying and sanitising to get me through.

The worst night for months!