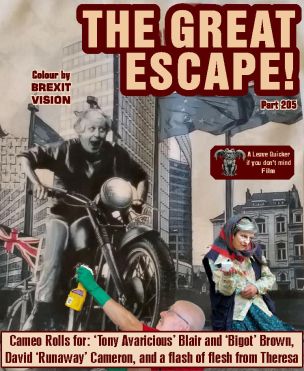 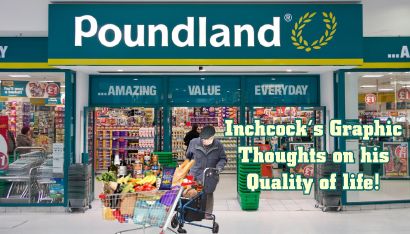 03:00hrs: I stirred, and blenched the moment I tried to move. By Jiminy, RAI (Rheumatoid Arthur Itis) was giving me so much bother in the knees. To be expected, mind, with yesterday’s Accifauxpas! I laid there a while, to praise the NCH gals, who rescued me from the floor.

With difficulty and throes of pain, I managed to rise from the Brother-in-Law Pete damaged while he was flat-sitting, when I was in hospital, as he fitted new CCTC cameras, and searched for my valuables, which he found and took, (I still haven’t got them back yet four-months later), £300, second-hand, near-dilapidated, gungy-beige coloured, c1968, sometimes working but not today, recliner. Within a few paces, the knees began to free up, which was surprising, and very welcome! They still hurt, but nowhere near as much as when I woke up. (Could this be a betterer day in the offing? Haha!) I got the handwashing onto the airer. Had an INHBT (I-needn’t-have-bothered-trickling) wee-wee. Took the medications. Made a brew, And off to the Porcelain Throne.

At last, success! It took a lot of discomforts, the crossword book while struggling, and finally, the colossal evacuation was achieved! Some bleeding, and a lot of soreness, as was to be expected. The innards slowly but perceivably lightened, and the tightness of the diaphragm eased off. I heaved a sigh of relief!

I got the computer on to update the Thursday blog. Got it done in a couple of hours and sent off to WordPress. The internet was not playing up, and the finger-ends, not much dancing at all, and kept their sensitivity-nerves working all the way through. Smugness! Then went on the WP Reader section.

Made a start on this diary then. After another couple of hours, I went to make a brew.

The colouring of the sky prompted me to take this picture, through the unwanted, light and view-blocking, thick-framed kitchen window- those with the glass that cannot be reached for cleaning. A shame really, after all that money

that Nottingham City Homes has invested.

As I made the tea, I wondered how I would use the tomato-cutter on the Bull tomato? Hehe!

I must try to get caught up a bit on the TFZer Facebooking: I’m so far behind, it worries me. So, I went on to update the photo albums.

Just getting the photographs on, took me well beyond leaving time for me to get the ablutions done in time to catch the bus! I must get out to buy the potatoes for Josie’s Sunday cheesy-nosh! Then…

So I’ll catch the next bus – which of course, will mean by the time I get back, all done-in and tired, there won’t be time to get any more computer work done. Oh, life takes so long nowadays. Hehe!

Better get a rushed ablutionalisationing session one! Fingers crossed, I can get it done in time to get the 10:30hr L9 bus! Grumph!

Well, one hell of a Porcelain Throne session interrupted the ablutions. Never before has such a large-sized release taken place! Not only did I bleed, and was painfully stretched a good bit, but the flaming WC was clogged-up, as it could not cope with the volume! A right messy job cleaning up myself, and a worse situation unblocking the cistern! I hope I have, anyway. A good job I had the shower afterwards. The dropsies were many-fold. Unblocker bottle, pipe-hook, toothbrush, razor (3), flannel (2), shower-head, sock-glide, and ear-wax remover bottle! I hope the WC will work and cope with the next Porcelain Throne’s usage! Hoping for the best mode, engaged!

I readied myself, made umpteen checks on doors, taps, have I got this or that with me, lights, cooker etcetera, and departed on my mission to get the potatoes for Josie’s Sunday nosh. I took black bags to the chute, and down and handed in the large bag of recyclables to the caretaker.

I arrived at Cat-Walk models Wardens, Generalfeldmarschalless Deana and Obersturmführeress’s holding-cell office. They were busy, so handed the nibble bag around, and said I was off up to the top floor to take some photos, which I did. I used the wrong lift: I should have used the dedicated one. Tsk! Still, I took some decentish pictures, including these of the new felt roof leaking! I showed the photos to Oberscharführer Warden and Belly-Dancer Deana on the way down. She knew about it, though.

Out and to the bus stop. Where a jolly-good chinwagging session was enjoyed.

I mounted the Arnold bound L9, and was soon dropping off on High Street… almost literally! Two ladies had to assist me as the trolley went over as I alighted. I’m liking all these ladies helping me I’m having lately, Haha! I walked over the crossing, chatting to one of the women, and made for Arnold flea market and the potato stall. To my amazement, they had some fresh garden peas in stock. I got 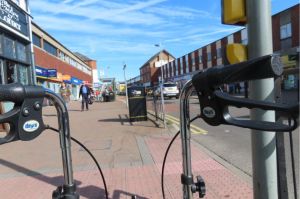 five baking potatoes for £2, and 2lb of peas for £3. Then, I walked to the Saver store, where I got some drain-unblocker, two bottles of, and a can of Erasmus shaving cream.

Next, I was off to the Asda (Walmart) store. I had a long slow poddle about, and stupidly came out with far too much shopping again, considering the trolley was already filled up with the potatoes, peas, drain-unblocker and shaving cream! What a Schnook I am! I had to buy another heavy-duty shopping bag, to cope with the purchaser, that was: 2 tins Chilli-con-carne, 2 beef-pasty slices, a bar of the new Cadbury dark milk chocolate, Dutch vine tomatoes, Asda bacon flavoured fries (chips), and a bag of six little wholemeal cobs, that were ready sliced. (These will just about fit in the freezer with the chips). I resorted the bags out, to try and get the heavy stuff in the pathetically small trolley bag.

But still ended up with an extra heavy bag, that threatened to have me over a few times on steep pathway to the bus stop.

I had to stop near the top as I passed by the car park, to take a shot of this better than average shot of the incredible sky.

The bus soon arrived. I enjoyed a natter with an unknown and nice lady en route. And was quickly carried back at Winwood Heights! 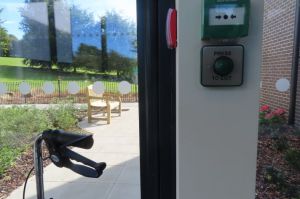 I took the route through the link-passage into the Winwood Court. The exit door was still not opening.

interrogation cell. Deana said it does work; she used it yesterday. We went to check. And the green press button, which is identical as all the other link-tunnel doors, but this door only needs pushing after pressing the knob, and doesn’t 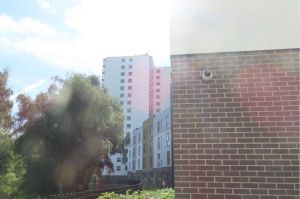 open automatically like all the other ones do! I wish someone had told me earlier! I did feel a fool!

I took a few photographicalisations of outside. It looks like a suitable place to sit quietly, indeed

next door but one neighbour, Malcolm, was in his shorts and asleep out there, doing his best to get skin cancer.

I made my way to the flat, and checked first thing, on the toilet bowl.

Oh no! Some erm… regurgitated content, was showing again in the bowl. I put a bottle of the drain-unblocker I’d bought, down the loo and left it to do its job. I may have cried, a little. Always at the damned weekends do we have problems, and with the Mr Fries crappy Virgin Internet going down every weekend, I was not in a good mood like I was earlier in the day! Sob!

Washed up well, and got the fodder and the bought products away.

I shelled some peas and got them in the saucepan. I nibbled few and found many of the pods had fur-growth inside, so took care not to add them to the pan, I just dished them. Can’t complain, it is so late in the season for them. Although the few I nibbled while podding, determined that I did not need to add any demerara sugar, they were sweet enough.

I got the chips in the heated oven and will add the beef pasty later, so they are both cooked at the same time Hopefully

Then, back to the wet room. Got the rubber glove on, and investigated the situation in the WC bowl! I pulled the chain, well, twisted the handle, and to my amazement, things were all cleared! But, knowing my luck, I resisted any feelings of confidence or contentment. I’ll see how things go on the next usage. Washed the dandies, and myself, stripped-off, and got the handwashing done, just in time for the meal finishing cooking. I put the sliced brown cobs in the freezer.

Tomato sarnies, fresh peas, beef pasties and the bacon flavoured fries. Accifauxpas with the salt pot though! I was putting some salt on the chips and tomatoes, and the spout fell off of it! Still, a decent nosh, although the beef pasty was undercooked, so most of it was left uneaten. Shame! I did enjoy what I did eat, though. 7.8/10, taste!

I tried some pieces of the new Cadbury’s Dark Milk chocolate. Horrible, sickly sweet crap! I shan’t be trying that again!

I’d no sooner got settled in the Brother-in-Law Pete damaged, £300, second-hand, near-dilapidated, gungy-beige coloured, c1968, sometimes working recliner, and a sudden eruption from the innards forced me to get back out of the chair and make for the Porcelain Throne. But it was a false alarm. Nothing moved, despite my belief that something wanted to, and my strenuous efforts to accommodate this. Tsk!

I must have had dozens of nod-offs of a few minutes duration. Waking each time and staring blankly at the TV screen with heavy eye-lids.

It was late, nearly midnight I think before I eventually got off into dreamland!