01:50hrs: I stirred into imitation life, and lay for a while in the Xyrophobia-suffering Brother-in-Law Pete damaged while he was flat-sitting, when I was in the Stroke Ward, and he fitted new CCTC cameras, and searched for my valuables, which he found and took, (I still haven’t got them back yet four-months, no, five-months now), £300, second-hand, near-dilapidated, gungy-beige coloured, c1968, sometimes working, uncomfortable, rickety, rinky-dinked, rattling, rusty, resurrected, reconditioned, recalcitrant, recidivating and rotting-away recliner, and mused over this and that. After the morning’s usual uncontrollable mind-blasts of fear, worries and concerns had finished, I regained semi-control of the brain and considered a few things that had been nagging away at my grey-cells.

Is the balcony safe? The holes are only small, but bits of concrete or cement have fallen from the roof… I was annoyed at the mail being delivered to Josie’s flat in error, and with her being on holiday it meant the Warfarin INR test results, and the Warfarin Alert wristlet (which only had one in, not two, as paid for) anyway, caused hassle with them not believing me that they had not arrived… but these minor, almost anticipated and expected tribulations were soon forgotten about; when the need for the Porcelain Throne arrived.

Up and out of the recliner with amazing ease this morning, apart from RAI (Rheumatoid Arthur Itis) in the knees, and a bit of jerking from the right arm, fingers and shoulder; there was no bother from Dizzy Dennis, Anne Gyna, Tight Chest Charlie, Haemorrhoid Harold, Duodenal Donald, Reflux Roger, Back-Pain-Brenda, Karl’s Kidneys, the plastic ticker, Colin Cramp or owt else, which was surreal to me! (Had I died and not noticed? Hehehe!)

En route, I had to use the GPEB (Grey-Plastic-Emergency Bucket) for an SSAO (Short-Sharp-All-Over) wee-wee. I got on the Throne, and that was another ‘Sit, splunge, all-done’ session. The second in a row, which I found almost pleasant after the Colin Constipation of the previous few days. I anticipate that shortly, Diarrhorea Donald will return. Tsk!

Washed up and hobbled to the kitchen. Moved the handwashing onto the airer. Took the medications, and made up some black bags for the chute later, and replaced new bags into the bins.

It was raining outside, I opened the unwanted, disliked, thick-framed, light & View-blocking kitchen window, with the panes that cannot be reached for cleaning, and it rained inside! Hehe! All over the camera, the counter and floor, and me and the jammie-bottoms!

I took two snaps quickly, so as to keep the Canon camera from getting damaged in the precipitation. Not good quality, but still.

I got the computer going, and concentrated on getting the Saturday diary update done and dusted. (In between several more wee-wees, all of the SSAO variety)  It didn’t take too long this morning, despite the peripheral neuralgia caused hand-shaking and fingers jumping about. There were precious few photographs to go in it.

I went on the Emails next. A lovely one from Jenny, telling me she was going to report the holes in the gallery top for me. Bless her, she is kind to me ♥!

Then, rather worryingly, back to the Porcelain Throne! Ah, as I suspected, this session was far less solidified. But, no bleeding, and it was not too messy. Obviously, no time to do any crosswording. I washed the hands and rubbed some Phorpain Gel in the knees. Which appeared to be looking slightly knobblier, knottier, and lumpier, to me anyway? But again, no bleeding anywhere. All Good!

I made another brew, this time Glengettie. Then checked on the Morrison order to see if I’d remembered to get some black bean sauce. Yes, done it. (Smug-Mode-Engaged!)

To the Word-Press Reader section. I then went on the TFZer Facebook site. Many hours, and three more SSAO wee-wees later, I made another mug of tea. And decided for a change, to have some breakfast, but what?

Due to my aboulomania, fluctuating, wavering, equivocating, and pathological indecisiveness, and the dropping the box of corn flakes that spread out all over the kitchen floor, I opted for a pot noodle and a cuppa. Tsk!

0910hrs: Off to get the ablutions sorted, a lot of shaking from the hands and fingers, so this might well prove an interesting scrub-up session. I got the bandages, antiseptic, after-shave and plasters at hand, ready. Haha!

Well, only two dropsies during the ablutionalisationing. No Accifauxpas, unless you want to count a few scratches with the razor. Afterwards, I decided after two failed attempts at getting the socks to fit into the glide, that the solution would be for me not to wear any! Hehehe! Where there’s a Will (there’s a Way) Will Hay memories flooded back! Another comedy genius along with Spike Milligan, nothing like each other, but both great entertainers! 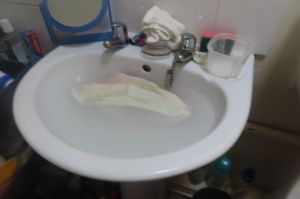 Then, I departed, hung the towel to dry, turned off the shower at the mains box, then realised I had left the alert bracelet in the wet room, and returned to collect it – just as well! For I had not shut off the hot water tap in the sink properly, and I’d left two cloths in to soak and freshen. The water was going down the overflow. I pulled out the plug, moved the flannels, and the water did not drain at all! Damned blocked again! I put some drain-unblocker down and left it for ten minutes, returned, and the water was going down slowly. Of course, this meant the hot water was not as hot as it should be, now. Tsk!

I  set out to make Josie’s cheesy potato meal. Got the spud out and chopped and mashed with some Leicester Cheese, butter, onion salt and a splash of vinegar. Gave it some hammer in the mixing stakes, put the peas in the saucepan… and the landline rang! It was Sister Jane. I nipped back to check on the pot, all the time the potatoes getting colder and so, much harder to mash. Jane and I had a natter and laugh. Brother-in-Law Pete, who broke the £300, c1968, second-hand recliner when he was flat-sitting, when I was in the Stroke Ward, and he fitted new CCTC cameras and searched for my valuables, which he found and took, (I still haven’t got them back yet four-months later), say’s they are too heavy to carry, but must be the same weight as when he purloined them in the first place. (Hehehe!) Anyway, the lad is to have a PSA test, or maybe that should be, he had a PSA test.

I got on with Josie’s meal, I like to keep to a schedule of delivering it at 12:00hrs each Sunday. Not that she can remember, bless her. Although, when she woke me to hand me wrongly delivered mail last night, I reminded her of today’s nosh and asked if it was alright to bring it at the usual time, midday. She agreed. But that didn’t stop her forgetting and being pleasantly surprised when I arrived with the nosh. I’d made her Tuna with beetroot and mayonnaise, garden peas, tomatoes, sweet lettuce and the famous cheesy potatoes! Hope she enjoys it, and remembers this time, not to return the plate, tray and cutlery today. She might recall I will be in bed this week, I hope. Every week I’ve done her a meal, she’s woke me up! Hehe! Don’t know why I’m laughing? But it’s better than crying, innit.

I found details of the PSA test and levels and emailed the link to Pete and Jane.

Then got on the computer to update this blog… and:

I was about to give up on the computer, too much hassle, it was dead slow. Then: 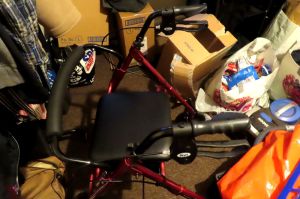 I went in the Steptoe & Son spare room, with the intention of moving the four-wheeled trolley on the balcony with the new three-wheeler.

But, I lost my balance stepping over it and tumbled to the floor. As luck would have it, and I was lucky, I fell on box’s of the PPs, that broke my fall. And, had the trolley with the brakes on, to help myself back semi-perpendicular! Smug-Mode-Adopted! Mind you, I think a couple of new bruises might come up on the legs.

Not feeling up to much now, not ill-like, just, erm… what’s the word, er… Fragile. Hehehe! I think I’ll get my nosh ready… no, I won’t, I’ll shut everything down and sit down with a cuppa, and pray for sleep!

And it came. Ah, blissful! But the damned landline rang and flashed, waking me from my beloved and much-needed slumber. It was some con-persons telling me my BT internet (Again!) is about to go down, and where I can get put through to talk to someone who can help me! I left a verbal message, ‘Go forth & multiply’ was the general wording.

Now I’d been disturbed, I made some nosh for myself. But, I must have been half-asleep and made the biggest hash of cooking ever! I could eat very little of it. I can’t recall taking any of these photographs?

The Sourdough baguette was not fully cooked, nor the chips either for that matter. I probably shouldn’t have, but I ate some of the Cumberland sausage Sourdough baguette sarnies. I hope eating them doesn’t come back at me with a vengeance innards-wise later. Oh, heck!

I got the pots washed and took the medications with me back to the recliner. Frustratingly, sleep did not come. I turned on the TV, and in a short time, was back in my beloved comatose state, dreaming happily, of a past love…

The flat door chimes rang out, several times by the time I got to the door. It was Josie, returning the plates and accoutrements from the meal. She said she’d enjoyed the meal, and I said I’d like to meet her in the week sometime, we might go on the Winwood Cort rooftop, have drink and natter, and she could tell me all about her holiday. No response from the gal, I don’t think she could hear or lip-read me. Anyroad, she was happy and smiling as she went back to her flat opposite, so I was also happy and smiling as I bade her farewell, as she departed.

I really didn’t know where I was. Hahaha! I’d been woken up so often. I put the plate etc. in the kitchen, made another brew, had a wee-wee, took a photo of the rain, and returned to the recliner.

It was still lightish outside, this made me think about checking on the clock-changing times in the morning. Which I did. The clocks go back at 2.00am on 27 October 2019 – for future reference, it always takes place on the last Sunday in October. This signals the end of BST, or Daylight Saving Time (DST) and means the UK will revert to Greenwich Mean Time) I wonder why after so many years, I have to keep checking every time? Perhaps, dotage, caducity, degeneration, senility, senescence, enfeeblement or just waiting and coffin-seeking in the latter part of animate life? (Hahaha!)

Head down yet again, this time, the blessed long-awaited slumber was achieved!