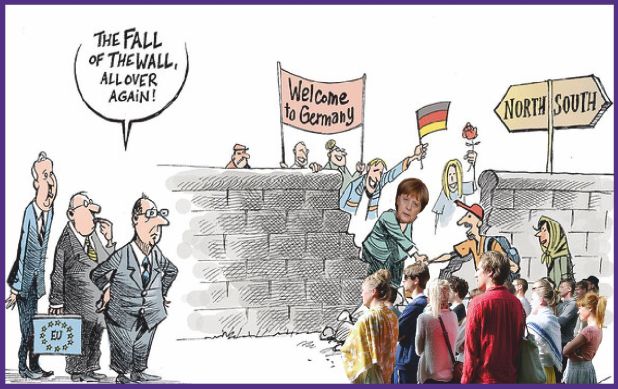 2350 hrs: I woke up with a bit of a start, the head in a spin and struggling to grasp what needed doing today. I remembered the Asda fodder was to arrive, (but I had to look-up later at what time, 0700>0800hrs) and the hospital visit… then, the mind had to concentrate on getting me to the Porcelain Throne on time! Passing the empty orange juice bottles, cheese curl packets, and the crumbs on the £300 second-hand recliner and carpet near to the Ottoman. Schlemiel!

The evacuation was slightly cringe-making, uneasy and messy. Prevented my gaining any degree of serenity of the mind. Still, I got a few pages of the ‘Catastrophy’ book read. As if the brain wasn’t already vagarious enough, struggling to cope, now I input more knowledge I don’t need for the grey-cells to get confused and mystified over! Idiot!

Little Inchies lesion had been bleeding a lot while I was asleep. Not comfortable cleaning things up when they had congealed, but I managed with the odd ‘Ooh’ and ‘Ohohoh’ being muttered. At one stage, I think an ‘Argh!’ slipped out. It is vital that I clear all signs of any sanguineous from the fungal lesion, to try to avoid the medics halting the procedure later on. Changed the PP’s and applied some Daktacort cream. Harold’s Haemorrhoids were not bleeding at all. Just on the day that I’m going in to have them strangulated, this happens! I don’t know if it is a good or bad thing, though?

Apart from Inchies Fungal Lesion, physically, I was feeling good. Anne Gyna, Arthur Itis, Hernia Harold, Dizzy Dennis, Shaking Shaun, Duodenal Donald, Back-Pain-Brenda, Metal-Ticker-Thomas, the Plates-of-meat, and DVT Theresa were all being so kind to me, I found it hard to believe, but appreciated the situation all the same. If only the mind would be as sympathetic to me. Bonkersness approacheth? Hehehe!

I set about doing the Health Checks. 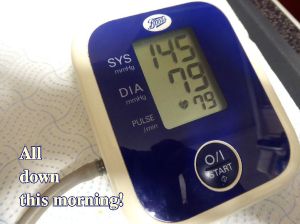 Well, well, well, fancy that. The Sys and Dia have come down well this morning, and also the temperature.

And, as well as and besides that, the sphygmomanometer worked the first time! If only the mind would do the same. Haha!

Made a brew and took the medications. Remembering not to eat anything as instructed.

I updated and finished the Tuesday Diary then got it posted off. Went on the WordPress Reader section.

When I went to make another brew of tea, I noticed that the flat was looking a little tatty and unkempt. I hope to have a bash at cleaning it up a bit when I get the procedure sorted.

Back to the computer and I heard a noise coming from somewhere in the flat. I jumped up (well, alright, struggled out of the chair) and went to investigate.

In the kitchen I found stuff had fallen off of the sink side; things that should not have been there if I’d kept the place tidy as normal. Klutz! There was a bottle of bleach, a washing-up liquid bottle and a bowl that had fallen off and landed around the bag of hospital things I have to take with me later. Luckily, there was no leakage.

However, when I checked out the bag, the shaving foam had been releasing some of its foam and soaked a towel. So, I swapped the towel for another one. Tsk! Good job I noticed really.

I started this blog going up to here. Then had an idea for a Political Funny graphic as a diary header, and went on CorelDraw to make a start of designing it while the idea was fresh in the head.

Ablutions were carried out without any shaving cuts. The medicalisationing of the fungal lesion, although not exactly a success, was not too painful this time.

I collated the black bags to go down the chute, gathered the recycling bag and hospital bag, and departed. Took the black waste to the chute. Got to the lift, it arrived, and I realised I had not heard the ‘Ping’.

Back to the flat to get the hearing aids. Humph! Back to the lift. Not feeling so bad really, as I was feeling a mite holier-than-though, about getting all the things needed for the procedure, and remembering the timing, etc. Also, I had time to meet Cissy in town, and Paul was to arrive to pick us up to lift me to the hospital. All was going well, I thought.

I plodded down and put the bag for there cycling near the caretakers door, and off to the Nottingham City Homes, Winwood Heights, Hauptbereitschaftsleiteress Wardens Temporary HQ, Willmott-Dixon workers breakfast and tea-break room, Sarcasm & Insult distribution area, Tenants Socialisation Shed, Telling Inchcock off Zone, Things like china and pottery to be stolen from, and somewhere to rest while waiting for the bus, shed.
I was first in the room this morning, and it soon filled up with many others, and chinwags of mammoth proportions followed.

The bus arrived, and I got the crossword book out and had a reasonably successful go at it en route.

In town, I got off at the terminus on King Street, and took this photograph, thinking it might come out a ‘Moody’ one.

Walked down and met Cissy in the slab square.

This is where the start of my Mega Whoopsiedangleplop began to take fruit! Cissy heard my mobile ringing and informed me. I got it out and answered it in time, but could not make out what the lady was saying, so again Cis took charge and spoke for me.

As I watched her turn the call off minutes later, her confoundedly serious Tut-Tutting began. She explained: That was the hospital confirming the appointment is still on for the procedure. FOR NEXT WEDNESDAY at 0830hrs! As she said this, shame and utter self-disapproval flowed out as I now remembered the time and date being changed last week! 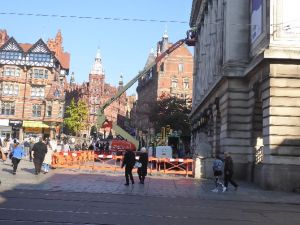 I think she felt sorry for me a bit. Paul arrived and laughed his head-off almost, but Cissy was a little annoyed with me as well. They departed, and I was in a right state mentally after they had left. I’m not sure where I went until I was aware that I was on the Poundland store, filling up the shopping basket. But I found this photo later that I could not recall taking?

Resigned to my failure, well, almost, I carried on shopping and think I got some bargains. Christmas chocolates (Liqueurs) for the other tenants. Social Hour Prizes and nibble box biscuits.  Zoflora Citrus disinfectant, ham off-cuts, cheeselets, bird food for the ducks, and a Pork Farm pork pie.

I popped along to the Marks & Spencers Food Hall. Spent on more unneeded fodder. I think the cock-up I’d made affected my minds balance? Haha! Anyway, I got a sliced Sourdough Stonebake loaf. Shortie biscuits, shelled peas and sliced mushrooms.

I do remember taking this photo of the Little John Tower Dome, and thinking how cloudless the sky was.

I looked this up late on the Cosmopolitan page on the web, it said: From early October, stargazers will be treated to a spectacular display of shooting stars as Halley’s Comet returns to Earth. Just thought I’d mention it.

I caught the L9 bus and Elizabeth, and Cindy got on. After telling them earlier about my procedure being today, I proceeded to make myself look a right fool, by explaining cock-up with the dates. I felt a right Plonker!

Still, they were kind really, as they told me I was a nitwit or something like that! Hehehe!

The sky remained clear of any clouds, and despite the sun, I sensed it was going to get cold tonight.

A little after taking this picture, I nodded off for a minute or two, as I woke up I thought I heard the driver talking to us, but missed what he was saying. I asked the ever-patient Cindy what he said. He was checking if anyone wanted to get off at a stop on the hill down to the flats.

Got off the bus, say hello to those tenants getting onto the vehicle, and the three of us (Cindy, Elizabeth, and yours-truly)  hobbled to the flats. We met Ian Incharge on the way along Chestnut Walk. I gave him with Cindies prompting (She is kind) a box of the Brandy Liqueurs as a treat. We had a laugh in the lift, and I made my way to the flat and a much-needed wee-wee and medicalisationing of the lesion.

Got the things put away and got the mushrooms and peas simmering with demerara sugar and lemon. Hope it tastes alright?

Got updating this blog to here, and the weariness and tiredness loomed.

So I stopped and got the nosh sorted out.

I really enjoyed this meal. The sourdough bread was excellent, the salt & vinegar potato thins very tasty, the extra Strong cheddar was good, tomatoes and apples were okay. The most costly item on the plate, the shelled Kenyan Pod Peas from Marks & Spencers, that I boiled long and slow with lemon juice and demerara sugar, tasted delightful. A 9.45/10 Taste-Rating!

So, there’s a tip I’ve discovered for anyone else to try. Cindy, Jenny, Elizabeth, Mary, Penny, Lynne, Susie, Margaret, Deana, Julie… or maybe not. Hehe! But I loved em!

I got the TV on, to watch the A-Team double-episodes. I didn’t make it to the first set of advertisements… Zzzz!