23.45hrs: I awoke and lay there on the £300 second-hand recliner, awaiting the brain to join me in my semi-consciousness state. The nihility and nebulosity slowly found a route to semi-apprehension and limited but blurry understanding of my surroundings, transforming my galimatias-like thoughts into a rudimentary comprehensible form.

I could see no signs of nocturnal-nibbling having taken place… yet anyway.

I manipulated my plentiful flesh from the recliner, and after knocking the spring water bottle off of the Ottoman, gave myself one heck of painful toe stub against the computer chair leg. I’d not suffered any toe-stubbings for ages, but I made up for it with this one. Gorblimey it stung! Hehehe!

Getting into the kitchen, I immediately noted the Evil ironclad Boll-Weevil black biting beetles and their flying artillery in the form of the damned Lady Bugs, had come out to fight. Checked the wet room, hallway, and spare room, they were in all of the rooms!

It’s getting a bit frustrating this infestation is now! I used up another of the ‘Raid’ bug killer sprays, as I counter attacked in each room, making myself cough a bit. Haha!

I keep killing no end of the buggers twice-daily, but back they come every time! Some of the Weevils looked like they were growing wings, the ones in the spare room did, anyway. There were a far higher proportion of live ones this morning as well. Oh, I’m fed up with them!

Just how are the Lady Bugs getting in through the new unwanted, just fitted, light and view-destroying new windows? Perhaps when I was out, the bugs landed on my clothing, and I gave them a lift into the apartment?

I’ve spent such a long time weevil and beetle battling I feel tired out now. Every time (And there were many dozens of them) I had to bend to pick the things off the floor, Hippy Hilda and the Belinda Back-Pain let me know their displeasure! Humph!

I got around to doing the Health Checks and taking the medications eventually. Hours after getting up.

I got the computer on, only to find that things were very slow with it.

I struggled through going on the WordPress Reader section and found some good stuff on it again. Then, the signal came good again? The lights on the router thingy keep flashing, no, flickering a lot, though?

It was a bit of a slog, but I got the Thursday Diary updated and posted off. Gawd-Strewth, it’s 0500hrs gone already!

I made an order for a fodder delivery for next Thursday.

Then made a start on this blog. As I had a Giddy Dizzy Dennis spell. I put this down to all the bending and getting up I had to do to sort the damned Weevil-beetles and Lady Bugs attack earlier. It didn’t last long, all over in ten minutes or so.

Off to the Porcelain Throne. A messy pongy evacuation yet again, but I expected it and took a Dia-Limit capsule earlier with the standard medications. Even so, I swallowed another one, as things were ultra liquified.

Good news though, oh yes! Harold’s Haemorrhoids hardly bled at all! I wish I could say the same for Inchies fungal lesion. Tsk! 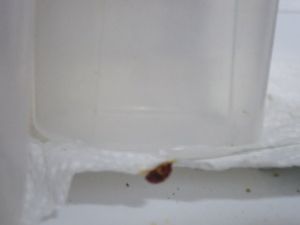 Washed the hands and to the kitchen to make another mug of tea.

On the window ledge, I spotted another Lady Bug. She had deposited herself under some paper towelling, and to me, it looked like she had laid some eggs? Do ladybirds lay eggs? I’ll look that up…

I found this out: Ladybirds lay eggs one or more times a year (species vary), in batches of up to 40. They are black, turning to yellow or orange and will hatch within 4-10 days. Oh, dearie me!

I felt a bit peckish, so I had a few (honestly only a few) of the pork scratchings and some Scottish shorties. Then went on YouTube.

Got the ablutions done and sorted. Took the rubbish bags to the chute, then readied things and went down and out into the damp, windy weather, to take some external shots of the flats for the extra post to make later about the upgrading progress for WordPress. I took a recycling bag down with me.

Gaynor came out after me, and we had a little chinwag. She confirmed that next week I can use her flat, to get pictures from a different perspective, bless her.

I put all these pictures on the new post: Pictorial Progress Report

Then I called into the Nottingham City Homes, Winwood Flats, Oberstgruppenführeress Wardens Temporary HQ, Willmott-Dixon workers breakfast and tea-break room, Sarcasm & Insult distribution area, Tenants Socialisation Shed, Telling Inchcock off Zone, Things like crockery and pottery to be stolen from, and residents room and had a chat with Lynne and Julie.

Then back inside and up to Jenny and Franks flat. I felt a bit like I was imposing, but they were very kind and got sorted, using their bedroom and kitchen windows. Here are a few of the pictures that I took.

I thanked them and got down to the flat… no, up to the flat. And got the pork shoulder steaks (After the regulation hourly short-sharp wee-wee, of course, Hehe!) in the oven, the mini-potatoes were already in the crockpot.

Then made up the Upgrading blog and posted it off. (Six-hour job)

Visited the WordPress Reader section. When I got to reading the posts, about furries Dougie and Andy, it suddenly came over all dark and foreboding. 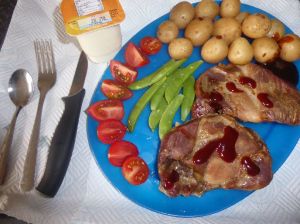 Got the nosh sorted and served up.

Just as I had got the plate laid out, I turned to put the pans in the sink to soak in washing up liquid, and I kicked over a bucket of water I’d forgotten that I had left on the floor earlier. By the time I had cleaned it up, the nosh was barely warm.

Still, I ate most of it.

Fell asleep with the tray on my knee. Woke up later with it on the floor.