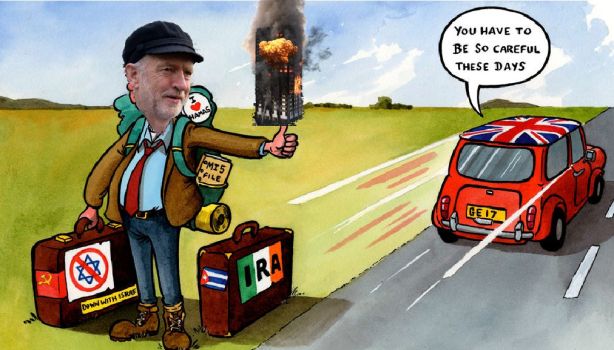 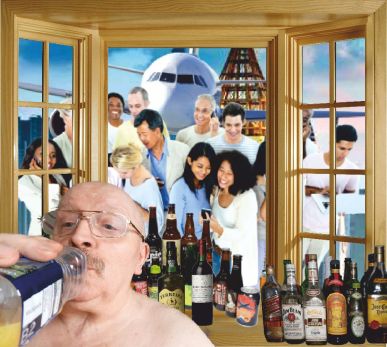 00:05hrs: I woke, I think in the middle of a dream. (This is odd for me remembering them so well) I was in a skyscraper office of some sort, and people were floating up outside to the window, where I was supposed to be serving them with drinks? A plane was coming towards the building, and I remember seeing it and taking a swig from a bottle, then realising I was drinking orange juice… I called out “Cut”, “I should be drinking alcohol here…” Someone hit me on the head with a clapper-board and told me I was sacked! I shouted to everyone that I was going to throw myself out of the window. The people outside helped me through the window and clapped as I flailed about on my descent to the pavement waiting below, I landed on an old-style American Yellow Cab. Very weird? I made up this graphic from memory as best I could later to go on here.

I had to go to the wet room, for an SSWW (Short, sharp wee-wee). 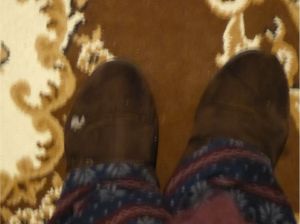 As I fumbled about getting my voluminous, onerous hog-like belly and torso free of the £300 second-hand rickety recliner, and got my footwear on, I realised that the left little toes corn was now worked its way through the new slippers! I can’t understand it, it’s not as if they were cheap from the Poundland Shop, I bought these from the Shoe Zone, paying £4.99 for them, too! And the label said they were Grade A Quality, made in Taiwan. And they are only a few months old. Hehehe! Oh, the wit is flowing now, I do feel a lot better moodwise this morning, I have to say.

Off to the small room and by then I needed to use the Porcelain Throne as well. Another long session and painful with just a tad of haemorrhaging. But, still more comfortable than two days ago. So, no complaints from yours truly. 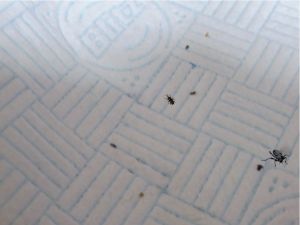 Washed up the dandies, and off on patrol. A right assortment of bugs was collected on my Evil ironclad Boll-Weevil black biting beetles (EIBWBBBs) reconnoitring seek and destroy mission.

As I suspected yesterday, the Weevils seem to have joined forces with some other bugs and counter-attacked overnight. The calculating double-dealing, perfidious, unscrupulous, scheming, deceitful, cunning little beasts! No, I’m not talking about politicians this time, Hahaha! 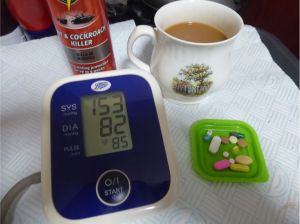 I tended to the Health Checks and took the medications. The bug killer in the picture on the right is not part of my drugs. Hehe! 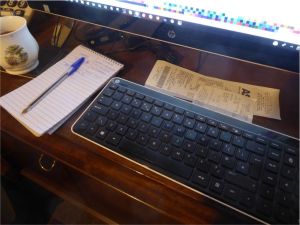 Got on the computer on the 1959 model of the 1963 Hopewells G-Plan cabinet in which the doors no longer open, the drawers stick sometimes, the shelves are rotting, and the polish is rapidly dulling and scratched. Donations appreciated! Hehehe!

On the keyboard with the letters worn off the buttons, and is infested with Weevils, to get the Sad, Saturday post updated and sent off to WordPress. Took me ages to get it finished, mainly due to the visits of Shaking Shaun. Not seen him for a while, I’d hoped he might have moved on, but, no. Humph!

Went on the WP reader section and answered a WP comment.

I then made up an Asda Walmart order for Tuesday. Best day I thought, with me not having an INR Warfarin blood test this week.

Went to make another mug of tea 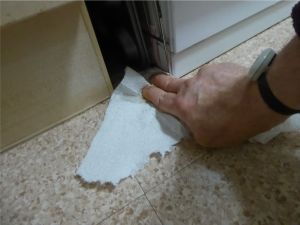 . I noticed how bad the floor had gotten with all the Rentokill, Raid and Sanmex bug killer spray that had been used. So, I got down on my knees with a cloth and kitchen towels with the Poundland shop bought Dettol hard-surface cleaner spray and had a good clean up. Dried it off with the towels.

This proved to be a trying and painful job for me. Well, I say that; the cleaning was not too stressful at all… It was the trying to get back up on my feet afterwards, that was to prove the most arduous, fatiguing, almost gruelling part of the task. So, my being a good boy and cleaning up, cost more hassle from Anne Gyna, Arthur Itis and Reflux Roger, who all joined in the attack on me with Shaking Shaun. Still, yer don’t like complaining does yer. Haha!

Got the mushroom in the saucepan in water and balsamic vinegar. Made a mug of tea to replace the one that went cold, and had another SSWW. Then made a start on this blog. During which, Shaking Shaun had had enough of punishing me and eased off, bless him.

I tried again to get on with the personal dictionary correcting. More hours of the day consumed!

Blurred Vision Vladimir kicked-off. My own fault maybe, spending too long at the computer screen?

Got the potatoes in the oven.

SSWW and the Health Checks completed. 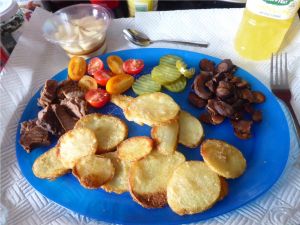 Washed the pots and settled in the £300 second-hand recliner to watch some TV, sure that this, as usual, would send me off into the land of Nod.

Oh, no, not this night it didn’t. Over the next five hours, I must have had thirty or more little few-minute drop-offs, the longest lasting for ten minutes or so. But proper sleep? Humph!