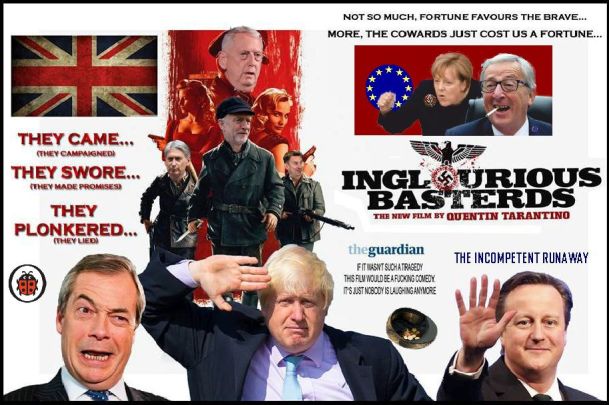 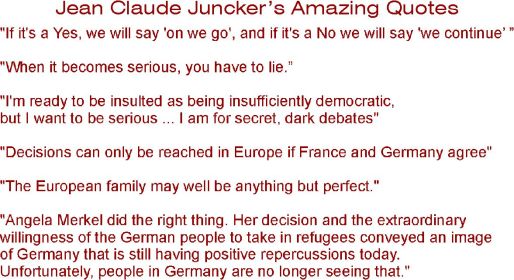 0015hrs: Woke with a cracking headache over the left eye. On the plus side, I didn’t go through my usual unpleasant expergefactory process of self-discriminatory, nit-picking and fault finding of my day’s actions, decisions, worthlessnesses, and fears. I just lay there trying to work out why I was feeling so glumpse and nefastous with myself, almost self-hating, for the few psychotomimetic, awkward moments that lingered pesteringly.

I was saved from this mental dysphoria, by the summoning from the innards, for me to attend and utilise the Porcelain Throne.

I extracted my outsize, paunchy elephantine stomached torso from the £300 second-hand recliner with no bother or hassle whatsoever. (My EQ told me this would not last for 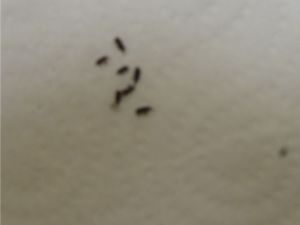 long!) Off to the wet room.

As I was seated doing my duty, I scanned the floor of the room and spotted about seven of the Evil ironclad Boll-Weevil black biting beetles.

Completed the evacuation, and gathered up the ‘all dead’ carcasses of the weevils. Put them in a paper towel, and said a few words over them as I wrapped them up, sprayed them with disinfectant and deposited them in the waste 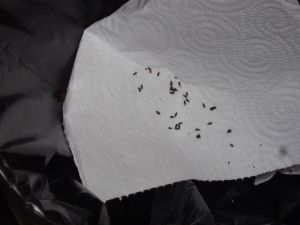 bin. Hehehe! They all seemed to be adults, which was worrying because the last week they have mostly been young ones?

In the spare room, I discovered more Weevils than of flat. EIBWBBB’s were scattered all around. Tsk!

Washed up, and off to the kitchen to get the Health Checks done. 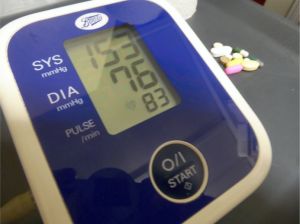 The Sys, Dia, and Pulse had all come down nicely.

This headache continues to grind on. Humph!

Made a brew (the last one went cold) and made a start on finalising the Saturday Diary. Got it posted off, and began to make this one up.

Went on Facebooking, a lot to catch up on this morning, with my not doing any yesterday due to the early arrival of Fatigue Francis.

I decided to take an extra painkiller, the aching head is getting worse I think. Ah-well!

Spend a good few hours on TFZer Facebooking, WordPress Reading, Comments etc. By the time I had got caught up with yesterday’s blog updating and posting, the headache had eased off.

Did some graphic titivating on CorelDraw for later. 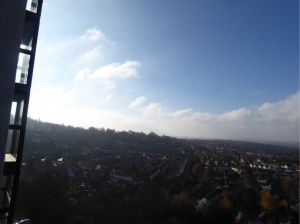 I tended to the ablutionisationing as soon as it was 0800hrs, and I could use the shower without disturbing my neighbours too early with the noise. Had a refreshing session, didn’t cut myself shaving. (Although, I managed to cut my gums with the toothbrush, Klutz!)

The view outside was decidedly different on the left to the right? 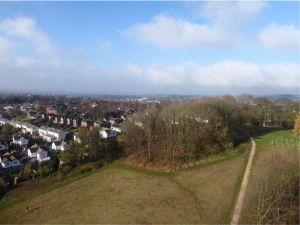 Seeing my beloved Tree Copse looking so thinned out and sadly damaged more by yobboes cutting paths through from top to bottom, made me feel so depressed.

I decided to get out a bit for a bit of exercise and fresh air.

Thought I’d call at the Co-op to get some more apples to replace the Lidl Cox’s that had all got mouldy centres. I’d thrown them away.

Took two black bags to the waste chute. Paid a rather messy visit to the Porcelain Throne, cleaned up again. I gathered the bag, hearing aids inserted in the lug-holes, the correct 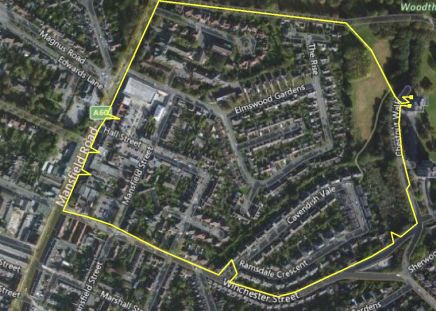 glasses put on, put the gloves on, ensured I took the recycling jars and bag with me, made sure I had some money in my pocket, and set on my little hobble around the block, so’s to put it. See the tiny route map below left.

Down in the elevator, out of the lobby and to the recycling and glass bin.

I added my empty gherkin and vinegar bottle to the Thatchers Vintage Cyder, Peroni, wines, Champagne, Gin, Whiskey, Absynthe, Jack Daniels, Spirytus Rektyfikowany, Balkan, Zubrowka Bison, Huangiju, Kirsch, Cognac, Rum, Tequila, Lager, Freya Birch Spirit 40% Whisky Exchange, Black Cow pure milk Vodka 40%, Harrowgate Rum 40%, and Sangria bottles in the bin. I even found a bottle of a new one me; Brewmeister’s Armageddon beer (which has an incredible 65% abv according to the label)! I looked this beer up later and got this report: A Scottish brewery has created the world’s strongest beer — but a pint of Armageddon will cost drinkers a mind-blowing £80! Still, no good me being jealous. Hehehe! 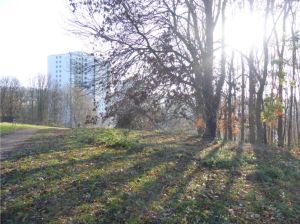 Over the road and off up the gravel hill path to the Woodthorpe Grange Park. Hippy Hilda and Arthur Itis being no bother whatsoever! Off course, Anne Gyna didn’t like the going uphill.

At the top, I took this sad photo of the once beautiful thick tree copse. Looking rather threadbare and frayed now. Heartbreaking, for a nemophilist like me!
Waking down the path to the Mansfield Road gate, and doing a bit of nephelococcygia (the act of finding shapes in clouds), daydreaming, and 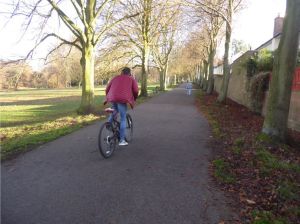 watching the dogs taking their owners for a game of ball – I was suddenly feeling so contented, comfortable and warm. Despite the sunshine producing no heat.

It had to happen, a rabid 6’6″ young Nottinghamian Pavement Cyclist, shot speedily by me while I was standing still watching the clouds (Well, one has to have a hobby. Hahaha!) And the git belted by me so close, it made me jump a little. Oy Vey, the Nudnik! 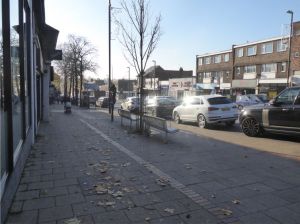 No longer in my contented frame of mind, thanks to the Herbert on the bike, I plodded on out of the park and up and over the hill into Sherwood.

I called in the Charity shop to see if I could find a John Q or The Negotiator DVDs. No luck.

Out and down to the Wilko store and had a look around. I came out with kitchen rolls, some nibbles for the Social box and a bottle of washing-up liquid.

Paid the lady, and out into the oh so cold sunshine. Up the road and into the Co-op store. Leaving there with some fresh tomatoes, oven chips, marshmallows and Cox’s apples, hopefully, these will not have rotten cores like the Lidl ones did. 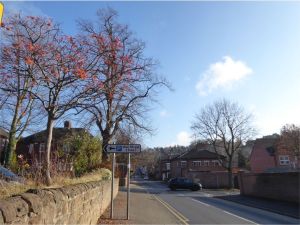 Down the hill, and left starting off up the dreaded Anne Gyna prompting Winchester Street Hill.

I did notice an unusual shape in one of the bigger clouds, just out of interest, can you also see it? Think eagle.

Anne Gyna soon started to complain as I walked up the incline.

When I got up to Cavendish Vale, I turned into the road to take this view of all three components of Winwood Heights. Woodthorpe Court on the left, the new Extra Care block and Sturmscharführeress Warden’s Offices in the centre, and Winchester Court on the right. 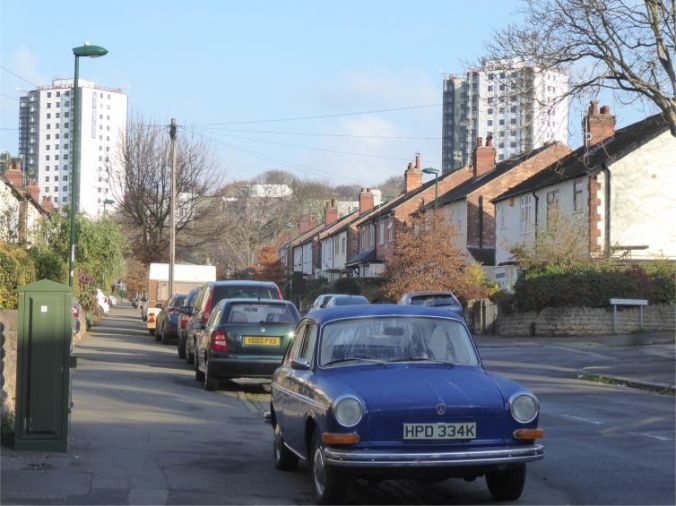 Note the old Volkswagon car? ‘K’ registrations, that would be a 1971 VW Fastback Mark 3 with the 1.6H engine, I think. 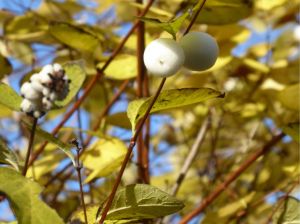 I moved on up the hill again and came across these flowers/plant sticking above the fencing further up. I’ven o idea what they are, but they do look just like the ‘Special White Radishes’ I got from Sainsbury’s last week? Apparently, they are not them, but they did remind me of those radishes. More pointless waffle, Sorry! 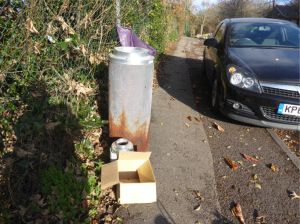 As far as I could tell, up near the garages on Winchester Street, the Mystery Workers Boots and little bin had both vanished! Being replaced with the larger, somewhat rusty container. Nottinghamian Street Art at its finest! Hehe!

The short way up to the top of the hill, and left into Chestnut Walk. 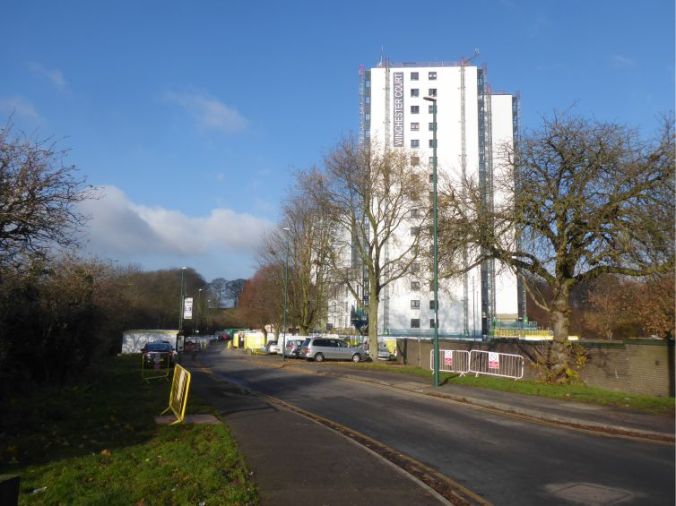 I took the opportunity to picture the scene in front of me. The barren and abandoned looking, lonely, unpopulated view of my beloved Winwood Heights.

In the complex, I didn’t see a soul all day again. Gawd, I hate Chinwagless Weekends!

Got in the flat and Fatigue Francis dawned, earlier than ever on me. Did the Health Checks. 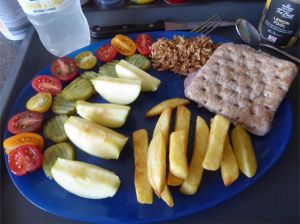 Prepped the fodder and got it served up.

A few of the chips I’d bought, the gherkins, tomatoes, fried dried onions, Cox’s apple and a buttered pork sarnie. Followed by a pot of lemon mousse.

I ate it all up, wished I’d done more chips, though. A well deserved Flavour Rating of 9.3/10 was given!

I’m afraid the blues joined in with the weariness and all I did then (Apart from having many SWWWs, medications and the last Health Check in between getting up to check repeatedly that I had not left any taps on). (I’m going bonkers here you know!) Was to watch a DVD film, Seagal’s ‘Glimmer Man’. But after many nod-offs and rewinds, I gave up. Tsk!