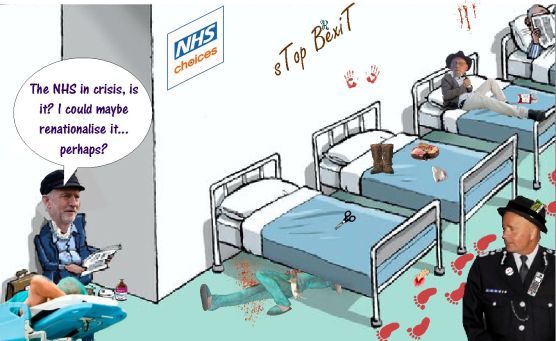 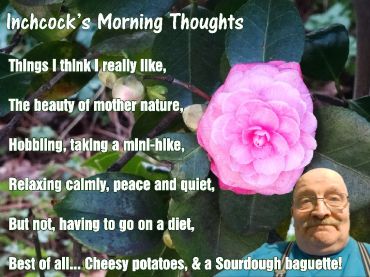 01:15hrs. I woke with the occasion implosion – followed an explosion, from within the catacombs of my innards. “Ah, I thought, at last, a possible successful evacuation is building up. I felt quite smug at my ploy of having the chilli meal last night, in support of the many failed Senna tablets! I slowly began to move the joints and limbs of my overly-stomach-burdened body. Anny Gyna, Duodenal Donald, Reflux Roger, Hernia Henry, Kidneys Kevin and so on; all seemed in a good mood with me!

A cracking rumble from the innards, encourage me to evacuate the rickety, now working again £300, ci 1968 second-hand recliner with all the haste I could muster! Off to the wet room, and onto the Porcelain Throne.

Porcelain Throne Acitivites: *(Things are told on the following sections, just how they were. If you are disinclined to read of such activities, please move down to the photo of the sphygmomanometer, thank you).

Things began to move, as soon as I sat down. But, so slowly and painfully. I’ve often referred to such evacuation contents as torpedo-like in the past. This morning’s agony-ridden description would be Submarine-like! How my five-foot long canal from the end of the small intestines to my rear-end evacuation point the last part of the digestive system stayed undamaged amazed me. How it was not torn-open, and how such a mass of that size got through my tubes, I just don’t know!

After I had recovered from the shock and suffering, another thing puzzled me; How the heck did the plumbing manage to get all that down to the sewers?  The best part of the whole episode was that I did not see a single speck of blood anywhere during or after the procedure. I was a bit nervous after cleaning up and going to make a mug of tea, as I found that wind was escaping of its own accord, for several minutes. I assumed this was my innards, either celebrating getting rid of or preparing for the next dollop brewing up. Hehehe! 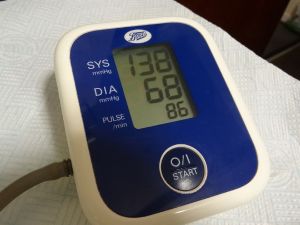 * Got the Health Checks done.

I got the computer on and started on this blog creation. Made up the days Thought Graphic, and had a DTAAD (Dribble-tinkle-and-all-done) wee-wee. With sharp involuntary bursts of what sounded like a two-stroke engine from the rear-end, bursting forth, and painful they all were too!

I got far as here on this page and realised I had not updated yesterday’s blog yet, let alone sent it off. So, I got in with doing that. Klutz!

*(Things are told in the following paragraph, just how they were. If you are hesitant to read of such activities, please move down to the next section, thank you). This did not last long, for another Porcelain Throne visit was demanded! This evacuation was nowhere near as painful as the first one, thank heavens. But it did start Harold’s Haemorrhoids bleeding and stinging badly. The volume was much less but messier.  It took an inordinately long time to clean up afterwards.

04:15hrs, I finally got the Friday blog finished and sent off to WordPress. Phew!

Things were beginning to get active still. The unstoppable aromaless ‘phut-phut-eeck’ winds were escaping with worrying regularity. The innards are now contumacious and bubbling. They are really going to work on giving me some discomfort! I don’t want to sound like an alter-cocker, but several areas of my insides, seem to become more active and harmful, at the same time? And the wee-wees are starting again, albeit they are of the DTAAD (Dribble-tinkle-and-all-done) style wee-wee.

I suppose I should have expected some discomfort, pains, Accifauxpas and Whoopsiedangleplops like this to arrive this morning. After over 44hrs without a Porcelain Visit. The fun and pleasure of Sister Jane and Pete visiting me yesterday, and the good night’s sleep. With my luck and record, it is no surprise to me that with my terrible ill-fated fortuity, there is always the expectancy of a cataclysm, calamity, affliction, catastrophe and or disaster around the corner to suffer. No doubt, they were divined and retributed for me by the Greek Goddess of lousy luck, Tyche, bless her. In repayment of my recent bit of good luck, (For one-and-a-half hours yesterday; Jane & Pete’s visit) and as a lesson for me not to get expectant or hopeful of anything nice, prosperousness or pleasant happening to me, really. ‘Self-Pity and Sorry-for-Myself mode engaged. Hehehe! 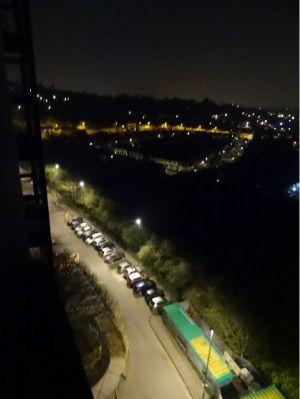 I went to make a brew of tea, and to take the belated medications that I forgot to eat earlier. (Twit!) I had an extra Omeprazole and Ramipril, to try and calm down the innards and Duodenal Donald who’d started to kick-off as well! Fed-Up Mode increased to Defcon 3, Haha!

I took a photograph from the unwanted, impossible to access to clean, hard to open and close, light & view-blocking new windows. I took this in response to my hearing that whining noise again. I thought I might see something outside that might have been the source of the humming sound. But no.

I got back doing this post. The winds still involuntarily coming from the rear, got more frequent, until minutes after I had to visit the Porcelain Throne for the third time!

I far easier passage this time, although it left me feeling more sorer in the rear quarters. And, Harolds Haemorrhoids did not bleed. So that was good.

I went on the WordPress reader page. Then onto Facebook. 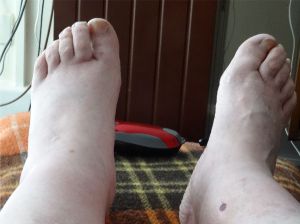 I stopped and bravely, I thought, had a bash at trying to cut the worst of my toenails.

No wonder I thought I was having difficulties in keeping my balance. I discovered that the left leg was more fluid-filled and puffy than the right one! Hehehe!

I only managed to cut the two big nails. It was physically impossible for me to do any more, because of the pain. Hey-ho!

I decided it was time for some breakfast. Cornflakes. Had another DTAAD wee-wee.

Utter fatigue came over me, I tried to sort some cupboards out in the kitchen to try and pull myself out of the sudden mental and physical collapse. I did well for half-an-hour, or so, then Anne Gyna kicked off, and I stopped. Sat down and put on a Dr Who DVD, nodded off for a few minutes, and woke up in need of yet another Porcelain Throne visit! These trips are leaving me very sore in certain areas now! Humph! Where it was all coming from, remains a mystery, but it had changed to the messy variety now, and cleaning up afterwards at least helped concentrate the vagueness and disinterest of the mind. 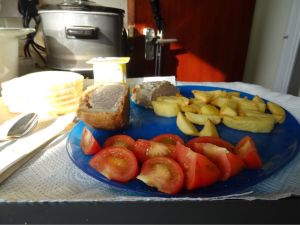 While I was up, I got the dinner sorted out. I deliberately made a small portioned one. Sicilian tomatoes, Melton pork pie and a handful of chips, a few slices of the Milk Roll loaf, and a small pot of lemon yoghourt.

I ate it all, but it took a while, as for some reason I was finding it hard to swallow. So I made sure I masticated the food as well as I could with my shortage of teeth. Hehe! I still enjoyed it, though, a flavour rating of 8.2/10 was granted.

A check on the state of the pins (legs), revealed knobbly shins and some new speckly-spots and blood papsules on the anaemic looking limbs. Hey-ho!

Fell asleep for a while, and was woken with Duodenal Donald and Anne Gyna both going at it, creating discomfort for me. I took a few good swigs of the inefficient, ineffective, inefficacious, inadequate, feeble prescription medicine, to try and calm thing down inside, along with the usual medications.

As I was settling back down in the £300, second-hand ci1968 recliner, another summoning to the Porcelain Throne arrived. Cleaned up afterwards again, and returned to the recliner with a stingy, sore tender rear-end! I put some Germolene on specific areas.

I got things in as comfortable a position as was possible, to alleviate the haemorrhoid pains, and had to get up again for another DTAAD wee-wee!

I think I watched some more of the DVD in between many dropping-off to sleep periods, varying from a minute to ten or so.