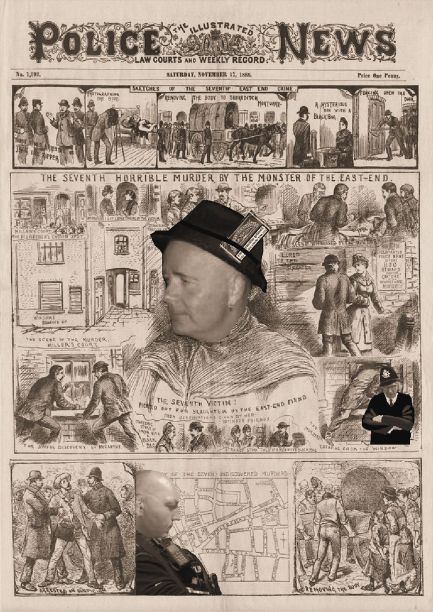 02:00hrs: I can’t say I woke up, cause I never-not really got any sleep after waking up last night realising I’d missed the dentist appointment again! Boy did I annoy myself with that Accifauxpas! I’ve spent hours cursing myself and feebly trying to thing up some miserable excuse to use. Cause last time I did it, I just told them the truth, which was, “I just got confused and forgot about it”. That (the truth) did not go down well with them at all! Oh, dear and Flungledamnations!

I’m still agrynoyd with myself now! So much, so, I rose, intending to get on the email asap. To send a message of super-cringingly, craving for forgiveness and begging their understanding. But, first things first, I had to get out of the £300 second-hand recliner. Which turned out to be an almost painless, and an easy manoeuvre for me. Until it came to grabbing the walking stick. I foolishly lifted the four-pronger over the chair instead of going around to get at it.

Naturally, Shaking-Shoulder Shirley twitched into life, and I hit my head as I dropped it from the maximum height it went to! I believe I might have muttered, ‘Oh dear!’ or something like that! 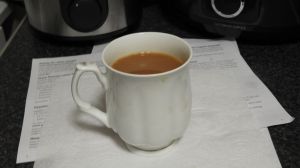 However, the hobble to the kitchen used little effort with no pain or hassle, and I got the brew made. But suddenly there was no time for drinkies, the Porcelain Throne alarm rumbled! And a right odd session it was too!

I got there, I thought in plenty of time, but as I began to sit down, things activated of their accord. Talk about lucky, thankfully I didn’t wait before moving in the direction of the wet room as soon as the rumbling began. Else things could have been dodgy and messy! But the day was saved! No extra cleaning up, even the evacuated product came out quickly, and in almost black little tiny sugar cube shaped lumps. Yes, it surprised me as well! So, this is how good-luck feels? Smug-Mode-Engaged! I cleaned the pan then myself.

Back to the kitchen, the tea was cold, so I made another mug of the Punjana tea. I took it with me to the computer, and as I started it, one of those terrible moments when you feel you’ve forgotten something, or not done summat arose. I wonder if there’s a word for this feeling? It wasn’t a panic, but I was worried, nervous about it at the same time. Nowt’s come to light or anything yet.

Still feeling a little low at my cock-up yesterday, the feeling, no, desire to do a self-knocking ode came to me. It had to be satisfied. So, I made one up. The words flowed out with ease, and it was soon finished and being posted off.

Then the grind began! Updating the Wednesday blog. Crikey! It took hours about six hours to get done! The number of photographs to sort and get on, and Shaking-Shoulder-Shirley were the main culprits for this wasted time. Shirley had actually stopped a few minutes ago, and she’s left me with an aching, probably bruised, if that is possible, to bruise a shoulder joint! This right one is not getting a lot of peace lately, with Shirley getting frisky so often.

As I was about to go through the comments, the same rumbling and grumbling came from the innards. So, off I went to the wet room again. This evacuation was back to the messy, gooey variety I’m afraid. Much cleaning, freshening and medicating required. A lot more bleeding this time, too? Beats me, why? Then again, me being beaten, is nothing new.

The workmen have been hard at it all morning. Funny how sometimes it does, then the noise doesn’t bother me? It can’t be helped, drilling through the flats concrete is a hell of a job.

Back on the computer, with a fresh mug of tea, of course. I tried to get the comments done again, and the intercom flashed and rang out. I could see a blokes stomach on the monitor an ID badge on his chest, couldn’t understand anything he was saying, but I let him in. It turned out it was a meter reader. This brought out thoughts of British Gas (The French-owned company) reminding me of their overcharging me, lying and telling different stories about the meters and the billing, then took me off of the cheap night-rate back onto a single straight cost. Put the price up, and asked me if I’d like to move to another company??? He went into the electricity cupboard and got the reading and shot off. I noticed that some mail had been delivered, five letters lay on the floor. Everyone a circular! 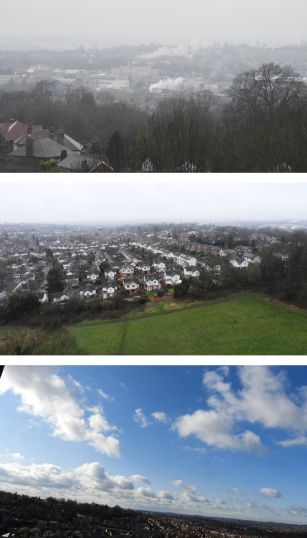 Back to the comments, although by now, I was getting tired. I’d been taking pictures over the morning from the kitchen window, for a sort of time scale display. Here they are on the right.

The sky is looking amazing now, with its artistically flowing clouds. They are Cirrostratus type, I think.

I nearly went to get some biscuits to nibble, well, shame is I did go and get some. But I limited myself to a pack of three caramelised ones. Well, it’s a start to my upcoming diabetic diet?

Then I got a message on the mobile, looked it up, and it was from the Diabetic place. I have to ring them, on 0121 386 6971. I don’t suppose they were told about my hearing on the phone problems. Hang on, 0121? Isn’t that Birmingham? I looked up the number on the web. It was for Stopdiabetes ‘Ingeous’, so, I rang them.

Don’t know what it cost me, but I had to wait for a Speaking Message that I could not hear the words of. I pressed one and hoped for the best. Then waited for the piped music to stop. Then I got the chap. I was on the line for a good while. Especially with having to ask the man to repeat himself so often. Asked about times, I requested as early as possible and explained my problems with PM appointments. He looked up what was available, and he said an 09:30hrs one is free, at Top Valley. I explained about my problems getting there, my mobility etc. and he left me again to have another look. He’d found Sherwood Community Centre do the lessons, but may not have any free spots, but he will try to find out and let me know, he will ring me later.

I interposed, explaining that if I am out and anyone calls, I cannot hear the mobile in traffic or busy places! He sounded patient enough with me. I asked if possible, a text or email would be better. He was non-committal on that. Telling me, they have auto-phone calls set-up?

He then told me that an educator would be running the 60>90-minute course. “Educator? I could be an educator if you want to be educated on how to cut up and slice a spencer of bacon!” That got him! No sense of humour! Hehehe! He gave me some new telephone numbers for me to ring. Told me if I haven’t heard anything in a week, to ring them back again. Mmm? The Sherwood Community Centre would be fine for me. I could walk it in about 40-50 minutes if necessary. Providing I was up to tackling the climb up passing the tree copse, on the steep gravel path on the hill into the park, down to the main road, and along to the centre, and manage to get over the road without mishap. Fingers crossed that they can fit me in some time!

Back for visit three at the Porcelain Throne. A repeat style of the last one, messy! Very much so! Had a job cleaning and medicating again.

The pins (legs) were looking alright though. I’m certain those long Bamboo socks are helping.

I got some parsnips in a tray, with a quick spray of olive oil to soak-in ready to go in the oven later, and a can of peas in a saucepan.

Then got on the WordPress Reader section.

Then on the TFZer Facebooking.

At last, I could get t 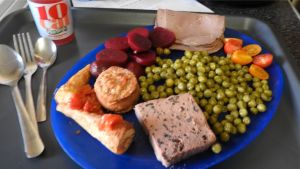 he nosh sorted and served. I was going to treat myself to some chips but managed to resist, and no bread either. This is all so foreign to me, no potatoes, chips or bread? The future is bleak! Haha! The overcooked in the oven parsnips were tasty! Flavour Rating: 7/10, so not bad at all.

Got the pots washed, and had the inspiration to wash the trousers, and let them drip dry on a new hangar over the sink.

I took this evening shot in between washing, wringing and hanging the trousers. I thought it rather pretty with the tiny moon up high.

Remembered the medications a little late on, but no matter, I took them.

I settled in the £300, second-hand, much-abused, c1968, rickety non-working, recliner, and got the TV on. TRying to watch any of the programs between nod-offs, was a mordacious affair. As tired and short of sleep as I was, there was no way I could get to sleep and stay that way, again, like last night. Wake-up – Groan and moan to me… Nod–off, Wake-up – Groan and moan to me… on and on this misery went for hours!

Ah, well! At least the wee-weeing seems to be less intrusive, not a single leak all night!

As made famous by Monte Python. Written by Eric Idle, a genius!

♪ Keep on the bright side of life. De-dum, de-dum…♪ 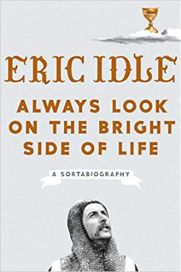 May your foibles ferment with frenzied festivities for fun!