01:50hrs: I stumbled into a sort of imitation life, and waited a few seconds for the brain to catch me up. When it did, the short pleasant moments of vagueness and freedom from fears ended. As the cerebrum  galvanised into life, the regular first instructions on waking arrived; “You need the Porcelain Throne, now!”

So, I stumbled up out of the £300, second-hand, c1968 recliner with relative ease, fell back down again, had another go at getting on my feet, and all went well this time. Off I gingerly wobbled to the wet room.

Passing the picker-upper that I broke yesterday, and making a mental note that I need to get out and buy a new one today! As I limped carefully with the wooden walking stick, I thought to myself: ‘Well at least the brain seems to be working this morning!’ First thoughts and reactions can be very misleading, though. I’ve noticed this before.

The evacuations started then stopped part-way again. I waited for nature and my innards to move things along, cause last time I energetically encouraged activity, the bleeding was terrible. To avoid a repeat, I waited patiently, and in pain, nevertheless, I still fell asleep on the Throne! Harumph! It’s not the first time I’m done it, but I haven’t for a long time now. I even had a dream, that seemed to me so vivid, I got the impression when I woke up, that I’d been dreaming for ages. But the clock told me, I’d only been in the arms of Morpheus for two minutes or so? In the dream, I was in a Courtroom, built from parts of bodies and innards as if I was in a chest or something. I was discussing and arguing with ribs, lungs etc. about why they weren’t sorting out a pact with the Neurotransmitters to get them to work again?

If they would, I offered and promised a bribe of free flowers for life amongst other things that escape me now. Back and forth the arguments went on for ages (in the nightmare), and I ended up being sentenced to life imprisonment without any cheesy potatoes! At this stage, I came back to wakefulness. I was writing down some notes before I forgot everything when I realised that ‘things’ were still half-in half-out! It nowt else, it brought me to life properly. Another few minutes past by and things did flow again and the evacuation was tortuously finished!

Well, two firsts there, dreaming on the toilet, and the most hurtful evacuation ever! I was over-the-moon when I found no bleeding had taken place. Yee-ha!

Washed and cleaned up, and limped to the kitchen. Kettle on then took the medications. Off to the computer to update the Thursday blog. I got it done around 04:00hrs. Had a brew and some bikkies and did some Pinterest uploading, then went on the WordPress reader.

Time to get the ablutions done now. Cause I want to catch the L9 bus at 09:30hrs to Arnold. To get a new picker-upperer. Costing me a fortune these are, Tsk!

Phenomenally few dropsies today. A couple of tiny nicks shaving, it was going smoothly for once. Then as I was medicating certain area in need, and I clouted my elbow on the door edge. Then the door chimes rang-out ♫ I only want to be with you ♫!

As I grabbed the thin dressing gown, I heard Jenny saying something as she let herself in. I hastened to cover my privates, not wanting to Angel to hurt herself laughing, and exited the wet room.

To find that Jenny stood there with a new picker-upper in hand for me to have! (She had read the blog and the picker-upper fiasco, and there she was helping me out again, Bless her cotton socks!) ♥. We chatted a little, and Jenny gave me good advice on certain things, and off she went. I can’t even remember if I thanked her properly, for the Godsent help, for at the end of the day, this tool became so priceless and pain-saving. (Explained later on). I thought I’d get one of the long reach ones today, from the Disability shop in Arnold, that collapse (they break in half when you fall on them, hehe!) and can be taken with me in the trolley guide when I go shopping. This one was perfect for picking up, as I found out when I tried it on a tablet! Smashing, thanks, Jenny, you truly are a comforting, faith-returning Angel! ♥ 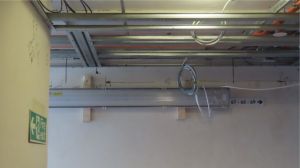 Back to the wet room, and finished off, got dressed, and ready with a deal of alacrity, to be in time to catch the bus. I took the bags to the waste chute on the way out.

The work taking place, and giving everyone a headache, on the fire sprinklers was showing signs of advancement in the lift lobby.

I walked out onto Chestnut Way to hobble to the bus stop for a change. Where many residents were waiting, Mary, Shirley, Christine, and others, with Malcolm in Newsreader-form. It seems that last night, Winwood Heights had had a fire in one of the flats, and the bloke in flat below, got flooded, he has no power, his cooker, fridge, etcetera are now useless! Carpets destroyed. The discussion that I listened to, was about who does he claim off of, his own insurance, the Fire Department or Nottingham City Homes. By gum, when money is mentioned, the atmosphere got heated! Hehehe!

The sun was bright, but it was bitterly cold, I was glad when the bus arrived. As I got settled in the side-saddle seat, I noticed how white and pale the hands looked? Either the carbolic soap had increased in strength, or I’d died and nobody told me! Hahaha! Colin Cramps started in that hand at the same time. Tsk!

I looked up and noticed how deep in thought, and Russian-Romanian looking, Mary was. I sneaked this surprisingly decent snap of her.

Most folks got off in Sherwood. Margaret and I tried a conversation en route to Arnold, but it was farcical, with us both being on the deaf side. 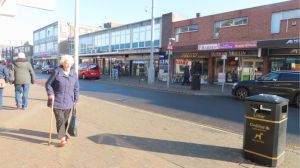 We dropped off on Front Street. I walked with Mary as far as the Iceland store, and I accidentally bumped my trolley into Mary’s, twice! This did not please the gal, oh, dearie me! Trouble ‘t Mill!

I went into the store and said my farewells to Mary. The damned shop didn’t have any of the tinned new potatoes in stock. Tsk! Worra let down! They did have the pork & pickle pies, Truffle chips and Wholemeal sliced rolls, which I purchased. 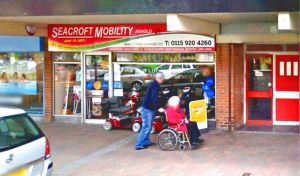 Paid, and went to the Mobility shop to get a long reach picker-upperer. So very-most irking. Agravannoying! Flanglemanglingly-Frenetically-Frustrating! They didn’t have any in stock! The lady joyfully told me they will have some in next week. Huh! That was disappointing! It proves the value of befriending Jenny and her wonderful help in donating the picker-upperer earlier. Thus saving me struggling! ♥

Off to the Futltons Food shop. Found another type of Tuna for Josie, and got a bottle of sterilised milk.

Twenty-five minutes before the bus was due, so

I nipped across the road to the Asda (Walmart) store. I bought: Gravy granules, lemon yoghourts, including a large pot of Sicilian Lemon Layered type. Bit of a luxury. A can of chilli-con-carne, and mushrooms. 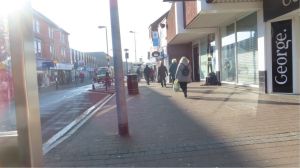 Out in the heatless sunshine onto Front Street and to the bus stop. No signs of Mary? As I stood there waiting, Mary arrived, telling me she was going to Asda and will catch the bus later at the back of the store.

So, I waited and caught the bus and as it went on its circuitous route, the brain seemed to go into one of its vacuous-moments. I may well have fallen asleep, though. Either way, I was shaken out of it, by the driver papping his horn.

A car transporter was blocking the road. Parked right on the corner! The driver radioed in about it. The lorry did not move and the driver of the transporter seemed uninterested. Eventually, the L9’s driver skilfully, but dangerously had to drive on the grass to get us by! Well done, Sir! Mary did not get on the bus in Arnold.

Back at the flats, I had a job getting up on my feet to get of the bus. (Arthur Itis’s knees) The driver was patient with me. Once up and on the move, things improved with the knees, and I took a photo of the Chestnut Tree, on Chestnut Walk outside Winwood Court. The light-giving,

but gelid sun seemed to be getting brighter now. I arrived at the Woodthorpe Court entrance and took this shot. I thought at this time, of the fire last night, and the good fortune that it was at nighttime. For sure, the emergency services

would have difficulty in finding anywhere to park, not that it would have been easy in the day either really.

I had a visit from Shaking Shaun, that lasted for a few hours, but it wasn’t too severe and Shaking-Shoulder-Shirley did not join in.

I got the jammies on, and did the handwashing, while the oven chips cooked. I checked to see if any details of last night’s fire were in the news, but as usual, nothing was mentioned. It wasn’t even on the Fire Brigade’s ‘Incident list’? Although there were four false alarms at the flats on it, three of them from the workmen accidentally setting off the alarm. It doesn’t show much confidence in the Fire Sprinklers reliability when they eventually get finished and working, does it?

I made up some wholemeal rolls, buttered, added cooked slices, and thickly cut black Ibera tomatoes, salted them. Then I added the truffle-chips to the tray. A pot of lemon yoghourt for afters, and got settled in the £300, second-hand recliner to digest the fodder.

Again, the third day on the trot, I got disturbed as I took the first bite! Not the telephone this time, but the door chimes ringing out! I took a while in getting to the door, making sure the food tray was firmly placed so it didn’t fall off of the chair, grabbed the stick and poddled to the door. Nobody was there? Mmm!

Back to the chair, and talk about bad-timing… The autonomic nerves in the hand and fingers failed at the very moment I foolishly used my right hand to pick up the tray of food! I think I retrieved all of the chips, that had spread in the folds of my stomach, the creases in the chair, the carpet and one even fell right into my drink of orange juice on the Ottoman! The search for and cleaning up of the tomatoes, beef, roll crumbs, smudges of butter and yoghourt took me ages!

Picking up and sorting things out, was sop painful! Especially the repeatedly having to get down and back up to clean the butter marks and pressed in crumbs where I’d stood on some. Now I had Anne Gyna and Hernia Henry giving me grief as well! I really felt sorry for myself! Hehehe! Thank the Heavens that Jenny had given me that picker upperer! Her caring actions had saved the day again, for sure! ♥

So, no nosh tonight then! I did have some biscuits to nibble, mindful that Duodenal Donald might kick-off as well if I didn’t eat something. I don’t think I could have coped if he’d joined in with the others at the same time. Then I realised I had not taken the medications, so I did!

But as for getting to sleep? Huh!

What an odd day!