the spirits sagging, and borborygmus grumbled within! A rare of late wee-wee was developing, so I fought my clinomania and gingerly extracted my cyclopean-sized-belly and body from the £300, second-hand, c1968 none-working recliner. Manipulating the folds of stomach flesh, was not easy!

As I grappled for the stick, which had fallen over, the sound of the damn & blasted ‘Hum’ was as loud as it has ever been. I actually thought something else might be the cause of this horrendous unceasing, droning wind-like noise, but on checking later, nowt was found. Still feeling so tired and drained did not help my irritability stakes at all. Sleep, sweet Morpheous, where art thou? Or summat like that. Hehe!

I got to the GPWWB (Grey-Plastic-Wee-Wee-Bucket), I was benumbed to see it had not been used overnight. Then again, I think I spent the most significant part of my nocturnal time, awake! Cholericalisations! The wee-wee was of the TBKIWAWBC (The-Bladder-Know-It-Wants-A-Wee-But-Can’t!) variety. A few painful drips, a long time waiting and hoping for more to flow, then I gave up, and went to wash the hands and the barely damp bucket. Hehehe!

As I was putting the kettle on, the grumbling innards doubled their efforts, and I returned post-haste to the wet room.

I got on the Porcelain Throne, and things moved of their own accord, but so painfully. Then, it got a little awkward. Part-way through the motion, the evacuation got in a jam! Half in, half-out, stinging like hell, and refusing to budge! I reached for the crossword book. Partly in an effort to distract myself from the antagonisticalisationing, and the trickling started from Little Inchy. It was if the innards had come to some peace treaty together, the wee-weeing was allowed to go ahead, although in a long-drawn-out marathon, then the heavy stuff started actioning again. Argh!

Yet afterwards, there were no signs of any bleeding and no mess? Just blessed relief that it was over! As I was cleaning up, the left chest pains started again, like yesterday?

Back to the kitchen, took the medications, made the brew and returned to the front room and got the computer going. Arthur Itis and Duodenal Donald both being kind to me. I can’t tell about Anne Gyna, cause this aching, dull pain in the chest, is similar but the same as her usual stabbing pains. So, I don’t know what it is. But I do know I’ve been through more pain this morning, from various ailments and bodily functions, than since the heart op! Hogwashalisations! Ah, well, that’s my self-pity, and the choplogic moments over with. Haha!

I got on with updating yesterday’s Friday diary. It took me a considerable amount of time, with so many photographicalisations to go on it. But I got it all finished, in between many pathetic sprinkling wee-wees. I put some stuff on Pinterest.

A niggly dry cough came and went as it pleased.

Then when adding to the Facebook photo albums, and enjoying doing it, about half-way through, I got this message come up on the screen, as the screen froze. A bit piss-offing that was! I turned off Facebook and back on again. Same message when I tried to add photos again.

So, I gave up on it and made a start on this Saturday post. A couple of hours later, I tried again. Nope, the same, I can’t put any more photographs on! Gragnipples!

I went on the WordPress Reader.

Then, on to CorelDraw to make up some more graphicalisations. Slow work. 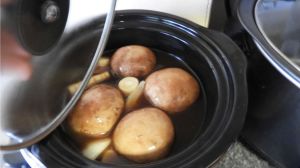 I then got the vegetables, well, the chestnut mushrooms prepped and in the crock-pot.

Then, got some parsnips, onions, and tomatoes and added them to the pot. I made up gravy, with vegetable stock cube mixed in, and put the that in the slow-cooker alongside the veg. 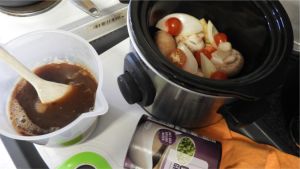 I hope it comes out alright, then I can use them with the braised beef, and make an imitation stew. I took these shots while doing it.

Then to the computer, and added them to this blog. Back to the graphicationalisationing next, it’s takin me ages to get them done. Tsk!

Pressed on with CorelDrawing for a while, but my mood is not good and concentration very poor! I got just three done, and they were a lot for me in my present, erm… oblique state of mind.

I kept going into the kitchen, got the pan of water on for the boil-in-the-bag beef. Panicked a bit when I didn’t check it for a while, hobbled hastily to the stove, convinced I’d find a right mess all over the cooker.

Anxiety over! Huh! I’d not turned the power on!

The vegetables are getting overcooked now, and it will be about forty-minutes before the meat is cooked. Oh, I am a Klutz!

I got the nosh sorted out. I’m going to eat it from the big cheesy potato mixing basin, cause I don’t want to spill all over me and the recliner. Like I did last w

The beef in the bag was so small, but the extra gravy in it might have made up the legal weight. But it was lip-smackingly tasty!

The veg came out as good as I could have hoped for, too.

The irritating dry cough paid me an evening visit, which took the edge off of enjoying the meal. But at least I didn’t spill any! Flavour Rating 7/10.

At last, I got some sleep in. So much for watching the ‘New Tricks’ DVD. Hehehe!