01:25hrs: I woke, once again in need of a wee-wee. But my thoughts were of the worryingly crusty feeling from the PPs, no doubt about it, dried blood, caked on. Very gently, testingly and nervously, I inched myself free of the £300, second-hand, c1968 recliner, and onto my feet. Caught my balance, and very cautiously, limped to the wetroom to sort things out.

I needed a Porcelain Throne session by the time I’d arrived got to the WC. But needed to sort out the ‘leakage’ first, so ended up unwisely, holding things back while I cleaned up the blood and wrapped and dished the PPs!

Removing the part-calcified haemoglobin was a smidge painful. (I’ll say!) I cleaned the area up quickly and got down to start the Throne session. Huh! Agony is the only word to describe it. But, it didn’t take as long as it has done recently but was a much messier affair. The freshening and medicalisationing was another uncomfortable job. As far as I could ascertain, Harolds Haemorrhoids and the big furuncle had both been leaking blood overnight. I’d determined, that the bluey blood was from the boil, the deep red was from Harold’s piles.

The Germolene and Germoloids creams were spread together all over, and much of it, too! I think I’ve ordered some of both creams on the Sainsbury’s order for Wednesday, next week. I got almost instant gratification when I felt the pain easing within a few minutes of ointments being applied. 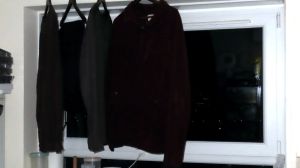 As I wobbled to the kitchenette, I could have sang with joy as the pains from my rear-end, began steadily diminishing, and heaved a genuine sigh of relief.

I took a snap of the window, with the washing hanging up to dry on the curtainless rails. Got the kettle on and took a customary look outside for any signs of nuclear war, fires, or the Lord was returning. I spotted what I thought was a single star, and tried to zoom in on it for a closer shot. But it was not to be, it was a jet aeroplane, and being zoomed in, and with it moving so fast, and unable to steady the hands, I failed at three or four attempts to photo it and gave up. I’m not sure if you can see it, I’ve made the photo larger just in case you can. The plane is near the centre just below half-way down. 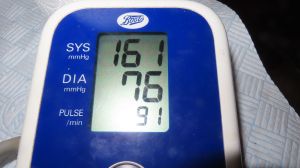 I got the Health Checks done, starting with the blood pressure hemadynamometer. Which was not good, the Sys was still too high again, at 161. The pulse and Dia were both okay I reckoned. I’ve stopped trying to use the new in-the-ear thermometer now. Too much bother, it rarely gives a reading in

The old stick one was working, and for the first time in ages, the temperature had gone up a smidge, to 34.7°c, not a lot, but at least up a bit on recent days.

I made a brew of Thompsons Punjana tea and took the medications.

Go Computer Cameron going, and used CorelDraw to edit the photo’s on the SHD card. This took me so long, and Nicodemus’s Neurotransmitters didn’t help any, with the nerve-ends coming on and going off-line! Grr!

Many hours later, I’d managed to get the Tuesday blog updated, sent off to WordPress, the link emailed, shots on Pinterest, Facebooked a while, then made a start on this post.

The Vampire nurse is due, I checked the timing on the calendar, and guess what? I found an email come in from Sainsbury’s, telling me that the delivery today will be at 17:30>18:00hrs! Not only had I got the time mixed up, but I was seven days out on the date! What a proper Shmegegge! Fool! Twit!

Disappointed with one’s self, now! I set off for the wet room to get the ablutions done. 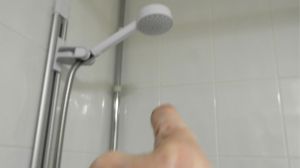 Not a single showerhead-dropsies! Yee-ha!

By Jolly-Jingo, that went exceptionally well! No hassle cleaning the teggies, shaving produced not a single cut or nick! Although a fair few dropsies of razors! The showering, despite the water not being too warm for some reason, went great! No showerhead dropsies, just the soap (2), loofah brush (2), and the razor (2), and a not serious at all clunk of the shoulder against the grab bar. Brillmagic!

The medicationalisationing, as was expected after the earlier bleeding, was done with great care, but inevitably the pain factor was not a good one. Overall, this session left me feeling salubrious, and in a Yellow Level ‘Risk-Of-Contentment-Mode’! Hehehe!

Unfortunately, during the drying off and getting the fresh PP’s on, I did clear some of the stuff off of the floor cabinet with the towel. But only a few!

I had to take four wee-wees during this session? All of them of the annoying piddly SWI (Sprinkly-Weak-Itchy) variety. The now wrinkled left hand, of its own accord, began to imitate a Mr Spock sign? Haha! The redness was pleasant to see, but it soon faded when I exited the wet-room. 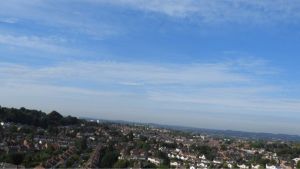 To the much-used kitchen again, and made a mug of Glengettie tea.

I took a shot of the changing morning sky, with its forming steaky clouds.

Then back onto the computer.

I found this unintentional picture as well on the SDH card. I must have taken it either getting to open or close the window, I suppose. See that? See how keen, alert and sharp I was there, working that out? Ahem!

My beloved Vampire, Nurse Hristina, might come early, I hope. I had a nosey at the thermometer prices on Amazon. Ah, the Vampire nurse arrived! I was automatically cheered up even further! The gal was in a rush, I think she’s changed her route around so she could visit me earlier, bless her cotton socks! ♥ She soon had my blood taken, and off she had to fly.

I did an hour of sorting and trying to clean up a bit, but Anne Gyna began a marathon stabbing session, and SSS (Shuddering-Shoulder-Shirley) went full pelt at me for several minutes. I was done in, shattered, ready to drop.

So I closed the computer, got a drink of water and sat down, fighting the urge to sleep, in case I missed the Sainsbury order arriving! 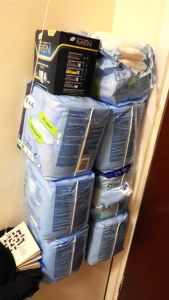 I felt a little perkier and got up and sorted the PP’s in the wet room, restocked from the rubbish room. They look a little like they are not going to stay in place too long, don’t they? Tsk!

I spent a while sat on the throne, occasionally having a bash at the crossword book, and stewing over my never having thought that I’d end up how I am now. No depression mind, just a smidge of pathetic feeling melancholy, perhaps.

I soon came out of my mini-spell of the blues, as I rose from the plastic seat, and knocked some

medications off of the floor cabinet top. Then hit my shoulder on the metal bars of the seat raiser, as I bent down to retrieve the objects. Thus, setting SSS off on one of her short Shuddering-Shoulder-Shindigs! Blockstooum!

Into the kitchen to take the belated afternoon medications.

The precipitation was falling with a particular venom when I got into the kitchenette. I caught a bit of the temporary gloom on offer with these two pictures taken from inside of the balcony, not wanting to open the windows and get wet. But the rain still came in through the gaps in the window layout and soaked me. Grangleclogs!

I then got the bags ready to go back to Sainsbury’s, and an empty Amazon box from the junk-room for the Sainsbury’s fodder to go in, as they are no longer supplying carrier bags.

I was sorting some graphics for updating on CorelDraw. Then took some treats to Olive, Limoncello desserts, G&T’s, some 99 calories chocolate noughat bars, and a packet of biscuits. She gave me a tray of green grapes in return. We enjoyed a little chinwag, and I went back to the flat. (All of three paces, Hehe!)

The intercom flashed. It was Sainsbury’s food delivery lady arriving. She was a cheery soul, and she mentioned some substitutes they had made, asking if they were alright, which they were with me (Surami Sticks, different brand). No lemon & lime spring water, or Sourdough bread. She soon had the things put in the box for me and put it through into the hallway for me, too. I slipped her a can of G&T, thanked her, and off she trotted.

I got the fodder through to the kitchen, a veritable feast of fantastic looking, but some naughty foods. A Smidge-Of-Guilt Mode adopted!

I soon got the meal made up, no cooking involved, cause the spuds were already done in the crock-pot, the left-over garden peas were in the saucepan. I tried some of both of the tomato varieties, both were decent flavoured. The grapes were lovely, not too sweet with a slight tang that I enjoyed.

I was worn out by then, I struggled to stay awake while I was eating the meal. Put the things in the bowl to soak, checked the windows, lights, stove etc. and got my handsome features, and muscular-firm body down belatedly, into the c1968, rickety recliner, in search of Sweet Morpheous.

But no success! It was hours before I nodded off. Anti-Inchcock Though-Storms being the main reason. Then I felt the need to put things to rights, wars, crime, Coronavirus… you name it! Tsk! Criggleblogsworthisms!