05:15hrs. I reluctantly woke, despite having had a good six hours sleep, I still felt so tired. I spent a few moments deep in uhtceare, the mind stewing away. The dysania was beaten. I disentangled my plump body-mass from the £300 second-hand rickety recliner and got up on my feet. This was a painful operation, like the toes and feet, were hurting so, and the legs (Arthur Itis) were too! Getting to stand upright almost brought a cry of agony from me. Indeed, some quietly spoken curse words emanated from within, through gritted teeth. And that’s not easy when you only have few teggies left. Hehe!

This sudden activity was in response to a call to the Porcelain Throne. Maybe the Senna would be successful this morning. I limped taking care not to allow the ankle to go over this time and got to the WC, and hastily dropped them: then deposited my bottom on the Porcelain Throne (Well, plastic as it is now, Hehehe). 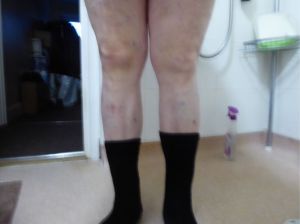 The discomfort of getting the movement to start was memorable for its extremeness! But once this did activate, it was all over within seconds. To be followed by an LSPDOWWs (Long-Slow-Painfull-Drawn-out-Wee-wee). I can’t recall taking so long in my life.

The legs were showing great albedineity again. Although maybe not as bad so. Then again, perhaps they were?

A long time later, I cleaned things up and had a wash. A change of clothes, and off to the kitchen to take the medications. Decision time again. I’m not anywhere near as confident in making choices than I was before the Stroke; Not that I was all that sure back then. Huh! Do I take a Senna or not with the morning doses? Had things finally freed-up? I chickened-out and didn’t take a Senna after all. What a ditherer!

A good bout of sneezing shook me up, they were a bit vicious. The right-hand fingers-ends were shaking when they came into contact with anything. I don’t know why I mentioned this; it is a regular occurrence. Took the doses of conventional medicines.

I needed another what I thought was an urgent wee-wee, but it wasn’t. This time it was in the SWDWW (Short-weak-dribbling-wee-wee) style. 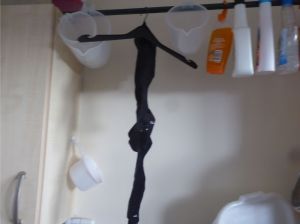 Checked the Ankle-Support I’d washed and hung to dry. It seemed suitable to wear, dry enough just about. Got it out ready for the Carer.

On more bout of sneezing, that lasted a little longer.

I got on the computer to add photos and update and finished. Then posted the Saturday diary.

Typing is not going to be easy today. The nerve ends in the fingers are a bit jittery. Still, correcting errors had become a way of life since I got home. And today’s persistent, ever-present mind waffling isn’t helping. Oy Vey!  Then went on the WordPress reader. I made a start on this blog up to here. 07:20hrs. No carer yet, he’s not late though, it is still within the time range. I wondered if I had made a cock-up when telling yesterdays carer that I will have to cancel Mondays help, as I will be out on my way to the Audio Clinic when they are due to arrive. All, very convoluted innit? Life! Tsk!

Went on CorelDraw to do the graphics for tomorrows post. Didn’t get far with it at all, the Carer called at 07:50hrs. He’s got the better of the Ankle-Support and had it fitted within minutes. I confirmed the cancellation of tomorrows visit. Explaining the appointment to get the hearing aids needed attending, and showed him the timing for the bus and meeting. He confirmed it had been put off. 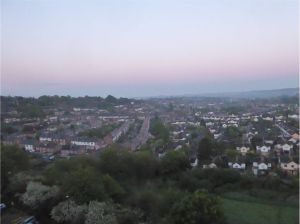 Got the kettle on and made a brew. I checked out the prescription availability stock. I have only enough medications for one week, up to next Monday! Doing these checks.

I had to have three more pathetic, dribbling SWDWWs. I did take an extra Senna and one Furesomide.

Another SWDWW. I think we can take it that these were coming thick and fast, but very slowly, all day long? Humph!

Made a brew again, and back to the CorelDraw to create the graphics for tomorrow’s Inchcock Today. Two hours later, I had got two templates ready to use. Phew! THree wee-wees during this period. But the last one was more like an LSPDOWWs (Long-Slow-Painfull-Drawn-out-Wee-wee) So, I thin the Furesomide is working to free things? I do not like having to take drugs just so I can wee-wee or do something on the Porcelain Throne, but still, needs must I suppose.

I tried the Plastic Topped Throne. But the Senna seems to have stopped working, all I got was a little wind. Humph!

When I had cleaned up and gone to the kitchen, I wondered why it felt so warm in there. Then I remembered that when I washed the ankle-support last night and hung it to dry, I had increased the night-rate heater to help with the drying job, and had forgotten to turn it down again. Fancy that, me forgetting something. Haha!

I got the mushroom flavoured with some balsamic vinegar and Hoisin sauce, and got the slow cooker going. The finger ends were still getting the shakes and lack of feeling when I used them, especially when typing. And the sneezing spells kept showing up. Ah-well!

I must get a good shower t clean the crassulent body-mass, and scrub-up later, to save time in the morning. I shan’t do it too early so the shave will last longer. 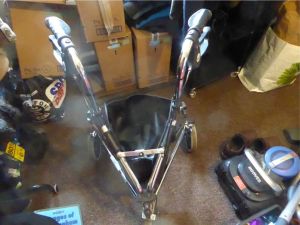 I went on the TFZer Facebooking next. Plenty of knocks and bangs from above this morning?

Managed, hours and hours later, to complete a draught blog.

Had a look to see if I could mend the rattling handlebar on the trolley-walker. Gave up again! 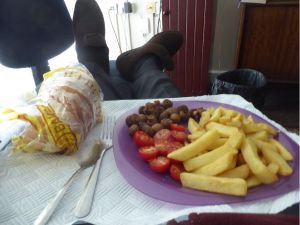 Got the nosh prepared. Fries (Chips). Mushrooms and tomatoes. Ate nearly all of it, and had two slices of Polish Sourdough bread!

I turned off the computer and settled down with a drink of spring water.

Fell asleep for an hour or so.

Put the TV on, but the headphones had broken and were not working!.

I decided it would be a good idea to ready things for the morning, and went through things I had to remember: Bus fare and times – Audio Clinic Cards, etc. Then I set about taking a shower shave etc.

Which is when it all went wrong for me. I tried to fit the new sink plug, and realised I had bought the wrong size! Trying to mend the old one and gave myself a nasty slice cut on the thumb, that I can’t stop bleeding. Tried aftershave and Daktacort, then three plasters that were soaked straight away, and finally pads and giant plaster, then same again with soak pads underneath. 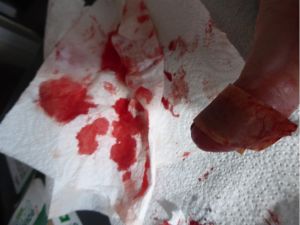 Due to the shakes in the right hand, I reckon. Humph!

I put a plaster on it and continued shaving, teggies and took the shower. But the bleeding was unstoppable.

A right bloody mess all over the wetroom, shower curtain, WC and sink, walls… and me. You get the idea?

The last dressing, I put on extra-tight.

I rang on Josie’s door to ask her if she had any plasters, as I have used all my stock up. Oy Vey! She suggested I keep my thumb-up. Hahaha!

I went on Facebook to report my lastest Whoopsedangleplop. Haha!

Well and genuinely tired-out now, but I think the bleeding is getting slower now.