04:00hrs. After a terrible wee-wee interrupted sleep, I woke reluctantly, unwillingly and grudgingly, for yet another SWWW (Short-weak-wee-wee). I rose from the £300, second-hand, c1969, gungy-beige, tattered, moth-eaten, threadbare and often not-working recliner, and got upright, with hardly any difficulty this morning. Trudged limpingly to the wet room. About the twelfth visit of the night, or thereabouts. Due to spraying nature of the current wee-wees, I am using the WC, as opposed to the EGPWWB Emergency Grey Plastic Wee-wee bucket, to keep the splashing onto surrounding things, to a minimum. Because the control of wee-weeing is intractable. Not within my grasp or abilities. Modulation of the bladder is impossible at the moment. Ululation Mode Adopted!

Had to use the Porcelain Throne, and that was stressful, it was hard work encouraging what bit that came out, to come! If you know what I mean? A bit of bleeding, but the solid nature of the evacuation meant it was far less messy this time.

I got the wash and brush-up, teggies, shave, etc. done, and another wee-wee was needed.

I hadn’t noticed earlier, but by gum, the skin was pasty-looking and anaemic-like, again. I wondered if I was really alive or was I dreaming? Hehe!

The left hand suffered a Colin Cramps attack. However, it didn’t last long, and I found this surprising.

Then, as it calmed down, the lower arm went red, and the hand and fingers whiter than ever!

I must say because one cannot see the rust, the £2 second-hand charity shop wristwatch looked a bit on the posh, with its new £10 strap. Haha!

I thought that yesterdays performance with the Sock-Glide was funny, but today’s trials were much more testing and trying, yet so amusing.

The legs had one bigger than the other again, both merging with the rest of the body, in showing pallidity. The Sock-Glide performance was Charlie Chaplinish! I got it level, and the first sock over and clipped in place, easily (almost!). Getting it on, was a different thing altogether! I got myself sat on the Throne, and the metal guide out flat in front, as I slid the foot into the sock, the right hand and leg started off on a Shaking Shaun episode… However, the long bamboo socks hide the pot-marks nicely. Haha! 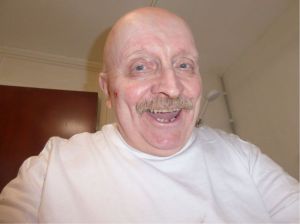 Then, I slipped off of the Porcelain Throne, and got tangled up with the Glide on the floor, knocking the stuff off of the floor cabinet! And found myself laughing about it! Klutz!

I struggled beyond words to untangle myself and get back up again. I thought I might get my telegraph from the Queen before I was back upright.

This was the first case of the leg Shakes coming, at an inopportune moment, for me. So I can’t complain. Not sure how long it took me to get back upright and sort out the mess, but I had to start anew with the Sock-Glide. The bruises blended in the many I already had, apart from one (I assume) on the bum! No photo available. Oy-Yoy-Yoy!

Getting the first sock on proved time-consuming, embarrassing and painful. But, I think getting it on, was about as funny as it could possibly have been! Thankfully, the left sock fitting proved far less bothersome. Hehehe!

I offered a prayer for my luck to change.

I made another brew to replace the one that had gone cold.

I got the computer on and did a graphic for later use on CorelDraw. Then updated the

Saturday blog and posted it off.

Anon, the carer arrived and soon had the Ankle-Support on the leg, and it is working fine. I emailed this photo of him, on the right to him, but, the email address was not recognised by Google. Bother!

I took the medications and new Nitrofurantoin tablet.

During which I realised I had stupidly left the hot water tap on! No hot water then, until tonight. At least I had got the ablutions done first this time. Looking for silver lining there, Haha!

Back to the wet room for another Porcelain Throne visit. Which was much like the first visit. But the following wee-wee: what a difference this time. I almost needed another shave, by the time it stopped coming! Still not controllable, but a little more pressure this time. I think an excellent acronym might be, an ELUWW (Extremely-Long-Uncontrollable-Wee-Wee) Tsk!

No hot water to wash the hands with, so I went to the kitchen to boil the kettle to use. While in there, I opened the unwanted, uncommonly thick-framed, light & view-blocking, extra window panes to wash that one cannot even reach, the needing the use of the step-ladder if one wants to see over and the ground outside to check if any fire-engines are there in response to the Fire Alarm, That I cannot hear anyway, new windows, and took some shots of the slowly brightening day.

A shot below, taken blind, so as to avoid using the step ladder, as my luck has not been all that good this morning. Whoopsiedangleplops galore, as you might have noticed, already!

Then a close up one at random, of the Elmswood Gardens and the Rise area, opposite the flat.

The one element missing, is there are no human tellurians in view anywhere.

A lot of work to be done on blogging today. So, I made a start on this blog, up to here, and then went on to create some drafts and page headers to use later. All that concentrating had tired me out. Poor old thing!

I seem to have been dropping things from the right hand and walking into things a lot today.

Josie called at the flat, and gave some bananas, tomatoes, then called back with some potatoes! Bless her, my pleasure to do the Saturday nosh for us both.

Got the shakes again, feeling tired, so stopped on the computer, and made the nosh.

Well, at least I ate all of the food this time. Slurp!

Not feeling too good, had a sit-down, and watched TV.

Tired as I felt, sleep would not come. Watched the gogglebox for ages, in between a few more SWWWs.

I got up and took a couple of photographs through the open curtains of the unwanted, work-making, mega-thick-framed, multitude of glass to be cleaned that I cannot reach, rain admitting balcony windows, of the sun setting.

Bad I felt healthwise at this moment, the beauty of the view did not escape me!

The right foot began aching more than hurting. I struggled and got the Ankle Support off early, 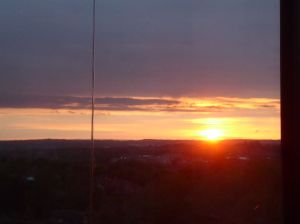 but the ankle aching continued?

During the nipping to the WC and into the kitchen, I realised that the walking stick had hidden away. Tsk! Had a proper search and seek session, but where it had gone was beyond me.

Then the Colin Cramps started; a lousy bout this time. Still no sleep came!

I must have nodded off, eventually. Gawd knows how late in the morning, cause I woke up at 03:30hrs, and gave up on kip, and rose with the ankle still aching and feeling not a little rough?