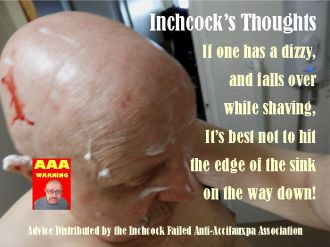 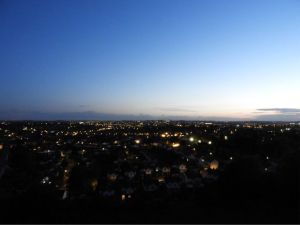 00:25hrs. Having been woken up by fifteen landline phone calls over an hour, from a food delivery personage, I decided sleep was once again not to be attainable for me. Gadzooks!

I can’t remember if I put this photo I took in yesterdays Inchcock Today or not, but it is so beautiful, I’ll put it on again, just in case.

I made a brew and got on with the updating of the Sunday blog. Got it finished and posted off, then had a visit to the WordPress Reader.

The tea had gone cold, and I required another wee-wee to go with the three taken while doing the updating. No cramps, and although the leg is dancing and stamping of its own accord occasionally, the fingers and hands are much calmer this morning. Typing is much easier today. (Hope I don’t regret saying this later… Mmm!) I made a fresh mug of Glengettie Special Assam/Nigerian blend tea. Possibly the best-tasting tea ever!

While the kettle was boiling, the need for another wee-wee arrived. Nothing felt urgent in any way, and I grabbed the EGPWWB and began to relieve myself. This time, it was of the LSPDOWW (Long-Slow-Painful-Drawn-out-Wee-Wee) variety. I can’t remember ever having taken so long a wee-wee before in my life! Hehehe! Within five minutes, I needed another wee-wee. This time, it was back to the SWDWW (Short-Weak-Dribbling-Wee-Wee) type. Confusing!

I went on the TFZer Facebooking next.

I’m still a bit confused about whether or not I should wear the Ankle-Support-Strapping or not. The problem is, it is now hurting the feet and toes. With all those weeks of my being institutionalised, the toenails are far too long, and the corns and callouses are giving some stick when I wear the Support? I am not supposed to go out without it on. But the only paediatrician… no that’s not right, erm… Chiropodist, I can find, works only at a call-in centre on Mondays. But not today, of course, cause it’s another Bank Holiday. This means I have to wait another week to see him. I might ask the nurse in the morning if she has any id

eas that might help. I’m a bit nervous in case the foot and ankle give way and goes over, and breaks any bones. That would not be good at all. I think Caroline is due tomorrow, I’ll check the Google Calendar. Yes, that’s right, Caroline is due, and the Dentist check-up at 12:40hrs.

The mystery kitchen object remains just that, a mystery?

I’ve just realised that I have not had a wee-wee for over two hours now. The bladder seems to be doing its own thing? Haha!

I got carried away and decided to do some hand-washing again. Or should I, I thought to myself? Being a dippydro, and indecisive-ponderer, after much ado and much shilly-shallying, uncertainty and scrupling, I decided I would do the washing after-all. Just a T-shirt and heavy long-sleeved thermal baselayer jumper to do.

The leg and arm, of course, both started shaking at the same time as I was cleaning the thermal jumper. I dropped it and slashed soapy water all over the sink, drying area, floor and myself! Now I know why I was hesitating over whether I should do the job in the first place – my EQ knew I shouldn’t, but I had frittered away and squandered the EQ advice that I should have known to listen to! Will I ever learn? I am such a nudzh!

Making things even worse; I cleaned up the mess and was getting the T-shirt on the flat airer. With the cunningly positioned bowls and basins to catch any water that drips, which they were doing a grand job of. And I knocked over the big vase with my sticking-out right foot, emptying the water where I had just cleaned up the first chance-medley. And soaked the right foot, slipper and sock through! I am such a schnook! I was in a right shemozzle. Oy Gevalt!

I cleared the newly wetted things up again. Amidst some silent oaths and firm self-mumblage! Then another wee-wee was tended to, thankfully they seemed to have settled back as of the SWDWW (Short-weak-dribbling-wee-wee) type.

It was snug and warm in the flat this morning. I was piddling around with just the night socks, short-sleeved shirt and the PPs on. Not even got my slippers on now (They were drying next to the stand-up airer drying, Humph!).

A feeling that I may need the Porcelain Throne prompted me to put the kettle on and nip to the wet room. After yesterday’s agonisingly painful, and marathon activity session, that was the longest bar one, that I have ever taken. The other was many years ago, in about 1972, when I had a barium meal at the hospital, and the swine didn’t give me any of the loosening crystals afterwards! As I recall, that was a two-hour session! I was not really forward to this evacuation. But it was a false alarm. Plenty of splurting wind arrived, but no signs of any movement from the innards at all!

I did sit there a while, just in case. While I waited in vain for some activity, I did notice how the pins (legs), and one was fatter than the other, both were the new standard for me pale and anaemic. Also, they had accrued some more papsules, spots and growths to go with the scar from yesterday’s battle I lost with the sock-glide when the shakes started at an inopportune moment, just as I was about to put my foot in the glide. Had it been a few seconds earlier or later, I may not have got the wound at all. Hey-Ho!

I think this problem might be caused by Lou Gehrig’s disease or Axonotmesis nerve problem. Either way, its effects are facinorous. The right leg did a bit of its jumping, shaking and stomping while I was in wet room. However, the fingers remain far calmer than yesterday. So, every cloud has a silver lining. I looked this up on Google, it means that even the worst events or situations have some positive aspect. I can’t think of any at the moment, but I think they could be right, I suppose. Humph!

I went onto CorelDraw to create some Inchcock Thoughts of the Day, and a couple of Brexit Humour graphics.

The landline flashed. It was someone from the Stroke Team, a lady, asking if she could call on me in about an hour. I could not catch every word, but she said she’ll be here about 0900hrs. I was surprised by it being a Bank Holiday Monday. So, I ran about getting a wash, shave, and teggies were all done, etc.

I then realised that the wristlet alarm was not on my wrist. Panic! I searched each room repeatedly. I’m sure I had it on when I woke up as well. After half-and-hour of flapping about, checking drawers, shelves and the finnimbrun pots, I recognised that it was 0915hrs, no one had come yet? Had I misheard? Then, I rechecked the kitchen again. The moment I found the alarm, it all came back to me… Tsk! When I was doing the hand-washing, I took the wristlet off, to keep it dry! Hey-ho!

It was Physio Lucy who arrived around 10:15hrs. A quickie today. Exercises done, that all seemed to go well, to me.

I took a snap of the view from the unwanted, light & view blocking new multi-panes of ungettable-to glass to clean windows.

A hue to it that was pleasing this time. 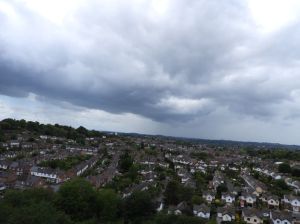 An hour or so later, from roughly the same area, but taken from a wider angle.

An early nosh was decided on. I raided the freezer for some Aberdeen Angus beef-burgers, and very fatty they were indeed.

The oven tray I did them in was 1/3rd deep in melted fat in no time at all. 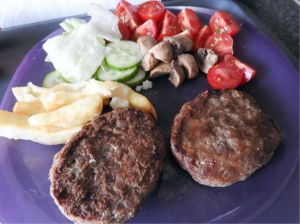 The chips I added to the oven was soon soaked in fat, and uneatable really, so they got thrown away.

The tomatoes salad and mushrooms were lovely. But the beefburgers were plastic in both composition and taste! Eurgh! Not a lot was eaten.

The body finally gave in to sleep, and I drifted

off. I woke a few hours later, an when I burst awake, I was confused as to just what time it was.

It was early evening, and the sky looked quite magnificent. Moody and threatening a little, mind you.

I had an SWDWW, got the kettle on, and updated this diary.

Caroline coming in the morning, then the Dentist check-ups to go for.

Off for a Porcelain Throne visit. Same as of late, hard, solid and a painful devil to move.

Caught up on the TFZer Facebooking. Then went on the WordPress Reader for a while.

Grrr! But I did catch up a little bit when I nodded off earlier. Hehehe!