04:15hrs. I woke in need of another wee-wee. I disentangled my still-tired boy from the £300 second-hand, c1968, horrendously beige-coloured, rickety recliner. A couple of paces with the stick, and utilised the EGPWWB (Emergency Grey Plastic Wee-Wee Bucket). I was a little taken aback when it turned out to be an SHLNS (Sharp-Hosepipe-Like-No-Sensation) wee-wee. No pain, no effort used, and No idea when it had stopped! Hehe!

I took the well-filled bucket with me, to be emptied and sanitised, to the kitchen. Did this job, then got the handwashing onto the airer for drying. The sphygmomanometer was still not working, and the thermometer had also packed up. Humph!

So I made a brew, took the medications, and responded to the innards demands, and made my way to the Porcelain Throne. Oh, heck! Back to the rock hard, rear-end tearing, solid, oh so painful, torpedo-style again! It never gets itself right, this month has been all one extreme or the other. Tsk!

I got the computer going, and answered some Emails, then got on with updating the Thursday WordPress blog. Emailed it, and put some pictures on the Pinterest site. All this took me a long time of course, but the hands and finger, well, leg, arm, and shoulder as well, were all being so kind to me this morning. Without their placid contribution, I am sure this job would have taken me at least twice as long.

I fancied something to eat for brekkers. I am not an ascesis, but I resisted, bearing in mind the astronomically, supersized nosh I had consumed last night. (No wonder the evacuation was so painful. Huh!)

I then made a start on this blog. Getting as far as here, and changed to make up an order for Morrisons next week. I made short work of this for once. The reason being, I ordered tow saucepans fr delivery with the food. That almost made up the minimum spend on their own. Tsk! It will save me having to carry them back from Arnold today. I can concentrate on getting other things to carry home from Asda, then.

Time was getting one with my late waking up, so I went on the WordPress reader. Then it was time for the ablutionalisationing session. Only one dropsie, the razor, and only one little nick shaving. Smug-Mode-Adopted!

Dressed all ready, trolley prepared, shopping list in pocket black bags to the waste chute, and out, down the lift and made my way through the link-passage to the Windwood Court lobby.

I like the sensor lights that come on as you walk along the passageway, with residents flats either side of you. Hopefully, we will not disturb any extra-care residents when they move in. The pictures on the walls give the place a homely-looking appearance. 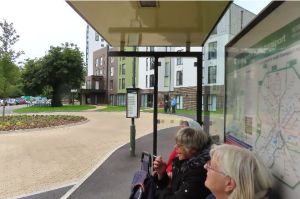 I got to the lobby entrance and called into the Obersturmbannfhreress Warden’s holding & interrogation office. Mentioned the new water leak in the flat, that seems to have stopped now. Mini-chinwag, and out to the bus stop with Lynne, Christine and Mary. We were soon joined by a gang of Winwood Heightonians. The crowd nattered away, it was nice to listen to then,

even though I was missing a lot of the conversations they were having. Caroline from the top car home arrived, Marie, John and others, got on the first, City Bound bus.

I spotted the absence of the now removed old shed across the road. Oddly, there was a touch of sorrow at it going?

The one I needed pulled in behind, and I had to make my way through those boarding the City L9, so was almost the last one getting on, one of the ladies let me go through with the three-wheeler, bless her. It was one of those crammed-full trips. I got in a side-saddle seat, the last one. I had a failed crossword puzzle session en-route, as the rain began to fall.

As I made my way to the Boyes store to check out their saucepans availability, the market place had just the two stalls open, one of them a fruit & veg one, so, I mosied on over to take a look at what was available. They had some fresh looking garden peas, not cheap, but their pristine condition encouraged me to get a pound of them for £1.50. I also got some excellent looking baking potatoes, five for £2.

Then, with the bag of the trolley already full, I carried on to Boyes and investigated their saucepan shelves. No small ones with lids, well, they had some, but they were too costly, for what they were. After checking out their hats, none at all, long sleeve shirts, none at all either, I went to the medication and cleaning shelves, where I got some bargains. Lavender Dettol at £2, Olive oil, 2 for £2, and two Cirtus pull-up fresh air bottles. The spare carrier had to be used to carry them. And I still had Asda to visit!

The rain was easing off as I hobbled to the Asda store. I met Mary in the shop, we had a natter.

I arrived much longer later at the self-serve checkouts with Baxter’s beetroot that had a Special Offer price of £1 on the shelving, that the machine decided should be £1.54, I didn’t notice until later, Tsk!  A milk roll loaf, two bags of the Asda label bacon-flavoured fries, some vine tomatoes. I found some yoghourt rice cakes that were cheaper than the Lidl ones, so got three packs of them.

Out to the bus stop on Front Street, where Mary was waiting. We had another nattering session, as the rain started again. I was struggling with the trolley and a full carrier bag of stuff. As the bus progressed, we picked up other tenants, and three of them all had the same, a trolley and full carrier bag to cope with. I nightmare journey, having to move each time someone wanted to get on or off the bus. But we did have a laugh along the way.

Back at the flats, I got off last, and the others had all shot off home. I walked back through the corridor in Winwood and came out at the Woodthorpe lift lobby. I took a picture of the hall, but it has dissolved into the ether from the SD card. Like so many seem to do! Humph!

Up to the apartment, and the fatigue dawned, as it usually does. I suddenly felt all drained again. I had a somewhat off-putting SPSHPL (Short-Painfull-Semi-Hose-Pipe-Like) wee-wee. Got the kettle on, put the fodder away, made the tea and podded some peas to soak in a little demerara-sugared water for later.

Washed and locked the front door, before stripping off, Got the chips in the oven cooking, made some tomato sarnies, and doing a bit of cleaning around the cooker, retrieving some shot-off peas as I did so. Haha!

The nosh was a decent effort. The tomato sandwiches, fries, smokey bacon, beetroot, gherkins and the most delightful fresh garden peas, were all consumed.

After which, I found myself in a ruminative mood, for some reason. I got the pots washed up and tray cleaned and got down settled in the £300, second-hand, sometimes working but not tonight. c1968, crumby beige-coloured, rickety, rusty, recliner.

But the recalcitrant, contemplative mind-meandering continued. The thoughts were querulous, worrying, and it seemed I was on a self-hating campaign again. Luckily for me, these harrowing sentiments were stopped in an instant, as I rose to have another wee-wee…

After taking this time, a quiescent RDD (Reluctant-Drip-Drip) wee-wee, I stubbed the same toe again, against the Ottoman! Even at the time and in all that pain, I was aware of and glad it had stopped the self-destructive brain-storming.

I thought if I put on the TV and watch an A-team episode, this would surely send me to sleep? And it did! In short-time as well!