04:15hrs: The moment I woke up, the memories of the ‘dodgy’ phone call from last night flooded back. I laid and stewed thinking about it, wondering what to do about it. Thankfully, the need of a wee-wee arose, breaking my train of thoughts. I disentangled my grossly big and wobbly-bellied body from the c1968 recliner. Got Metal Mickey the four-pronged walking stick) and off to the EOGPB (Emergency-Overnight-Grey-Plastic-Bucket), and took an RSP (Reluctant-Sprinkly-Painful) type, wee-wee.

No demand for the Porcelain Throne, that was a rarity.

Took the bucket and cleaned and sanitised it, washed the hands and off to the kitchen for the important stuff, a mug of Thompsons Punjana tea.

Took a photo of the morning view, and set about getting the Health Checks sorted.

The sphygmomanometer readings were a little better today, the SYS was down a fair bit, I’m glad to report.

I nearly injected a hypo of Enoxaparin. I stopped myself in time, and wondered how I could have thought to do this in the first place? Still, if one didn’t recognise that you make mistakes, you’d never know the difference between confidence and ability! Too many people in my life have shown over-confidence and conceitedness to con their way up the ladder – but with a minimum of ability. Just thought I’d mention it, like! But when I was last made redundant, the chap they kept on, was caught stealing from them a month or two later. Hehehe!

I got on with updating the Monday blog and despite the occasional attacks from Shaking Shaun, did it in a reasonable time. Pinterested some photos, went on the WordPress Reader.

Jenny called me on the landline and put me into a more stable frame of mind.  When she told me that she had had similar phonecalls, and they would all be cons! Bless her!

I had an updating session on Facebook, then time approached for me to get the ablutions done. And what a mixed bag of a session this one was!

Abltionalisationing Advice available, to other multi-ailment sufferers. At cheap rates!

Got the PPs and trousers on, and off to the kitchen to make a brew of Morrison’s Extra Strong Assam Tea!

Stroke of bad luck as I was putting the milk back into the fridge. The damn right leg suddenly went into an involuntary Neuropathic Schuhplattler dance routine! I didn’t go over mind, I grabbed at the fridge door for balance; which caused all of the things, aluminium cooking tray, foils dishes etc. to tumble from the refrigerator top!  Grigglebogsblowit! I spent a long time, trying to reshape some of the trays, and get them back up again. The lost amazing thing about the incident is not the bruise I got on my left leg, how I avoided going over, or my not dropping the milk, but the flaming noise they made! Hehehe! I bet Herbert heard it! 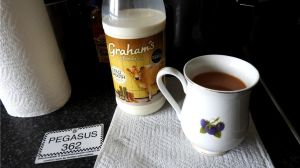 I made another brew of Glengettie Gold this time, to replace the Assam brew that had gone cold as I cleared up the mess. And gingerly got the milk out of the cooler, and even more carefully, put it back!

Herbert started to bang and knock from above!

Whether it was due to my noisy calamity, I have no idea.

I took a shot through the balcony window.

At long last, I started to create this blog. And the landline burst forth and flashed again. It was my Brother-in-law, flat breaker, Cancer suffering, going bald after his Chemo, Xyrophobia suffering, over amour propred, Pete.

We had a jolly good natter. Poor lad, his hair is coming out faster after his third session in the nuclear chemotherapy-pump. But he says he enjoyed talking to others in the same boat at the hospital. Last night the bloke woke up feeling sick, and he was. I think this is not a bad thing, as the bodies natural defences are telling him they want to rid the innards of some sort of danger. Easy for me to say, I know, but I believe this.

Pete’s always been a bit of Charles Atlas type, fit, rarely been ill with it (Makes me sick! Hehe, only joking, Pete!) So it’s only natural he’s going to struggle to cope with this cancer. Mind you, he did once fall asleep on the arm of the setee, fell off and broke his neck! Not a lot of people can say that! Hahaha! 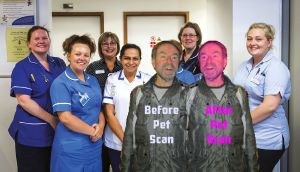 Pete mentioned my blog message about the phoney phone call I got, from someone claiming to be from Visa. He also thinks it was a con-job.

We managed to have a laugh between ourselves, said our farewells, and I went to make yet another brew, this time of Glengettie. The tea had gone cold again. Tsk!

Still no signs of any Porcelain Throne requirements?

I went to make another mug of tea, Glengettie Gold. (I’ve a thirst on today?)

Went out in the balcony and took these three pictures of the parked cars along Chestnut Walk. Not many spaces available, I can’t see any, in fact?

Hello, Herbert’s giving me some more tip-tap knocking again. I wonder what he’s making this time?

The weather is looking a bit threatening. Might be storm clouds, but they are fast-moving in an Easterly direction.

By the time they turn to rain, the clouds might have moved to Skegness. Haha! 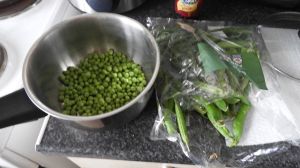 I’ll get some garden peas shelled methinks. Perhaps have a fishcake sarnie, peas and tomatoes later? Or not. A rough estimate of peas loss: 20 – Found or retrieved: 8. Humph!

Hell, Herbert! Give us a (swear word removed) rest from the banging and tap-tapping will yer! 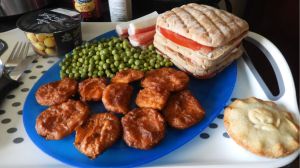 I  did the washing up, then for once, I eagerly got down in the recliner to watch some TV. The cause of this avidity was I could get the headphones on, thus not have to listen to Herbert’s tap-tap, clunking! I realised that getting to sleep was not going to be an option.

Within a few minutes, the landline flashed. It was the delightful Vampire Nurse Hristina, telling me she would be arriving to take my blood in the morning, twixt 10:00>11:00hrs in the morning. I thanked her and got settled down again.

An episode of Law & Order was starting. Then a summoning to the Porcelain Throne arrived. No rest for Inchy tonight! Krickus!

What a bloody affair it was! Much cleaning and medicationalisationing required. Cribblebogangonies!

I got settled down again. Praying for some rest, anything so precious as sleep would be a sweet bonus.

Ten minutes or so later, I could hardly believe it, the landline lit up and flashed again! It was the QMC’s Warfarin Anticoagulation and Deep Vein Thrombosis Clinic. The kind lady told me to take 2½ Warfarin tonight, and a blood test will be arranged for tomorrow. (I was getting a little confused and muddleheaded!) I thanked her and then pondered a while.

I’d taken 2 Warfarin already, so went to get a half a tablet to take. But, foolishly ended up taking the whole 2½ that she’s mentioned. Thus, I’ve have taken 4½ Warfarin now (I think?). Gragnankles!

Back to the £300, second-hand, c1968, not-working, sickeningly beige-coloured, recliner again. (The exercise will do me some good perhaps? Haha!)

Wrote some notes on the pad to remind me of evenings farce for this diary. Then turned off the TV, and with hopes of sleep, I covered my head and eyes with the thin quilt and then waited for Sweet Morpheus to arrive…

An hour later, having not being able to stop the Thought-Storming, I thought that turning the TV back on might help me get asleep. Ha!

I needed a wee-wee. Struggled out of the rickety recliner again, and to the wet room. Getting back, I gave myself as good a toe-stubbing as possible on the corner of the Ottoman. Granglespithowlations!

A sort of evening (and day really!) that I cou 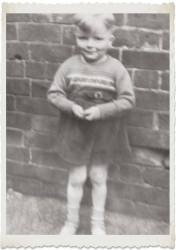 ld have done without!

And to think, a nearby neighbour, in Brookfield Place, two-up two-down terrace housing, right next to the railway viaduct in the Meadows area of Nottingham, nearly seventy years ago, a grand chap called Mr Wright, always used to address me as, ‘Lucky!’

If I’d known then, wot I know now… Hehehe!