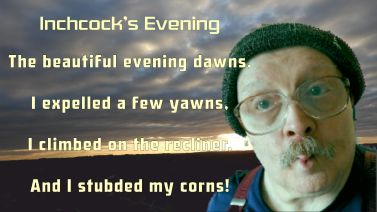 02:45hrs: I woke up with an astronomical vagueness all around me. It took me a long time to gather my distant, reluctant thoughts into some form of semi-logicality. Suffice to start arranging and forging some kind of recognisable sense out of them!

The distractedness of last night had not fully cleared away yet. The fuzziness began to clear, and be replaced with the worries, needs, and plan-making for today.

I realised that the new window cleaner was coming today, also that I had planned yesterday to get the kitchen cleared to give him access to the windows, and I had not done so! Fertummelt! This task became my priority.

I struggled out of the £300, second-hand, c1968, rickety recliner, grabbed the stick, caught my balance, and limped to the kitchenette. The most urgent thing was to get the window ledge cleared. Not an easy task, Dizzy Dennis was on the attack! For much of the time, I needed to use the four-

pronged metal walking stick, which made progress slow down to a pathetic level. Then, thankfully Dennis calmed down.

I was annoyed with myself when I saw the recycling bottles that I’d forgotten to take down with me yesterday! Clunk-head!

I took a snap of the window afterwards and tried to catch my reflection in the picture. Hehe! The bald head and the bulging flabby stomach tend to stick out a bit. I’ve just noticed when putting the photo in, how much the man breasts tend to protrude, too! Hahaha!

The summoning from the innards for my attentions being suddenly needed at the Porcelain Throne arrived. I wasted no time and beat a path (although a slightly wobbly one) to the wet room. Oh, what an improved, less painful session it was! It still hurt, of course, but compared to the last couple, it was heavenly! Also much quicker and not messy at all! Mind you, it left a pong that was not very pleasant. Ah-well!

Back to the kitchen, and got the Health Checks sorted.

Oh, ‘eck! The SYS had shot up again? The body temperature showed as just, ‘Low’. I made a brew of Thompsons Punjana.

Got the computer on, and had to make a head-top graphic, due to failure to make one yesterday! Humph!

I updated the Wednesday post and sent off the email link. Then made another brew, of Glengettie tea. (a thirst on me this morning!)

I took two shots of the morning view, the first in Aperture Priority, the second in Auto mode. I think the Auto one wins for more accurate colour?

Got caught up with WP comments, and then Facebooking.

I had a look on Amazon to see if they still had the cheaper offer on the Dettol lavender disinfectant. They had, but it said, ‘Only one left in stock, and unsure if any more will be available’. So muggins here, the favourite retailers type of shopper, ordered it. Then had a desperate last search for brown trousers available in my size. And bought some. I noticed an offer on Domestos. And bought some! Is there such a disease or illness called AGI, Amazon-Gullible-Idiot, I wonder?

Had a go at the WordPress Reader, then off to get the ablutions done.

: What a palava! After the two reasonable, indeed, good, last two sessions. It was back to the regular ablutioning experiences, with the Whoopsiedangleplops and Accifauxparing this morning.

No doubt about it, I was pleased to get out of there, and for the incidents to be over! Most annoying, especially as the previous couple of ablution efforts, had gone so well!

But, I was pleased I’d got a photograph of the artistic bleeding during the shaving nick bother. Do you think I might stand a chance of getting an offer from the Tate Gallery? Hehe! How the blood ran the route it did, I found surprising. Hey-ho!

A mug of tea, and back on the computing. 09:10hrs and no show from the window cleaner yet. Of course, this started me of twittering, fretting and almost convinced I must have got the day or timing wrong. (I’ve no confidence lately either) The chap arrived ten minutes later.

Did a quick,  efficient job, and charged me £15 quid for the windows and sliding balcony. Did a fair good job. Booked me in again for a month’s, September the third at the same time, I think he said.

Herbert above was doing some tap-tapping and knocking again. I wonder if he is making a wardrobe from scratch? As long as he’s happy. Which is saying something for a laconic taciturnist like John (Herbert) is, compared to an argle-bargle, deipnosophist type bloke, like wot I am! Hehehe!

I made up an order for Iceland and then did a search for a word that I cannot remember. It means someone who is not talkative or revealing. I wanted it to put in the paragraph above, but can’t find it. Gribbledukes! I might not, well, I do not know what the word, but feel confident I’ll know it when I see it. Tsk!

I pressed on with this blog, and the door chimes rang out. It was the postman, delivering my last pack of 6 long, lambswool socks (for winter, if I make it) I stupidly ordered from Amazon. They have soft diabetic top grippers. Now I will be alright for socks, anyway. I’ve probably got more than enough pairs to see myself out. So in the event of my croaking out, I’ve put them in the airing cupboard, for anyone who fancies them.

Got the oven on and put the smoked haddock flavoured fishcakes, in. I must remember to add the fries in ten-minutes. Then hopefully, they will both be ready at the same time, but, ‘best laid-plans’ and all that!

I got the latest figures for Covid-19.

Then I tended to the nosh making duties.

The sky was looking good, well, I mean the clods. Even if they were a tad on the dark side.

The fatigue arrived, a little late than usual, and I gave up on computerisationing and got the meal prepared.

And what the festival of a feast it was, too! The smoked haddock filled fish cakes were so moreish! The last of the truffle fries were used (Iceland no longer stock them, Boo!). The surimi stick enjoyed, The Piccolo tomatoes excellent, as was the egg mayonnaise! A well-worthy 8.5/10 for flavour-rating!

I got te pots washed, and settled down in the £300, c1968, unkempt, rusty, rickety, not operational, sickenly beige-coloured, uncomfortable, harmful to haemorrhoids, grotty recliner. Turned of the TV, and chose something to watch, and drifted off into the land of bliss within minutes!

I woke in a bit of the panic, the need for the EOGPB (Emergency-Overnight-Grey-Plastic-Bucket) was indeed urgent! The diabetes PMD (Pre-Micturition-Dribble) tinkled away well before I got the bucket! The SSPO (Short-Sharp-Painful-Orange) variety release was soon over, and off I went to the wet room to clean up, disinfect the bucket, and change the PPs. Walking into the doorframe as I went in. This right arm is going to have more bruises than ever! It’s already tender, just putting a coat or jacket on hurts. Hey-ho!

As I got back to the recliner to sit down, the right leg burst forth with an involuntary right leg Neuropathic Schuhplattler dance, ending up on my bum on the floor, banging the right arm on the way down, and in agony from Harold’s Haemorrhoids, and the leg just kept on kicking out for a minute or so. I stubbed a toe against the metal leg of the swivel chair!

Miraculously, no severe damage, just pain and frustration, oh, and the long-winded challenge of getting my humungously-large flabby-bellied body, up and into the seat!

I was sure the grey-cells would start chewing things over, and Thought Storms would arrive. I was so wrong! No joking… I nodded off, as Sweet Morpheus came, and slept for… wait for it… Seven-hours! Unbroken at that!