22:50hrs: Woke up wanting a wee-wee. (Nothing new there then!) The brain seemed to engage quicker than it normally does, and within seconds I was tugging dragging and humping my wobbly-bellied, oversized stomached body from the recliner, and got up, caught my balance, and visited the NWWB (Nocturnal-Wee-Wee Bucket). Only to find the complete opposite of yesterday morning.

Gone was the overly-keen, almost hosepipe-like jets of relief, replaced with a reluctant, trickling, splattering, spraying all over the place wee-wee! Worse, it needed a lot of pressure applied to start and keep the flow going? A bit of a hard job, painful, and took me ages too. But, at least there was no PMD (Pre-Micturition-Dribbling) or PMAD (Post-Micturition-After Dribbling). Whilst performing this act, I cheered up considerably when I remembered the mystery donator’s pain killers could be taken later. (Thanks again, whoever it was who helped me!)

I poddled off to wash my hands and other areas in need, then to the kitchen to get the kettle on. I took this snap of the now snow-free view from the can’t get at to wash, new thick-framed, dirty, light & view-blocking windows.

Started the Health Checks, and the Chinese manufactured Boot’s Sphygmomanometer reading, was fantastic! The SYS had tumbled down to 150. The DIA down by one and the pulse had dipped a lot, done to 89! Grrreat!

The Chinese made Harpin Xian Di contactless thermometer,  was again almost spot-on the button at 36.6°c in the green. I’m doing well this week with my body temperature readings.

I took the medications next, with the gone-cold tea. It was a pleasant experience, having the kindly-donated Zapain® to ease the Toothache Thomas, Cathy’s Cartilage and Ann Gyna, and it worked, too!

A grumble from the innards, and involuntary, endogenous passing of wind from the rear end, had me abandoning things on the computer, and hastening like lighting to the wet-room in need of the Porcelain Throne. Well, I mean hobbling to the wet room, then!

Another change from yesterday’s visit. I got down on the raised seat, and things would not start, but splatterings and wind were coming straight away. I had a go at the crossword book, no sooner picked it up, and the movement began. Another big-dollop, sticky, gooey and

messy in the extreme!

The cistern did not clear things after the third flush. It took three or four hand refills to do that, and ‘bits’ were still coming back up? I spent ages cleaning up. What a Pallava it was! 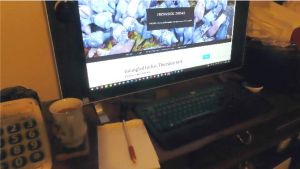 Back onto the computer, and uploaded the photos from yesterday and this morning, to CorelDraw. Readied them for the blog, and opened WordPress. Made a start updating the Wednesday diary. Got the update finished after a few hours, and I made another mug of Glengettie.

The morning view, photographed from the light & view-blocking kitchenette window, made eerie pictures.

I Pinterested a couple of pictures, then sent the Email link off. Then caught up with the Facebooking. Perused the WordPress Reader Section, some brilliant photos on there today. The ones from Tim Price in New Mexico, are well worth a look, here’s the link:

Then I thought about my coenaculous desires, I and got some breakfast made.

I could have a look at the new Lockdown instructions at the same time, perhaps. But plans got delayed when I picked up the multiple 4-four sheets to have a quick perusal off.

By the time I’d read one page, and started on the other side of it, I’d forgotten what I’d just read before! However, I persevered and managed to read all of the pages.

No Smug-Mode, though. Cause I reckon only about 10% of the content actually sank in. Most of what I read I’m already doing!

The wee-wees are far less often than yesterday, weaker, and more dribblier!

Ah, well, washed the pots and off to get the ablutions done. 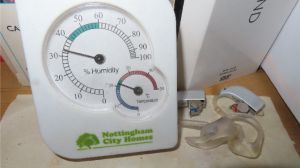 I noticed the, I’m not sure what you call it, a monitor for temperature and humidity gadget, shows the humidity as further below the green zone, and it got worse later, down 10 points under? I’ll take a look at Google, see what comes up.

I meant to do this

yesterday but forgot to. Hard to believe, me forgetting something, I know. Hehehe! I consulted Mr Google about humidity monitors, and I got this piece of advice? American, I assume.

I rechecked the emails, and I ended up

looking at this morning’s Your-Area E-magazine. I found some bits scaremongering and of mild interest.

This photo of the Metro front page is scary.

All the other newspaper were offering hope that he Coronavirus is slowing down, and asking ‘Can we hope that it is under control?’

This was found on the Nottingham News site. Cheered my up a bit. I’d like to know how the student paid the fine immediately? Must have been a foreign pupil.

Years ago, when I was working in security, I was sub-contracted to work at Nottingham Trent University. End the end of the first working shift (Nights), the mail arrived, sacks of it, and I was to put in the respective cubby-holes. One parcel for a Chinese student, it was brick-sized and crammed full of paper money arrived. On the label, was a note stating that the contents’ total value was less than £2500. Just a memory triggered.

I went to make a brew of Glengettie, and the weather had changed a bit from earlier. I’m sorry I took it now, it was freezing out there! It must have fallen while I was doing the lengthy ablution session. Haha! It put me off going anywhere even if I could.

An hour or so later, I went into the kitchen to check on what to have for nosh later on. And the fog had descended now, it got worse later.

I made up a couple of graphics for future templates, on CorelDraw. I could feel the weariness coming on, so I tried to rush a bit.

I got the meal prepping started. Took the evening medications. Very early in the day, for I was wearied beyond belief, I got the nosh served up.

I’d taken the cheap Hubbards (Sainsbury’s generic name) bacon offcuts, that was 300gr and just two thick slices of gammon, and cut off the mass of fat on it and into the oven. Chopped tomatoes in the saucepan. Added two part-baked rolls later. Some grapes, mousse and a mini chocolate cake.

I feasted and wallowed in it! Everything came out well, the bacon surprisingly so.

A flavour rating of 8/10 was given. I ate slowly to allow things to digest, and after finishing the nosh, fell asleep, with the tray balancing precariously on my mountain of wobbly-fleshed rotundish stomach!

I woke an hour or so later, and wondered how the heck everything had managed to stay on the tray, and nothing fell off of fleshy tummy?

With difficulty (Cathy Cartilage), I stood and took the tray for washing in the kitchen sink. Then returned, blurry-eyed, to the £300, second-hand, c1968, cringingly-beige-coloured, not-working, rickety, incommodious, grotty recliner.

The landline flashed and chirped. The struggle out of the recliner again was not easy with CC so stiff and painful, but I got there in time somehow. It was my Vampire Nurse Angel, Hristina, to tell me she’ll be coming on Monday, between 0900 > 1100hrs. I thanked her, had a rare wee-wee, washed, and got back down in the c1968 recliner.

To my consternation, sleep did not easily come to me, how, with feeling so drained, I didn’t know. So I put the TV on – that cracked it for me! The first set of adverts came on, and off I went, to join Sweet Morpheus!