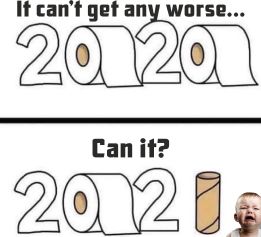 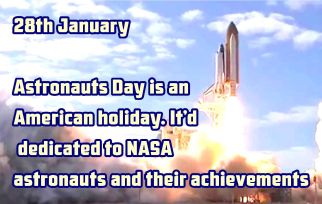 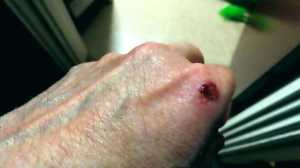 00:30hrs: I woke, and spotted spots of blood on my bulbous, heavily ladened stomach, jammie-bottoms and the recliner arm? I got a tissue to wipe the wound, but it didn’t seem to want to stop bleeding. So, I dismounted the recliner to catch my balance.

The need for a wee-wee caused me to stop en route to the wet room, and I utilised the overnight bucket—a strong effort this morning, of the FBL (Forceful-Blasting-Lengthy) style. I cleaned the knuckle and applied some Germolene. The flow continued, so I had to use some Daktacort on it. That woke me up fully! Argh! But it worked, and the bleeding was stopped completely within a minute or so. It was a good healthy looking deep-red, mind you) 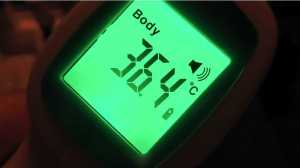 Then I got the jammies, and my red-spotted belly cleaned up. Wide awake now for sure! I got the kettle on, took the medications, and did the Health Checks. The body temperature was just fine again.

I took the morning medications.

Utilising the Boots Sphygmomanometer, manufactured by, ZDEAC (Zhongshan Daguan Electrical Appliance Company Ltd) in Guangdong, China, the SYS was down a bit on yesterdays reading, at 163.

I observed that the NCH (Nottingham City Homes) provided monitor, had better readings this morning. Humidity and Room Temperature both nearly in the Green!

I got into updating the Thursday, no, I mean the Wednesday blog. A few hours later, I’d got it finished and posted off. (Somehow, the photo I took of the terrible tasting meal, was lost into the ether from the SD card… again?) I Pinterested a couple of pictures. Then went on Facebooking. Then, I went on the WordPress Reader section – so few new posts came up. Is there a problem? I don’t like the idea of missing some of the blogs. Mmm!

Opened the WP comments, and lots had come in, I like that. I read and replied where I could.

A summoning of me to the Porcelain Throne came from the innards. I didn’t mess about, and made my way to the wet room – musing en route to myself; “What will this visit be like, a Trotsky Terence or Constipation Konrad victory? I got in and sat on the raised seat, and I felt that ‘things’ wanted to activate, but only ‘Phut-phuts’ of wind were managing to escape. 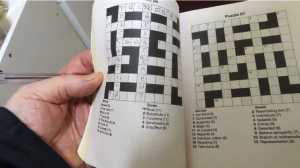 I grabbed the crossword book, in expectation of a struggle ahead. This crossword I was looking at was a lot harder than the others in this book. I’d been stuck on it for days. I got one answer, and I felt hopeful about this, leading to more success, but no!

The motion moved, and a massive ‘never passed one as big in my life’, proceeded to escape. Very little pain, or even discomfort, only at the beginning, not messy, Harold’s Haemorrhoids were not too bothered by the monstrosity and no bleeding from anywhere! 👍

👎 But the sheer volume of the single super-sized, torpedo-shaped evacuated product, convince me that I would have to flush the tank a few times to get in down the tube. I wasn’t wrong! After a couple of refills of the tank and five or six flushes, it was cleared. Phew! I felt all worn out by the time I’d got it sorted, antisepticated the contact surfaces and washed my hands.

04:00hrs: This calls for a good fresh brew of Glengettie. Off to the kitchenette.

I noticed it was not raining, and decided to take a couple of photographs to the left of the window. 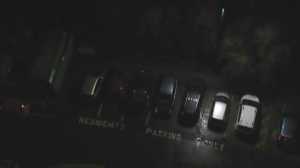 The nest one, a view straight down onto the Chestnut Walk car park.

As I was taking the second picture, weirdly it was as if someone had just turned up the volume up on the dreaded ‘Hum’. Grrr! Wikipedia suggest the possible causes as; Mechanical Devices, Tinnitus, Spontaneous otoacoustic emissions, Jet stream, and Animals? One conspiracist blames the Russians, see the Hum Locations below. Hehe! 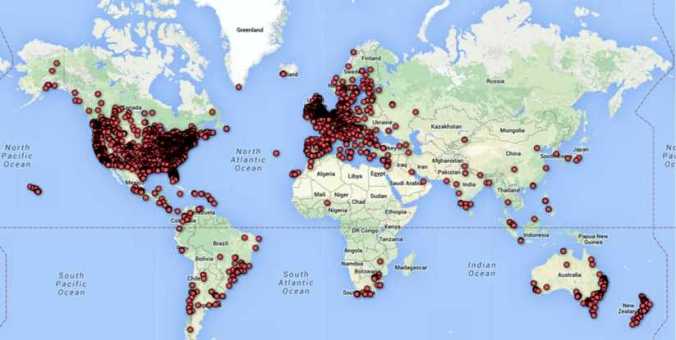 I got carried away and side-tracked there, sorry.

I got some mushrooms in the crock-pot, and added some Squid vinegar, chilli powder and sea salt, left them to marinate. I’ll turn them on later, providing I remember, of course!

Made a brew of Glengettie, and returned to the computer.

I opened the latest YourArea magazine to see if anything worthwhile mentioning was on it, and the Coronova figures.

Testing stations report said that: 496 People tested positive got Coronavirus in Nottinghamshire in the last 24 hours. It’s all very confusing, and not over yet!

I sorted a little brekkers for myself to nibble. Last of the pork & mushroom pâté, small tomatoes (salted), and the Milk Roll bread last.

Ablutions, next. Off to the wet room. The teeth cleaning was a bit painful, only three dropsies, though. But I’ve had worse.

👎 The shaving was annoying, I had a combined attack from the ailments. Those being, SSS (Shuddering-Shoulder-Shirley) and NN (Nicodemus’s Neurotransmitters), well three actually, who made sure the dropsies while shaving added up to at least ten! I got fed-up of bending down to retrieve the razor, BPB (Back-Pain-Brenda) stinging at me, and then literally involuntarily throwing the razor away again! The picker upperer was utilised after the third dropsies! 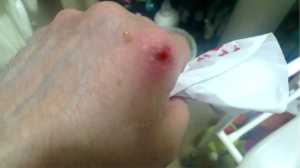 👍 A much easier showering session. No banging into anything, no dizzy spells, only a couple pf dropsies, and free of toe-stubbing – Yee-Haa!

The burn on the knuckle was weeping as I dried off, leaking a tiny bit of blood, but

nowt serious. The Germoloiding of the piles stung a bit. The embrocating and rubbing in of the Phorpain on Arthur Itis’s knees and

The Daktacort application to the fungal lesion was as is usual, damned painful! But it had to be done with the bleeding yesterday. If I missed doing it and it started again overnight, I might be in a medical pickle again in the morning. I’m going to give it another go tonight before I settle down. I shudder at the thought of doing this ailment treatment.

As I was doing the deodorantisationing and looked in the mirror (Some I try to avoid, nowadays!) I spotted what assumed was a bit of fluff from the towel on the top of my head. I tried to pick it, nope, flicked at it, nope, no movement… ran the scrubbing brush over my dome to shift it… then realised it was not a bit of fluff. Hahaha! What is it is a mystery to me? Why and how would a spot appear within a few hours that was not there five hours ago? Mmm?

I just hope that it doesn’t spoil my young, masculine, attractive features that the ladies love so much… Oh, alright, sorry!

I went and sat on the £300, second-hand bought, c1968, sickeningly-beige-coloured, uncomfortable, rusty, whiffy, not-working, uncomfortable,  rickety recliner, to enable me to use the long shoe-horn get the slippers on.

It was a bit of an awkward manoeuvre, but after some wriggling and fidgeting I got them on. Then felt the of lump underneath the thick quilt that I was sat upon… Oh, dearie me!

It was the wholemeal sliced loaf of bread I couldn’t find last night, Tsk! Nicely crunched up and reshaped now. Hehehe! It could happen to anyone… but maybe not?

I remembered the mushroom marinating (not than I’m sure mushrooms do marinate?), and I got the crock-pot turned on auto.

That is supposed to get it to boiling, then go a keep warm, I think.

I also noticed how my yarmulke was looking a little well worn. So I hand-washed it and hung it for a few weeks to dry, hanging over the sink’s side, on a strainer.

I did another hour or so on the updating of this blog. It was a grind, hard work and frustrating. SSS was the main culprit. Her attacks were all of short-duration but, persistent. I reckon I made more mistakes, and probably missed many them, more than I’ve done for ages.

time, as my arm jerked, I got a full screen come up, with warnings galore that I didn’t understand were about, but no option to do anything, Cancel – Close or the likes.

I closed down the internet, and opened it again… things seem to be working? Tsk! Then on CorelDraw, the programme closed of its own accord in the middle of me working on PNG graphic?

I left it a minute or two, and then I reopened CorelDraw, I’d lost all the work done and had to retitle the name to save it… more memory lost! Oh, dearie me!

Closed things down, silently cursed under my breath and forced my tired body and wearied mind to get the nosh sorted out and served up.

I’d hoped to share the grapes with Jenny, Doris and Frank, but now so glad I didn’t, needed the bad ones picking out before going on the plate. Eurgh! Still, I enjoyed the cold meal. Taste Rating was 7/10, but each grape had to be inspected before eating it – tow found with fur on them. I’m a lucky so-and-so!

I washed the pots, checked everything was off, lights, stove, faucets etc. and as I was about to go to the recliner to settle down (albeit early, even for me) to search for Sweet Morpheus. I heard a clunk coming from the hallway. It was the NCH Newsletter, and the ‘Lounge Pants’ from Amazon, via the Royal Mail.

I put the magazine on the ottoman, got into the pants and down into the recliner, and turned on the TV. The Thought-Storms invaded within seconds.

Once I dropped off into the land of kip, again I kept springing awake repeatedly, horrible night.