01:15hrs. I stirred awake, and fought off the depressionalistic mood, lingering from yesterday’s calamity of the power-cut, and the ensuing problems it gave me. I pondered on what I could do about the weekend meal for Josie. After some consideration, I decided that I will not have the time to get down into Sherwood to get some potatoes and back again. I tried instant cheesy mash with added onions, well burnt in the oven after mixing, a couple of weeks ago, and Josie said she enjoyed it, as I recall. So I’ll try that again. This should give me time to get the blog updating done, and maybe some photo adding and TFZ Facebooking as well.

The wee-weeing needs arrived later than usual. They normally come within seconds of waking up.  I escaped the warming but uncomfortable grip of the second-hand, £300, c1968, rusty, rickety, grotty-beige coloured, sometimes working recliner, got my balance quickly enough and a few paces to the surprisingly well filled overnight EGPWWB (Emergency Grey Plastic Wee-Wee Bucket), and had a releasing of a WYSAOWW (Weak-Yet-Spraying-All-Over-Wee-Wee).

During the emptying of the bladder, I got a sensation that I imagine is what myiasis must feel like; worms wriggling about from the innards? It stopped along with the termination of the process.

I took the bucket to the kitchen and got it emptied and sanitised. I returned to the Junk-Room-Two, and as I was struggling with the sock-glide, I noticed how odd the right leg looked. It doesn’t come out well in the photo I took. But I seemed to have many extra spider veins on show above the knee. It reminded me 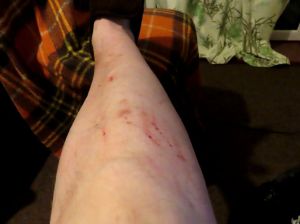 of an old map. Haha!

Then I spotted signs of some nocturnal itching on the lower part of the leg. I cannot remember scratching at it at all. As indeed, I cannot recall any visits to the Emergency Grey Plastic Wee-Wee Bucket, that was so full this morning.

Perhaps one or more of the blood papsules had burst. Then again, there were no signs of any bloodied paper towels about or in the bin, anywhere? Mmm!

I did the health checks, DIA 74, SYS 58, Pulse 91 and Temperature 34.2°c. Took the medications and made a brew of tea, and took it with me to the computer. Only to find that… once again.

It came back on, but it was so slow. This happens so often nowadays with Virgin Media, and is so angrynoying! Humph! 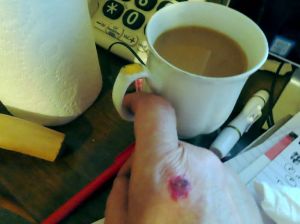 I spent such a long time sorting the flipping internet out and working in a fashion again, the mug of tea went cold on me!

I popped back to make another brew. While the kettle boiled, I had another wee-wee. This time of an ELDOP (Extra-long-Drawn-Out-Persistent) mode. Another change in style. I don’t know what to expect each time I utilise the

I took a ‘blind’ picture out of the new kitchen windows. That is light & view-blocking, have glass that cannot be reached for cleaning. camera-hating wide ledges that make it necessary for step-ladders to be used and fallen off of, to take a photo below, or look to see if any emergency vehicles are outside, in the rare event that I can hear the fire alarm when it activates. Incidentally, I can’t hear the new intercom either, when someone calls to be allowed in. This might be fun on Tuesday when the INR nurse is due!

When I got back to the computer, Colin Cramps paid me a visit and stayed for a while distorting the muscles in the leg and foot, and testing my pain-resistance almost to the full. Being in such pain, reminded me about yesterday’s Porcelain Throne agony, and I fetched and took an extra Senna tablet with the tea.

Next time the wee-wee was back to the ELDOP (Extra-long-Drawn-Out-Persistent) style. In the time it took to pass, the morning had gotten lighter, and my moustache grew a bit. Hahaha!

Somehow or other, I avoided psychasthenia, putting up and coping with the jumping about fingers, and shoulder, and Mr Fries best efforts to knacker my plans, I got the updating finished and posted off. Phew!

I found myself chatting away with Koala Katie and Scruffy as I was carrying my next visit to the bucket. Another change in style again. This time it was a WYSAOWW (Weak-Yet-Spraying-All-Over-Wee-Wee).

It’s a good job there is no CCTV camera in the flat while I am talking to the pets. Hehe!

Got the ablutions done. There was a programme on Radio Four Extra. It was the last radio programme ever, to get more listeners, than anything on TV did on the same day! The science fiction programme was written by BBC producer Charles Chilton. From 1953, when it was broadcast on the old BBC Light Programme, which became BBC Radio Two. By gum, it took me back listening to that while I shaved and had a shower!

I could see the back yard at Brookfield Place where Dad and I lived at the time. His homemade cobbling bench out in the yard next to the railway viaduct, the tin bath up on the wall next to the yard-brush, the pigeons and sparrows swooping down for the food Mrs Wright gave then each day, the sparrows being too quick for the pigeons. The outside toilets and coal houses. Poor Mr Holmes, Chrissie and Rover. Ah, we had nowt, but it was a good life! (Well, not really, but it sounds it). Hehe!

I called at Josie’s, to find out what time she fancied having her meal. But no answer.

I sent some pictures to the Pinterest site, then got on with this blog. After a while, I nipped to see Josie again, no reply.

Back to the blogging for an hour or so, then called on Josie once more. She heard the chimes and answered. We had a doorstep, rumourmongering, tittle-tattle, conversation. She let me gripe on about yesterday’s mayhem. She’s been out all day, and knew nothing of it, but was sympathetic, bless her. She does not want any fodder today, she is going out with her Sisters, but tomorrow at 12:00hrs will suit her fine. So it will be! Farewells and back to the computer to update to here. Then, onto TFZer and Facebook photo galleries updating. 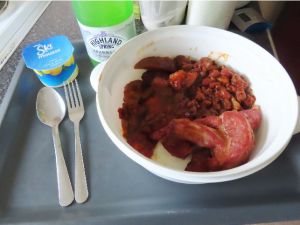 The nosh was prepared. I purposely used the old large plastic dish, as the hands and fingers, well, the shoulders and leg as well, were making frequent performances of dancing, jiggling, stamping (the leg) and shaking. So I thought I might cope better with the big bowl, in the event of there continued unruliness! I find it harder than ever to manage when I am feeling so exhausted. The flavour was not so good with the bacon, but the chilli-con-carni was delightful. The overall rating was 5/10.

I put on a Jonathan Creek DVD. After several dropping offs and wakenings, then I gave up. And it was early even for me. But the lack of sleep over the previous disastrous few days, I thought I might be too overtired to sleep – but no. I was off in the land of nod, dreaming a lot, but sleeping for over six hours! Great!