Started laptop, made cuppa, then WC.

Got me bag ready with the Nottingham Hospice things in, then I did some work on posts for the blog.

Shave: dropped me razor and broke it, so I used a throw-away one, wash, teeth done, cleaned tootsies and glasses, changed bandage (Must remember to get some more soon), applied me creams and pain gel.

Set off on me walk to Sherwood Nottingham Hospice Shop, nice day, hope it doesn’t bring out the yobboes… crossed fingers.

Gave em me bits at the Hospice shop, and caught the bus to town.

Got some bread to feed the ducks with, and caught bus to Derby.

Fell asleep on the bus, bus only for a moment or so.

The Derwent riverside had loads of folks, dogs, mobility scooters, and yobs around, and hundreds of ducks. I observed the mallard ducks were getting a bit nasty with the immigrant giant Canada geese in their fight to get to the food being thrown to them. I hope Campbell doesn’t hear about this? There seemed like thousands of pigeons in the melee. I forgot to take any photographs though. (Huh!) 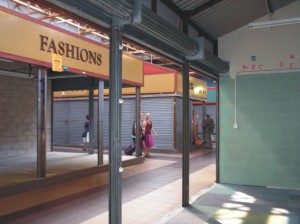 Had a walk into the Eagle shopping centre market: Dead as a dodo in there, and even more stalls closed down. Mind you, there was still the Mad Mobility Scooter driver danger ever present.

Had a walk about for a bit, then I caught the bus back to Nottingham. I got on the one that takes the round-

about route so I could enjoy the scenery for a change. But fell asleep before it got to Draycott, a very kind lady woke me up at Beeston… I felt such a fool!

Dropped off in the city centre, and called onto the Chinese Food Shop and got another pack of the vegetable nibbles, as i like the last one muchly. The girl in the shop is I think, falling in

love with me; she ignored me far less viciously than she did yesterday!

Dropped off the bus thinking I’ll call at the GP while I think of it. A chap stopped me and asked for directions to the City hospital, no problem for me, so I gave em to him. Then I walked home forgetting about the GP again.

Made a cuppa then updated this tosh. So tired now.

It felt like I’d had a different bad dream each time, but I could only recall bits of the last one;

I was leader of the country; I stopped production of all nuclear, atomic, nerve, gas and germ weapons, and ordered that they be buried as deep as possible underground, but with a failsafe detonation system attached. I held a meeting at 0930hrs and told the world that if they do attack us, we would detonate all of our weapons underground, and this would destroy the entire planet! At 0938hrs the first missile landed in Stalybridge. At 0942hrs, I detonated our stockpile, and found myself along with everyone else, in the queue at St Peter’s gate… not sure hat happened then.

How I can remember the times is amazing, yet I forget so much other stuff that I’m sure was in the nightmare? I’ve vague memories of George Osborne being in the nightmare somewhere?

Got down, started laptop and made a cuppa, took medications.

Blogged for a bit and did some graphics ready for later use.

Got me things ready for the launderette, and set off.

Got the machine going after the big gal on duty today made a fuss of me… well she said “Good morning”.

I got the togs in the drier when the washing machine had done its bit. And walked over to the GP to fetch me prescription. I got a rollicking for not replying to their Email giving me my new medications dosage.

I humbly apologised and told them I would not let this happen again. Then gave them some nibbles to eat.

Went over to the chemists, handily located next door to the launderette, and got me prescribed extra pain killers, gel and dermatological cream.

Back to the launderette, and got me Spike Milligan book out to read.

Folded the togs into the bags when they were dry enough, said farewell to the big gal in the launderette, but she was on the phone and didn’t hear me like.

Got home (Using the term in its loosest sense), put me togs away, got me Nottingham Hospice bag that I prepared earlier,

and set off on a walk to the Sherwood.

Noticed some nice old cars parked up on the way, looked like they’d been parked up for years.

Arthur Itis was causing extra bother in me left knee this morning.

I called in Wilko on the way, to see if I could get any microwave plates and dishes – couldn’t find any though, but I did get a cheapo can-opener to replace the one that collapses while I was using it last night. (Curried beans all over me and the floor… Tsk!)

Got to the Nottingham Hospice Charity shop, and the girls there thanked me for the donations and nibbles wot I took ‘em. Bless ‘em. 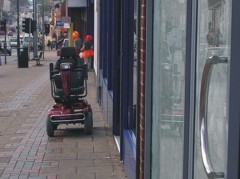 Crossed over the road, and called into Holland’s to get some pistachio bars, but didn’t have any in, so I didn’t.

Noted a mobility scooter parked outside the bookies, gave it a wide berth!

I was limping a fair bit now, as I passed the Police contact point on the 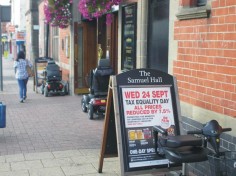 other side of the road, where the burglar alarm was going off. No chance of catching anyone there as the police only occupy it for two half days a week.

Further along I passed the new pub, there were three mobility scooters outside of it; glad I didn’t pass it later when the drivers were staggering out and putting lives at risk by driving em in an intoxicated state! 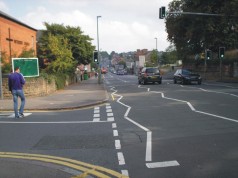 Where I had me dizzy spell

Got near the top of the hill, and suffered a few dizzy spells. Realised I’d not had me hat on for about half a mile, so put it on, despite looking a twit in the warm sunshine. The spells stopped after a few minutes, and I continued the walk back to the dump.

As I turned the corner into my street, a bloke with two bull terriers walked past me, neither had a lead or muzzles on. I could see a fight taking place between two women at the far end of the street… so nice to get home innit?

I got in, WC. Laptop started, made a cuppa, and couldn’t find me cheapo tin-opener?