I hope the Ale tastes better than it did

The mates I used to go on holiday with were: Bill Bates, and Jock Kirkpatrick, and

We’d rented a cottage in Lockerbie for the week, feeling assured that Jock would be able to show us the places to find the best fishing.

We filled up the Austin J4 van with the fishing tackle, baits, and fodder we thought we’d need and set off in the van, the box that Ken dropped on me foot didn’t cause too much bruising.

Ken was driving first, then I did for a bit, then Ken took over again. We got just over the English/Scotland border before we got lost.

We arrived (2 hours after the ETA), found the owner, and ensconced ourselves in the cottage.

We agreed I’d do the breakfasts and snap, Jock would do the evening meals, Bill would do the cleaning, and Mad Ken would do the driving. Nothing if not democratic we were.

Next morning, after breakfast, we went on a recce to find Lochmaben to suss out the fishing.

We asked a local resident, sat on the verge with a bottle of Iron Brew, which direction the Loch was in, and we think he said, “Right straight up the hill, carry on, it’ll be on your left!” 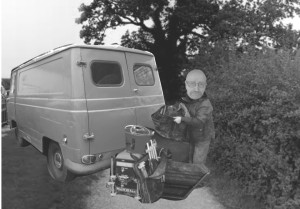 After about five miles, with no sight of Lochmaben we thought we must have passed it somewhere, and spotted a chap ambling along the lane, we stopped and asked him.

His reply was double-dutch to Bill, Ken and I.

As we drove off none the wiser, and asked Jock for a translation, and he said he’s no idea what he was talking about either, he was born in the Outer Hebrides and couldn’t understand what the man was saying any more than we three Sassenachs could!

Something that none of us caught all week! Huh!

We got the map out, and decided to carry on to Motherwell instead. A further ten or so miles on, we saw the sign for the Loch!

After five days fishing the four of us had yet to get a bite, let alone a fish, and was out of pocket on the bets.

We found a pub called the Midland Hotel out in the wilds, and visited for a pint and a game of dominoes. The landlord came from Derby. At ten o’clock, he told us to go into the bar side and drinking will continue in the cellar!

And he was serious.

Sure enough, at ten o’clock we went into the absolutely packed out bar, and within a few minutes, everyone was filing through behind the bar, and down the steps into the cellar, which proved to be a fully equipped bar, with tables chairs, and piped music!

Around about midnight a pair of legs appeared walking down the steps from above, they were wearing black boots, and a black pair of trousers… as it came down, it revealed the bottom of his tunic, his torch, and the shiny buttons on his uniform – yes it was a police officer.

But no, he spoke to no one, just walked to the bar and grasped the pint that had been poured in silence for him, belched, turned and disappeared up the steps. Amazing!

The electrics played up on the van, and with Mad Ken the only one with any knowledge of the engine and mechanics of vehicles, he toyed with it for ages, and sure enough, he got the lights back on. No indicators, but at least we could see where we were going.

My turn to drive us back to the cottage, and I tried to followed the three sets of verbal directions being given me, while attempting to read the map and drive the van.

We set off, and in the middle of the wilds… splutter, jump, jerk.. stop! We had ran out of petrol, but the fuel gauge read half full, the electrics playing up again?

The lads kindly elected me to walk to the village or whatever it was we could see in the distance. It took me about an hour to get there, there was three cottages, a big house, and thank heavens a garage! I enquired if he could assist us, and judging by his body language (I could not tell clearly what he was actually saying with his accent), he wanted me to join him on his Land Rover, and we went to the lads waiting in the van.

We wus fed well at any-rate!

We were towed to the village, and the chap had a look at the van, and decided spare parts were needed and told us he could get them in a few hours, and then it would take about 2 hours to sort the panel out.

He kindly said we could pay his missus, and she’d provide a meal for us while we waited, and led us to one of the cottages. As we walked down the path to the house, the door opened, and the man’s wife ducked to get through the door, and came out to greet us.

She was about 6’5″ tall, muscular, wide, and scared the shit out of us. But needs must and we went in and settled in the front room, while she conjured up a meal for us.

She came back in with a massive plate for each of us, fully filled with fodder. The only thing I could recognise in the offerings, were the tatty-scones, as for the other nourishment on the plate, well I’ve no idea, but it tasted okay to me.

That cost us nearly all of the money we had left, still we were going home now.

When we eventually arrived back in Nottingham, I dropped Bill and Mad Ken off, then took Jock and myself back home. (Jock and I lived in the same terrace of two-up two-down hovels)

The house had been burgled in my absence, and there was three bills lying at the foot of the letter box than needed paying!

A disappointing holiday to say the least. 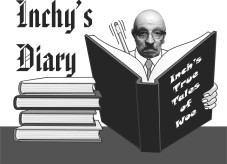 A few springing awakes, in response to bodily calls for the WC overnight. I forced missen up at 0445hrs. Blood all over me lower regions again, I wus a bit concerned for a while, but it stopped after a little attention.

I spent so long trying to sort out me Coreldraw problem, again without the slightest hint of any success. It’s all beyond me yer know.

Not so good this morning, angina very bad and dizzy spells rampant, may have to go see the GP methinks.

I was up at 0505hrs after another night of nightmares and WC visits. Juan is getting fed up with this now.

Hard to concentrate this morning.

Cuppa, WC and laptop started. Had another go at trying to find out what was the matter with Coreldraw9, but not knowing what I was doing didn’t help at all.

Beautified myself as best I could, washed, teggies, shaved, clean togs etc, and got things ready for my hospital visit for Warfarin level tests.

I set off to take some things to the Nottingham Hospice Charity Shop, (DVDs togs and cutlery).

Got as far as the end of the street, then returned to put me hearing aids in. 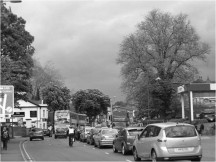 Set off again… then returned to the hovel to retrieve the bag of stuff for the Hospice that I’d left when I returned to put me hearing aids in… Tsk again!

Hobbled into Sherwood to the Hospice shop, (Bit of traffic about this morning) then caught bus into town and went into the pound shop for a gander. 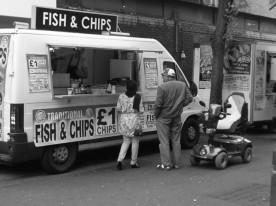 Got some desserts to add to the things for the nurses treats at the Queens Medical Centre Haematology dep’t. I like to treat em and make em smile yer know.

When I came out of the Pound Shop, I came across a Greek chap selling fish and chips from his van, and a Mobility Scooter driver, who had left his scooter in the middle of the avenue, and was busy stood

there digesting his nosh, while others had to walk around his deadly scooter, and cars had to wait until he’d finished his nosh. Amazing really innit?

I caught bus out to the QMC, and saw a sports car that had left the road and ran into a wall. Emergency services were there.

Dropped off the bus, and wandered up to the entrance – to find that yet again the fire alarm had activated, and a mass of bodies: ambulance team members, patients who had nipped out for a fag in the No Smoking Area, out-patients, visitors and, judging by how many shoulder-charged me as they belted passed me when we were allowed to enter, Olympic sprinters and rugby players!

I hid in a corner and let em get through, then hobbled in and got me ticket. All done in five minute of entering the dept, I limped to the bus stop and caught a bus to

Bulwell – in the hope of getting some more Microwave sausages and any other cheapo offers. But, there were neither available.

A mobility scooter personage drove passed a stall and knocked some stuff off the display – he never paused at all, just drove on to scare someone else…

But at least none of the deadly mobility scooter drivers got me today.

Back to the bus station, and caught bus back to the hovel.

When I got in and settled, the yobs appeared on the street… so I went upstairs and got me head down early.