0205hrs: Woke up and found scribble on the notepad about a dream I had earlier. Seems a bit disorientated but this writing is all I had to go on: Dead, not unhappy… searching for someone to talk to. Found hundreds in a long queue… none would speak to me, all feeling sad and missing friends and family – felt sorry for them… Started playing hopscotch in the hope they would join in and cheer up; they lifted me and threw me down a builder’s rubbish funnel… I landed on the recliner in the flat, minus a leg, but had a wooden stump painted in red white and blue? Odd!

The ailments this morning were mostly very kind to me. Only the Inchies Lesion and Harry Hernia were any bothers. I sat there pondering, clutching for something I knew that needed attention today, but the grey-cells must have been still asleep. Irritating this is.

Eventually, I removed the unwilling bulbous body from the £300 second-hand recliner and off to the kitchen to do the Health Checks and take the medications etc. I noticed that the pulse was slowly getting lower? 100 – 92 – 84, now 81. I hope the battery isn’t running out inside the ticker? Hehe! 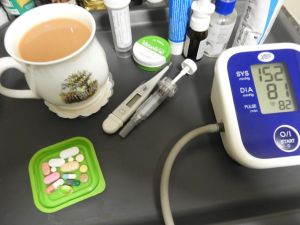 Made a brew and quaffed the medications.

I had used one of the Assam tea bags this time and left it to stew and brew for three minutes before drinking any of it. Very nice! But I had to let it go cold, as the innards abruptly started churning and rumbling, and off on an urgent mission to the Porcelain Throne room!

A terribly tricky and long messy affair. Haemorrhoid Harold and Inchies Lesion both bleeding, compounded the tortuous, yucky, disagreeable situation even more. By the time I’d sorted and cleaned everything after the evacuation, and got back to the kitchen, the mug of tea was stone-cold!

I brewed another mug of tea. The Twinings Extra Strong Old English this time. Another great tasting one.

Got the computer on and finished off the Monday Diary, then started this one going.

I got as far as here and then had a perusal of the WordPress Reader. Some great posts on here, today.

0510hrs: Made another brew and went on Facebook, a lot of catching up to do on it required to be done.

Had to finish a little prematurely, to get the ablutions tended to. The shave and doing the teggies went alright, but it was a wretched medicalisationing session. The shower was grand.

I took the black bags to the chute on the way out.

I doddered down to the Obergruppenfurheresses Hut, the feet we soon hurting, but the ailments were all, each and every one of them being kind to me! The EQ was worried and, apprehensiveness about this incredible event. Hehe!

In the shed were about eight tenants, all keeping warm while they awaited the arrival of the bus. Outside, stood six smoker-residents at the stop.

Those residents inside were given the story of my farce with the jacket zip from yesterday. Nice to see them laughing. I listened to the gossip of the day, and we all went to the request stop together. I must say, I’ve never seen so many folks at the flats get on a bus before.

I, along with three others, got off the bus at the bottom of Winchester Street Hill. Turned left on Mansfield Road down the incline and visited the Continental Food Shop. Made my way straight to the cooked meat counter and bought three slices of Polish roasted pork. Then to the bread section and got a small slice loaf. They are expensive at £1.59 for 400g, but they do taste wonderfully satisfying. I had a walk around the 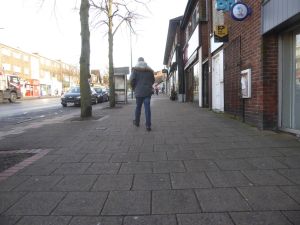 shelves and purchased a can of beef and vegetable stew. Paid the man and departed up the hill and to the Wilko Store.

Where I have to admit, I got carried away repurchasing things. I spent a long time pottering around but got some things that they were out of last week, while they had them in stock. Washing Fabric Softener and Two Fragrance Enhancers, both scented with Freesia & Y-Lang, which I find very pleasant when used in the laundry. A Lemon scented floor cleaner liquid. Anti-bacterial Lemon-impregnated floor cleaner sheets.

I got a call on the mobile while walking up the hill. Nottingham City Homes to tell me they are calling on Thursday to have another look at the Strobe and Pillow Alarm.

I called in at the Dentist Stalag Surgery to confirm my next appointment date and time. But came out after seeing the length of the queue of fellow patients at the desk. This was the reason for my withdrawal; combined with the coughing and sneezing from the people and the intimidating scowls from the receptionists that indicated to me they would be happier if I sodded-off. So, I did! 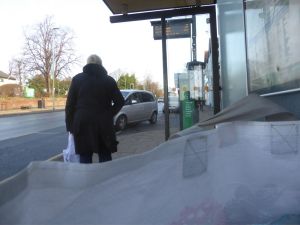 Up to the Sherwood bus stop. The board indicated it was 20 minutes past the hour. The L9 bus being due at 27 minutes gone the hour, I thought I’d catch it. But no, of course not!

I waited until 38 minutes past, then started to walk it back to the flats. A touch confused at this.

I took the route over the hill, down to the gate and up through Woodthorpe Grange Park.

Apart from the heavy weight of the bag and its contents, plus the feet hurting and stinging most uncomfortably (Agony almost, well, maybe not, but positively painful, Hehe!), I did enjoy the hobble back through the greenery and seeing the dogs taking their owner for a walk.

And the sun came out, giving me an opportunity to try and take a moody photo at the top of the footpath. It came out not too bad as it happened.

I turned right and saw the poor Tree Copse in front of me, looking all bare, abandoned and somewhat forlorn.

I reckoned it would be a good idea if I walked down the hill through the Copse and took some photographs as I walked down and came out at the bottom field.

So I rerouted and used the gravel footpath, instead!

I got some flaring on the photo I took half-way down to the flats.

A little disappointed with this I was. Humph!

A bit tricky at the bottom of the path, with mud and what looked like oil across the trail? 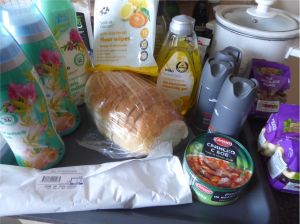 I got indoors and up to the apartment, and put the unwanted, unnecessary and unneeded purchases away.

Got the computer on, and two hours later I’d updated this load of blather up to here.

Got the Health Checks and medications taken. Updated the Diaries, written and Google.

Then I tended to the nosh and got the chips in the oven cooking.

Had a go at Facebooking while I waited.

I ate the lot of it! With a certain relish as well!

Rang Brother-in-law Pete, it’s his 70th today. Had a good gossip, cut short by the wet warm sensation from my lower regions.

More bleeding, I’m getting bleeding fed-up with this!

‘Herbert’ banging away merrily up above.

I settled down to watch some TV and waited for the Strobe Pillow Alarm to activate. Either it didn’t, or I was too tired and deep in sleep to feel it. For I was in the land of Nod very soon.