23:35hrs. I sprang awake, without the brain fully engaged. I seemed to out of the recliner and in the kitchen with the wind-up torch assisting me to do the Health Checks, almost

without me realising it?

The mind did join in with my bulbous body in activationalisationing when I dropped the torch and hit my shoulder on the cabinet in the dark when I bent down to pick it up. Tut-tut!

The BP readings were down. Good! 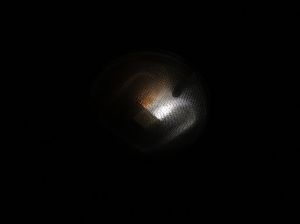 Needless to say, but the flickering bulb was doing its best to light itself, but it’s on its last legs now.

There is a more significant area of the tube gone brown/red, and the flickering had already brought on a Dizzy Dennis attack, that I could have done quite well without. Ah-well!

Off to the Porcelain Throne. Messy evacuation with a little bleeding on this occasion. The flickering light tube had also brought on vision problems, well, focussing. When I got on the computer, it seemed to take a bit longer for me to do things?

I uploaded the pictures taken, and found this unintentional mystery one shown on the left here on the old Sony SD card?

I made up the Thought of the day rhyme and graphic for the top of this page, using CorelDraw, and went to take the medications and make a mug of tea. The Morrison’s Assam, now one of my favourite brews.

It dawned on me that I had been up for around an hour now, and I’d only had two wee-wees! Remarkable!

Back to the computer. I found I was having difficulty, a sort of acataphasia as I started this blog off.

I got myself side-tracked for an hour or so, with updating my personal word list. Huh!

Every time I stand, this so-called bruise causes a sharp pain with every step taken. I’m still suspicious that it may be something other than a bruise. But again, it’s no foofaraw!

I went to the obnubilated kitchen, to make another brew of tea. Where I opened the window and tried to take a panoramic photo of the horizon facing me. I attempted ten 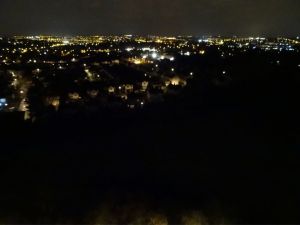 times to shoot it, but the old Sony camera kept informing me I was too slow, or shook the camera or was too quick for it to be recorded. Humph! I’ll have to but a larger tripod I can use in future.

This would have been no problem with the old windows layout. Tsk! So I took this picture. I might use it as a backdrop for a Morning Thought later on.

I started this blog off and got as far as here, then went to make a mug of tea. I used the torch again, to avoid the flickering light flashing, and avoid setting the dizzies off again.

Then I got on with finishing yesterdays Inchcock off and got it posted. Then went on to the WordPress Reader section, some good stuff on there today.

Then I considered my option in the jentacular field. I decided on a pot of porridge, and a few Scottish Highland Shortie biscuits would do me.

Beyond this point is all a blur I’m afraid.

But I did find this photo on the SD card in the morning.

I’m not sure what happened. But a memory blank for some reason?

I vaguely remember watching some TV later on I suppose.

No signs of any other meals, but tons of nibbling evidence. Tsk!